OKEx has suspended all cryptocurrency withdrawals, OKB token has crashed 15%

OKEx exchange has suspended all crypto withdrawals indefinitely. It is known that one of the exchange’s key holders is currently cooperating with a public security bureau in investigations and has been out of touch with the exchange.

Hours before the announcement, significant withdrawals of Ether, Tron, and Bitcoin were completed from known OKEx-affiliated addresses.

“The key holder’s being out of touch prevented withdrawal authorization from being completed. OKEx’s other functions remain normal and stable, and the security of your assets at OKEx will not be affected. We will resume digital assets/cryptocurrencies withdrawals immediately once the concerned private key holder can authorize the transaction.”

“OTC merchant on OKEx had mistakenly received 500,000 CNY from the fraud group and was hunted by the police across the provinces.”

Earlier, Wu had exclusively disclosed that the OTC merchant on OKEx had mistakenly received 500,000 CNY from the fraud group and was hunted by the police across the provinces.

“The Chinese government is cracking down on money laundering using cryptocurrency for telecom fraud, and centralized exchanges are in a very dangerous state.”

However, Wu’s information is currently unverified.

OKEX CEO Jay Hao claimed the key holder’s cooperation with officials was due to a “personal issue” and the investigation would not affect the business. 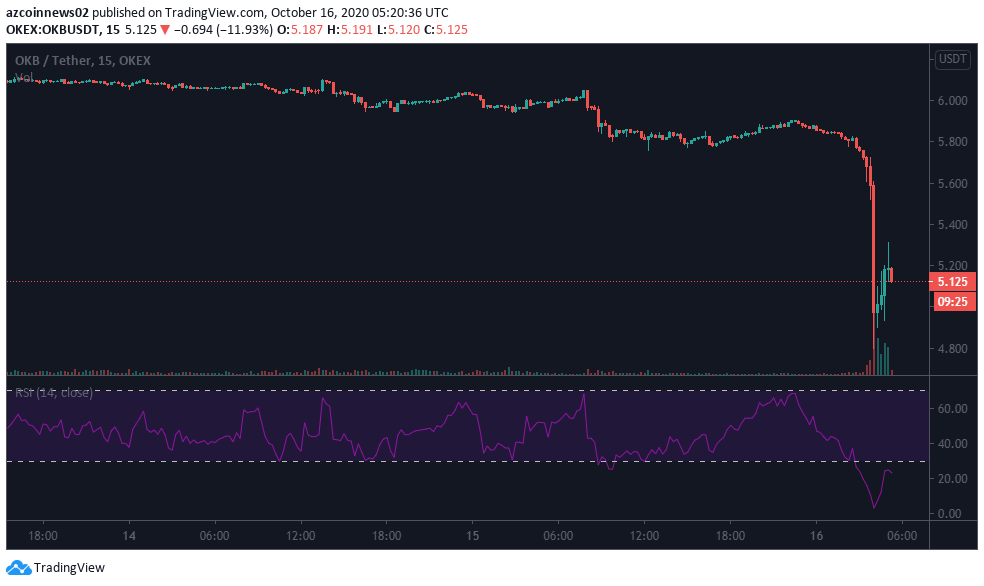 The price of Bitcoin on OKEx dropped 3% in 30 minutes after the announcement, touching $11,182 Friday morning, while OKEx’s native token OKB has crashed 16% trading at $5,2.

Grayscale Investments now holds 2% of all BTC and 2% of all Ethereum, suggested that the coin has a bright future ahead

Over 45,000 Bitcoin has been withdrawn from BitMex…

Bitstamp will migrate its customer accounts from its…

Due to heightened compliance requirements set by…

Coinbase continued to enjoy phenomenal growth with over…