According to data from BTC.com, Bitcoin hashrate indicates that the network of the largest cryptocurrency market is gradually being centralized and dominated by the two main mining pools. The special thing is that both companies are from China. So that means China is controlling the entire Bitcoin network.

Currently, the three largest mining pools control most of the Bitcoin hashrate. Of which, F2Pool now accounts for 21.8%, while AntPool and BTC.com account for 16% and 15.1% of the total BTC hashrate, respectively. 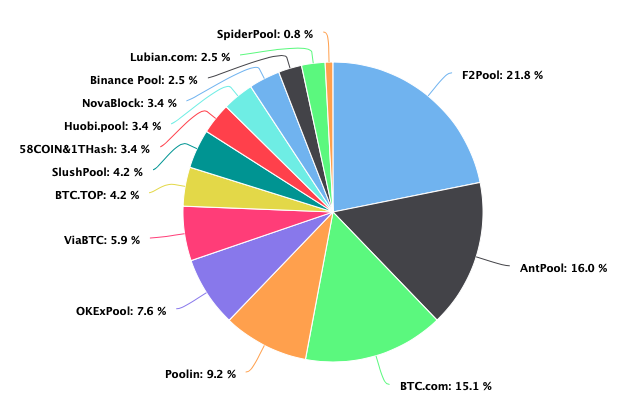 It is important to note that AntPool and BTC.com are both Bitmain. This means that Bitmain and F2Pool together control more than 52% of the BTC hashrate.

We all know that BTC hashrate once centralized is a dangerous thing. Because it will compromise decentralization – something that crypto always pursues, moreover, this centralization gives the two companies a significant ownership advantage in the Bitcoin network.

The cause seems to come from the Bitcoin halving event not long ago. Specifically, Halving has reduced the block reward by 50% significantly for miners. Moreover, many analyzes also point out that the Halving event will cause smaller miners to give up.

And yes, the Bitcoin hashrate after Halving also dropped slightly but then returned to normal.

How harmful is the BTC hashrate concentrated mostly in China?

China has long been a place of strong growth in cryptocurrency mining. In particular, the country is increasingly attracting increasing control over BTC hashrate recently.

According to a CoinShares report at the end of 2019, about 65% of Bitcoin’s total hash power is concentrated in China alone.

This is a worrying trend, as the Chinese government’s history of enforcing strict cryptocurrency regulations puts these mining groups at serious risk of eventually facing government conflicts.

Although mining is not explicitly banned in the country, CoinShares notes that it remains cautious about involving China’s explicit acceptance of the industry.

If these groups stop working, it will lead to Bitcoin hashrate witnessing a sharp decline, potentially creating some extremely short-term network bottlenecks.