Terra’s failure had dire consequences for many investors around the globe.

Cryptocurrencies and stablecoins can be used as an investment tool during times of financial turmoil and negative events (such as Russia’s invasion of Ukraine). In any case, allocating some wealth to this asset class sounds like a better move, such as buying in a war-torn area.

Based on that assumption, Yuri Popovich, now living in Kyiv, Ukraine, invested all of his family savings (about $10,000) in UST. At first glance, UST seems to be a less risky stablecoin than most volatile cryptocurrencies as it is said to be pegged 1:1 to the US dollar.

“I am not a speculator. I just want to save money,” the poor man said.

However, at the beginning of the month, UST lost its peg and is now hovering at just $0.02. Popovich revealed that due to the failure of the project, his investment was only $500. 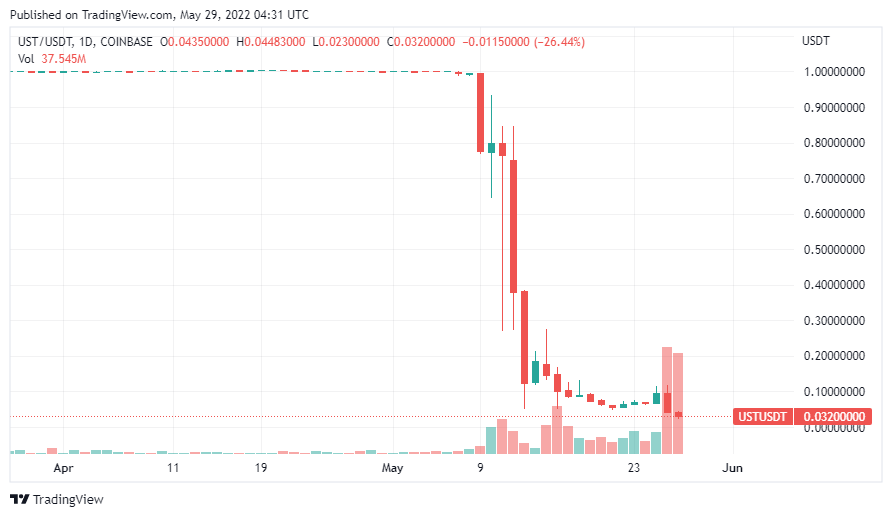 The terrible damage caused this person’s health to seriously decline:

“I lost sleep, lost 4kg. I have frequent headaches and anxiety. My wife is still unaware of this loss. I don’t know how to tell her.”

Popovich said the current living conditions in Ukraine are extremely harsh. The breakdown of UST and the “huge amount of money” the family has lost will make their lives even more difficult.

“This is too much money for us and is extremely important for life in the current situation. I worry about my health, my wife, and our relationship. I don’t even know how this is going to end.”

A 29-year-old man was discovered falling to the first floor of a building in Taichung City in the early morning of May 24. After receiving the news, the police carried out initial verification and assumed that the cause was a loss after investing in LUNA.

Through preliminary investigation, this person’s name is Wu Nan, rent a house on the 13th floor and live alone in Taichung. Checking the victim’s phone, he has recently complained to relatives and friends about the failures in investing in LUNA and is very depressed. Perhaps this is what made Wu think.

“A 29-year-old man in Taiwan committed suicide by jumping off a building after he was suspected of losing about $2 million in investment in Luna. Taiwan is very active in cryptocurrencies, NFTs, etc”

Earlier, an unidentified individual rang the doorbell of Terraform Labs CEO Do Kwon’s house. This person was said to be looking for the CEO, but at the time, only his wife was there.

The intruder was a LUNA investor who lost $2.3 million due to the bloody market. He explained to Korean law enforcement officers that many investors committed suicide because of catastrophic losses and demanded that Kwon be held accountable for those deaths.

Another person who has lost millions of dollars due to investment in LUNA is famous British Youtuber and rapper JJ Olatunji, aka KSI, who’s also an interested proponent of Bitcoin. He revealed that he has poured about $2.8 million of his assets into Terra’s native token, while his investment is currently worth less than $500.

Mark Zuckerberg: Metaverse strategy might result in losses for up to five years

BitGo has teamed up with litigation powerhouse Quinn…

Shiba Inu (SHIB) might still have room on the upside…

Shiba Inu (SHIB) forming a bottom pattern before the…