Many believe that the presence of large Bitcoin derivative markets such as CME, CBOE, and Bakkt will help Bitcoin gain many practical benefits. Among them, the most prominent is the acceptance from the mainstream or skyrocketing prices. This judgment is also quite controversial.

The still young Bitcoin derivative markets can potentially push and pull on the charts?

There is much debate about how the Bitcoin derivative markets such as the Chicago Board Options Exchange (CBOE) and the Chicago Mercantile Exchange (CME) affect Bitcoin spot prices. Especially when the regulated Bitcoin futures appeared in early December 2017, the price of Bitcoin increased rapidly. Some speculated that the run-up and meteoric rise of BTC to a December 17 all-time high of nearly $ 20,000 owed in part to the excitement surrounding CME and CBOE futures.

Of course, there are many other factors besides Bitcoin futures that are supposed to drive Bitcoin prices up in late 2017 and early 2018. One of them is Tether’s manipulation. But today we won’t mention it here.

While there are theories about financial giants manipulating the market by holding short positions in the futures market, and then negatively affecting the public’s awareness through the media, due to official communication, allegations of market manipulation are hard to prove. However, Bitcoin futures have provided investors with a discount on a new means to shorten the cryptocurrency market, and some speculate this is what happens before the next price drop into 2018.

Reaching an all-time high on February 6 this year, Bakkt’s open interest seems to follow the 17% BTC spot price increase starting on January 24. What makes sense is that the futures market can be affected by the spot price of BTC.

The proof was the record numbers for Bakkt in November 2019, and amid the market decline, institutional futures sometimes seem to hold their own. Of course, the product had just launched in September, and some might assign novelty and bullish sentiment regarding institutional involvement as the driving force there. Still, from November 2019 until the new year, BTC spot prices would hover relatively steady at just over $ 7,000, leading to speculation about the power of institutional involvement for spot price stability. 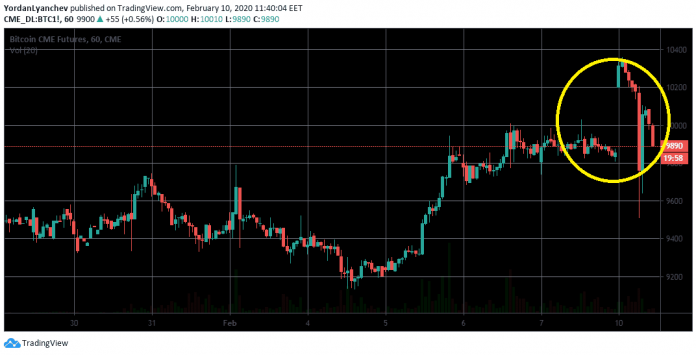 Example of a CME price gap being filled

The price gap in the futures market is another point of interest. In February, spot prices tended to follow and fill the price gap in the futures market. A gap in CME futures in that same month, for example, was followed by an almost immediate correction on the spot market when futures trading reopened. However, these predictions do not always pan out. Some recently predicted there was “no more gaps” on March 10, and that a bull run was in the works. Prices would plummet almost $ 4,000 in the next few days.

Although Corona appears, what affects Bitcoin is the institutional

Bakkt and CME’s bitcoin futures have been a significant hit due to the ongoing economic downturn due to Coronavirus fears and business and tourism outages. There is virtually no activity on the CME option market, and the same thing happens with Bakkt, even worse.

Elsewhere, CBOE announced that it would no longer offer Bitcoin futures contracts by March 2019. But, existing contracts can still be traded until expiration in June 2020. The question of whether the futures market and options can enter here with more significant numbers of contracts and unexpected speculators as in previous price drops is uncertain.

As the spot price of Bitcoin continued to be affected by the media and Bitcoin whales moving financial clout, institutional players like Bakkt and CME inarguably offer a relatively new and regulated forum by which movers and shakers in the crypto world can find novel ways to leverage markets, and by which analysts can learn more about BTC spot price and how it moves relative to these.

With heavy regulation, though, comes risk and dependence. Perpetually waiting for the SEC to approve a bitcoin exchange-traded fund, for example, doesn’t exactly sound like the Decentralized or permissionless crypto mainstreaming a lot of Satoshi acolytes want. Further, the more bitcoin moves into institutional money, the more sway these legacy and financial regulatory powers will be able to exercise over market prices, for better or for worse.