In the recent video, crypto KOL Lark Davis predicts that the altcoin market is ready to begin its massive rally in the month of April. According to Davis, the keys for his prediction mainly based on Bitcoin’s dominance and Ethereum’s performance. 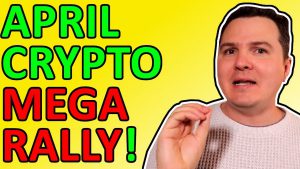 The crypto KOL explains that Ethereum is a “thermometer” indicative of the health of the entire altcoin market.

“Ethereum has up for 30% in the last 14 days. In contrast, BTC has “only” risen 7% in the same period… which means that ETH is outperforming Bitcoin by a ratio of 2 to 1”.

Ethereum has had a strong start to the year since 2019, followed by a correction and “cooling” in price, then jumping into a rally.

Hence, the market is now “poised” for a massive bull cycle, with ETH poised for significantly higher gains over Bitcoin, according to the trader.

On the second note, Davis also highlights that Bitcoin dominance has been “dropping hard”.

“This metric represents Bitcoin as a total share of the market… It is in a critical zone, in a key support zone… If support breaks, then it will be a crazy altseason. We have to wait for confirmation. If BTC continues to lose dominance, a rally for Ethereum begins and it could take the price to $3,000”, the trader says.

​Regarding the other altcoins, Davis predicts that cryptocurrencies with large market capitalization like Cardano, Litecoin, and XRP could rise by 2x to 5x. Altcoins in the top 20 could rise by 10x to 20x and smaller altcoins could rise by as much as 50x to 100x.

“Basically all of them will do that…even if Bitcoin’s dominance rises, altcoins would still post gains, albeit by smaller percentages”, Davis says.