Is Bitcoin price ready to conquer $ 10,000 again, or is it a temporary correction?

The Bitcoin price continues to be traded in a narrow price corridor as the market is waiting for new steps after recent sudden fluctuations.

The BTC/USD trading pair only fluctuated in a stable price area, ranging from $ 9,500 to $ 9,800 over the past two days. Earlier, traders were bewildered when Bitcoin dropped nearly $ 1,000 in just a few minutes, after encountering resistance at $ 10,500. Until now, we still don’t know what made Bitcoin so volatile, and the short-term trend of Bitcoin has become so much more unpredictable.

For analyst Michaël van de Poppe, even the latest setback is not a cause for concern.

I’m seeing this weekly view (yes, we still have to close) and I’m not seeing anything ultra bearish in particular.

So far: Just a corrective move in an up-trending market.

Even $8,800 wouldn’t be that bad. pic.twitter.com/IweOeGWOJO

Besides, technical analysis is making analysts much more confident. Historically, 2020 is still a record year for average prices in Bitcoin transaction volume. The proof is that Bitcoin has delivered a profit margin of 35% only in 2020, another indicator that Bitcoin is in the middle of a bull run that could last another 570 days.

When writing these lines, the Bitcoin price is testing the resistance level of $ 9,900 – $ 10,000. The horizontal resistance of $ 9,900 is also the retreat of Golden Fib (61.8%, located at $ 9,922). As can be seen on the following daily chart, this resistance is also a retest of the mid-term ascending trendline (highlighted in yellow).

While Bitcoin is in the middle of another weekend, we need to keep in mind a gap the CME Futures can expect at $ 9,830. Those gaps tend to fill up very quickly. 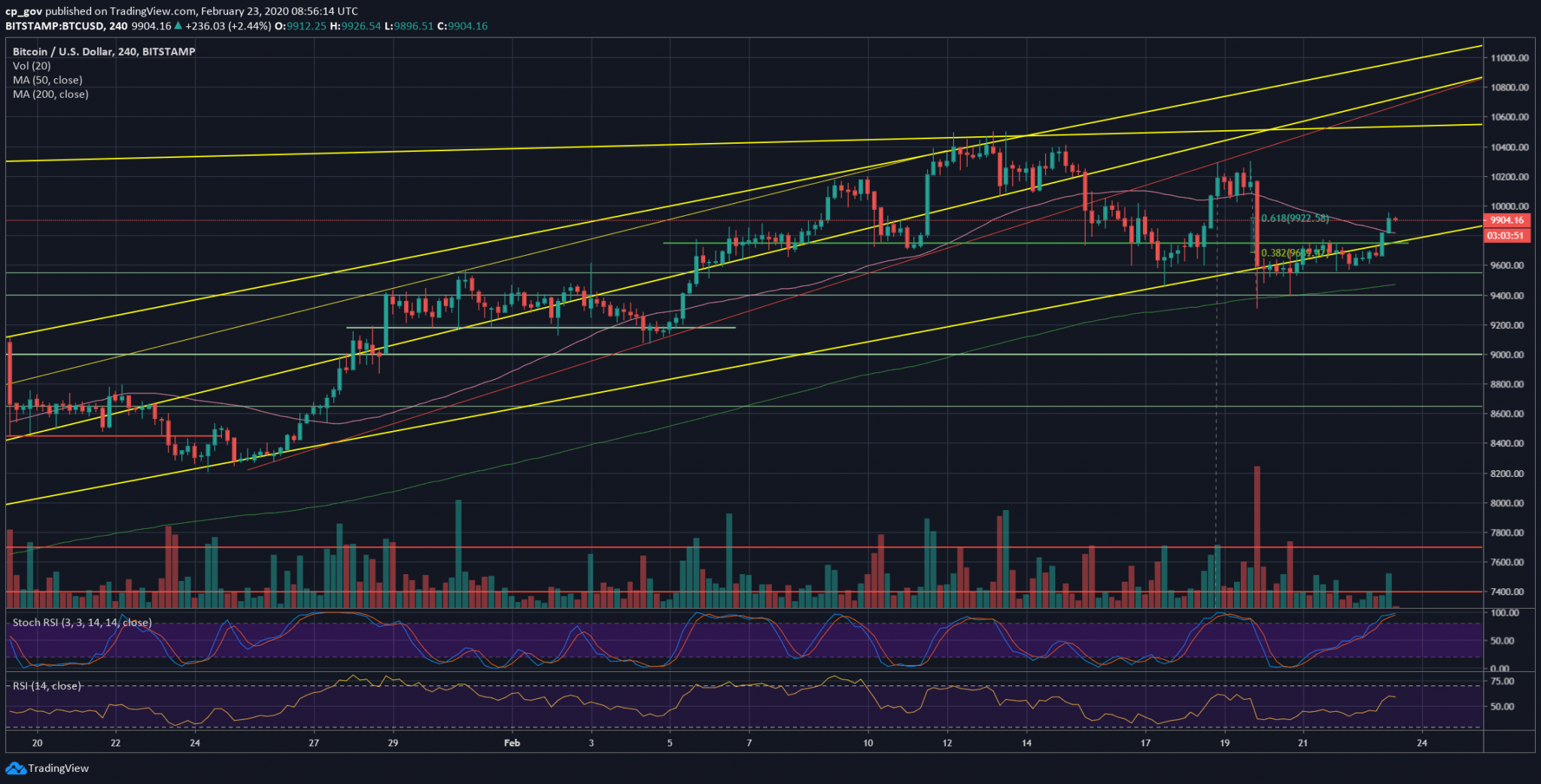 After falling sharply to the 50 RSI level, the indicator has found the necessary support and thus shows an increase. On the 4-hour chart (lower time frame), we can see a bit of bullish divergence starting to grow, possibly as fuel for the next step up.

Besides, the Stochastic RSI oscillator has created across the oversold territory. It is now about to enter the neutral area, which could be another sign of a short-term price increase.

Since Wednesday, we can see that daily volume candles are decreasing. Yesterday brought a small volume. This could be a sign that the next Bitcoin move is about to take place. As a reminder, during weekends, trading volume tends to be lower.

Altcoins also imitate Bitcoin price movements with low volatility. The top 20 most significant coins by market capitalization in the last 24 hours also moved on average from 3% – 5%, only EOS, and Cardano broke through with an increase of more than 6% in 24 hours. Ethereum (ETH) is almost flat compared to Friday and is currently trading at just over $ 271.

In other happenings, Chainlink is showing significant growth. Every day the number of new addresses is created, and the number of holders is continuously increasing. The positive of LINK is easily recognizable on many social media channels and can be considered a breakthrough for future prices.

However, after the peak, LINK had a 15% correction. Despite the significant adjustment, the parameters on the network are still very positive. Last week, 1,480 new addresses were created each day. This number overwhelms the number of addresses with a balance of 0, with only 862 addresses a day. As a result, the number of Chainlink addresses soared by 4,300 within seven days. A similar move takes place with addresses that are trying to hold a LINK.

According to statistics, there are more than 20,000 Chainlink holders, accounting for 20% of the total number of wallet addresses containing LINK. Meanwhile, 63.72% of the absolute addresses are considered “big boats” because they usually keep coins for 1 to 12 months. There are about 16,000 new accounts and accounting for a total of approximately 16.27%.

Chainlink had been stable in a relatively narrow price range last week. This zone is from the support of 4 USD to the resistance of 4.87 USD. This is an area that is considered not to be stationary, and Chainlink will follow only signals outside this area. At press time, the LINK price is fluctuating around $ 4.32, a slight increase of nearly 4% in the past 24 hours.

The total cryptocurrency market capitalization is $ 287 billion at press time, with Bitcoin’s market share at 62.6% – the lowest level since July 2019.

Former CFTC Chairman: Federal Reserve needs to issue a digital currency to catch up with the likes of the Chinese government

In Nanjing, Jiangsu, a Chinese person was recently arrested for embezzling around $250,000 of the company's budget…
Loading ... Load More Posts No More Posts