Bitcoin cannot be more legal than anywhere else. Japan has one of the most welcoming and positive climates for Bitcoin and cryptocurrencies. And it is no coincidence that it leads to many other countries in blockchain startups. Japan is perhaps the largest market for cryptocurrencies in the world, a feat not possible without the help of the government and positive welcome from essential stakeholders. Now we will see how to buy bitcoin in Japan.

In April 2017, the Japanese government issued a directive to list Bitcoin and other cryptocurrencies as a legal asset listed in the Payment Services Act.

Japan has been known as an advanced technology center around the world, with large companies like Sony and JVC, all local companies for many years now.

As a result, many of its leaders in government positions have worked with technology companies and technology giants in one way or another over time, opening the door to any technological advancement.

Japan’s efforts to promote innovation in Bitcoin and cryptocurrencies continue despite several dangerous failures. For example, the Bitcoin ecosystem in this country was severely affected in 2014 when the Mt. Gox has been hacked 650,000 Bitcoin. Furthermore, Japan’s National Police Agency reported that $ 540 million worth of digital money was stolen in the country in the first half of 2018.

But all of these failures seem to reinforce the determination of Japanese regulators to put in place measures that will close such incidents and accelerate the adoption of Bitcoin. The FSA, the country’s leading financial regulator, has published a draft report outlining the new cryptocurrency regulations.

New regulations indicate that regulators are taking proactive steps to deal with hacking incidents that have made it difficult for national exchanges.

However, these are just some of the positive measures being taken by the Japanese regulator in favor of Bitcoin and other cryptocurrencies. The country’s legislators are also proposing to reduce the tax rate on cryptocurrency investments.

Coinmama allows customers in almost every country to buy bitcoins using credit or debit cards. They charge ~ 6% for each purchase. Customers in Europe can also buy bitcoins with SEPA transfers for a lower fee.

Gemini is a US-based exchange that has expanded into several countries, including Japan. Owned by the Winklevoss twins, Gemini allows anyone to buy Bitcoin and several other cryptocurrencies with bank account transfers.

Gemini has a pretty high limit, with some of the best transaction fees available. Gemini has several methods of executing orders, such as market orders, execution or cancellation, and auction.

Buy Bitcoin in Japan at Kraken

Founded in mid-2013, Kraken is the largest Bitcoin exchange platform in the world, based on average daily trading volume. It supports deposits from US, British, Canadian, European, and Japanese customers. Deposits can be made via bank wire, SEPA, SWIFT, and bank deposits.

Buy Bitcoin in Japan at bitFlyer

bitFlyer is the largest Bitcoin broker and exchange in Japan, in terms of users, daily average volume, and capital investment. It is one of the largest Bitcoin exchanges in the world. You can send money via credit card or bank transfer, with the Quick Deposit function enabled for many banks.

Buy Bitcoin in Japan at Coincheck

Coincheck is a Bitcoin exchange based in Japan. Registered users can buy and sell bitcoins via bank transfer or credit card.

Buy Bitcoin in Japan at Bitfinex

Hong Kong-based Bitfinex has long been one of the largest Bitcoin USD exchanges in the world. Bitfinex accounts can only be funded by bank wire; their fees for accepting such transfers are as low as 0.1%.

However, in August 2016, it was hacked and lost about 30% of users’ money. While Bitfinex may be useful for purchasing large quantities of bitcoin, it is probably best not to use exchange until it adequately compensates for the affected user.

Buy Bitcoin in Japan at Changelly

Changelly agrees you buy bitcoins with Litecoin, Dogecoin, altcoins, and many other digital tokens. Changelly works in almost every country, but you’ll need another cryptocurrency to buy bitcoin. Exchanges happen practically immediately because Changelly never controls your tokens, only exchanges them.

LocalBitcoins is an escrow service that also helps fit bitcoin sellers and buyers. The most popular payment method for purchases is cash. However, users can advertise transactions for any payment method they want.

Buying bitcoin through a live meeting, guaranteed and facilitated by LocalBitcoin, maybe one of the fastest and most private ways to buy bitcoin in any country.

Bitcoin ATM is a little-used method to get, but it is feasible. They offer unparalleled levels of security, although there is usually about 10% of fees associated with them. If privacy is a big deal for you, this can be a great option. Only two of the Bitcoin ATMs are in the country, according to Coinatmradar. Both are located in Fukuoka. 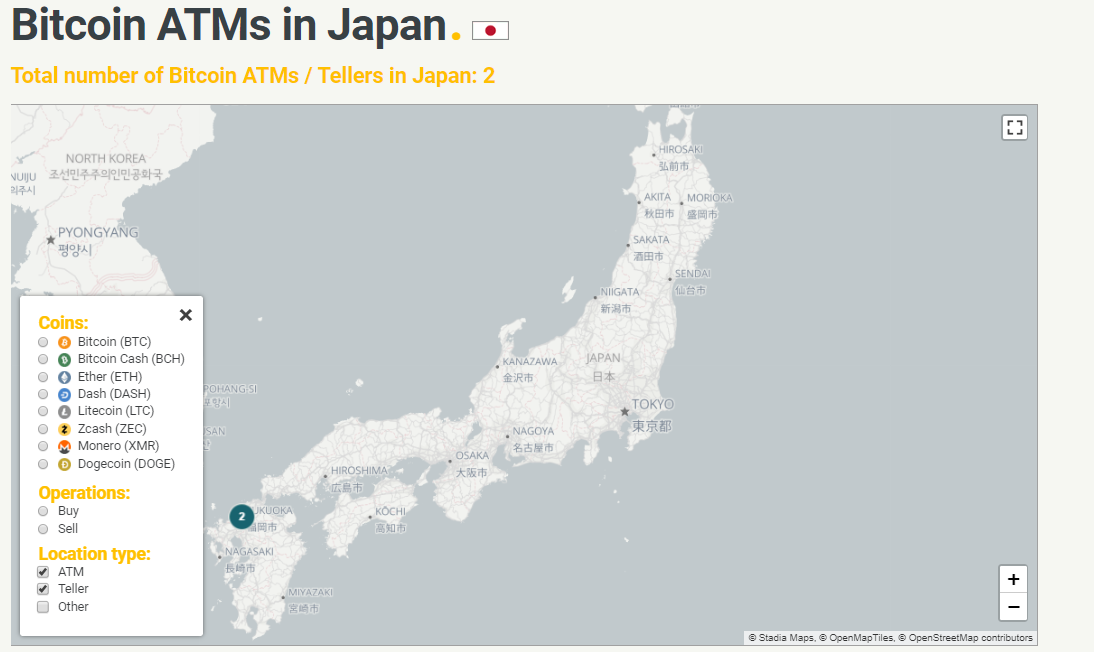 Binance Charity is looking to raise $5 million in…

Binance Futures is breaking into the Big Three of…