In the recent video, crypto KOL Lark Davis shares with his 267K subscribers the tips to make big gains on the market by buying these 5 high potential altcoins that the market has not paid much attention to. 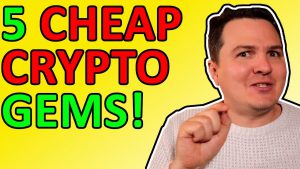 Polygon with its token MATIC is the first altcoin on the list. Polygon (previously Matic Network) is the first well-structured, easy-to-use platform for Ethereum scaling and infrastructure development.

At the time of the video, the market cap of this coin is $1.8 billion.

“In spite of the high market cap, I currently believe that this is a coin with some serious potential that the wider market really seems to not understand at this time”.

According to Davis, Polygon is the number one Ethereum layer 2 scaling solution which considering Ethereum’s high fees right now.

Polygon effectively transforms Ethereum into a full-fledged multi-chain system (aka Internet of Blockchains). This multi-chain system is akin to other ones such as Polkadot, Cosmos, Avalanche, etc. with the advantages of Ethereum’s security, vibrant ecosystem, and openness.

“I can still see Polygon doing a 10x from the current price during this bull run. But remember, it’s a bigger cap coin so don’t expect that to happen overnight this is a bit of a longer-term play here”.

The next coin on the list is Injective (INJ). According to Davis, this is a decentralized exchange and derivatives platform based on the Cosmos Tendermint, meaning that it is massively scaled.

Injective Protocol is a noteworthy project because it aims to solve problems in the financial world by employing blockchain technology’s decentralized nature. INJ allows investors to participate in a genuinely decentralized finance (Defi) organization, where they have the power to make changes happen and introduce new ideas.

Davis informs that Injective is still in the testnet phase. However, people can start staking the tokens right now to start earning some passive income.

“The testnet results have been very good so far and the upcoming mainnet release, I think it is going to be massive. Injective is currently at a very nice market cap for a pre-mainnet coin…Currently, it’s just under 200 million dollar market cap, and when the mainnet launches, I expect this coin will see some price appreciation and that it will cross into the unicorn status and be worth over 1 billion dollars in the total market cap”.

The third coin is Marlin (POND), a high-performance layer-zero blockchain network with a focus on delivering high-quality infrastructure for DeFi.

Similar to Filecoin which is incentivized IPFS, Marlin claims to be the equivalent of an incentived libp2p. This makes Marlin ubiquitous in the decentralized web as any peer-to-peer application relies on networking between distributed nodes to function.

At the time of the video, the market cap is just around a hundred million dollar.

“This is a coin that does have the potential to see some good price growth moving forward, if of course, they can keep nailing down those partnerships and delivering what they need to deliver in terms of technology, stake, rewards”.

Kava (KAVA) is the fourth coin on Davis’s radar.

Kava is a cross-chain DeFi lending platform that allows users to borrow USDX stablecoins and deposit a variety of cryptocurrencies to begin earning a yield.

“The platform offers very high earn rates on Bitcoin, Binance, Dollars and XRP, which makes it a very attractive option for those of you on the hunt for some hot and high yields, especially for XRP because you don’t get the potential to earn high yields on that in many places”.

Davis says that he has been bullish on Kava for a long time and he still thinks that it will be a billion-dollar plus market cap altcoin.

Last on the list is Open Ocean with its token OCEAN that is still in its token sale phase.

“Binance is a lead investor in Open Ocean and Cinance almost always lists the coins that they are an investor in”.

Ocean Protocol is a blockchain-based ecosystem that allows individuals and businesses to easily unlock the value of their data and monetize it through the use of ERC-20 based datatokens.

Through Ocean Protocol, publishers can monetize their data while preserving privacy and control, whereas consumers can now access datasets that were previously unavailable or difficult to find. These datasets can be discovered on the Ocean Market, where they can be purchased and later consumed or sold.