Grayscale Investments now holds 2% of all BTC and 2% of all Ethereum, suggested that the coin has a bright future ahead

It seems that in addition to a correlation with Bitcoin, the Ethereum price increase also comes from the catalyst of institutions acquiring a large amount of cryptocurrency, especially in the context that the DeFi space has begun to reach gets a lot of attraction. Specifically, Grayscale Investments currently holds 2% of all BTC and 2% of all ETH.

Grayscale is a digital asset management company owned by DCG that manages around $ 6 billion for institutional clients, such as hedge funds and family offices.

“Grayscale Investment’s Ethereum Trust has quietly up two percent of all ETH in circulation as of just recently.”

While everybody has been focused on our bitcoin accumulation, the @Grayscale Ethereum Trust now holds over 2% of all ETH in circulation

Furthermore, 2% of all ETH in circulation is around 2.25 million coins, currently worth more than $ 800 million. The announcement comes after the company announced that it had attracted $ 1.05 billion in deposits in the third quarter, a company record. $ 720 million of that capital has been transferred to Bitcoin alone. This mass accumulation of ETH comes as the cryptocurrency’s fundamental trends have suggested that the coin has a bright future ahead.

Grayscale was not the only one to do this, though. DTC Capital Head Spencer Noon said that the institutional concern for DeFi is mainly to realize investments in ETH, not in actual “yield farming” operations or DeFi coins themselves.

“My read on #DeFi after speaking with instl investors, fund mgrs, OTC desks, and FOs over the last few wks: The herd is coming. They’re excited about DeFi but new to it, so they’re buying $ETH first.”

However, Noon thinks that investors exposed to Ethereum but interested in DeFi will eventually increase the spectrum of risk to tokens once they become more comfortable with industry concepts and protocols.

Spencer Noon recently shared three key factors that show Ethereum is stronger than ever from an on-chain and underlying standpoint. He specifically pointed out the fees miners collect, the number of Ethereum-based contract calls, and the number of daily active addresses.

The controversial Ethereum Improvement Proposal (EIP) 1559 would have burnt 970,000 ETH in the last year, if it had been implemented. EIP-1559 seeks to reduce transaction fees by introducing flat fees alongside a burn mechanism. 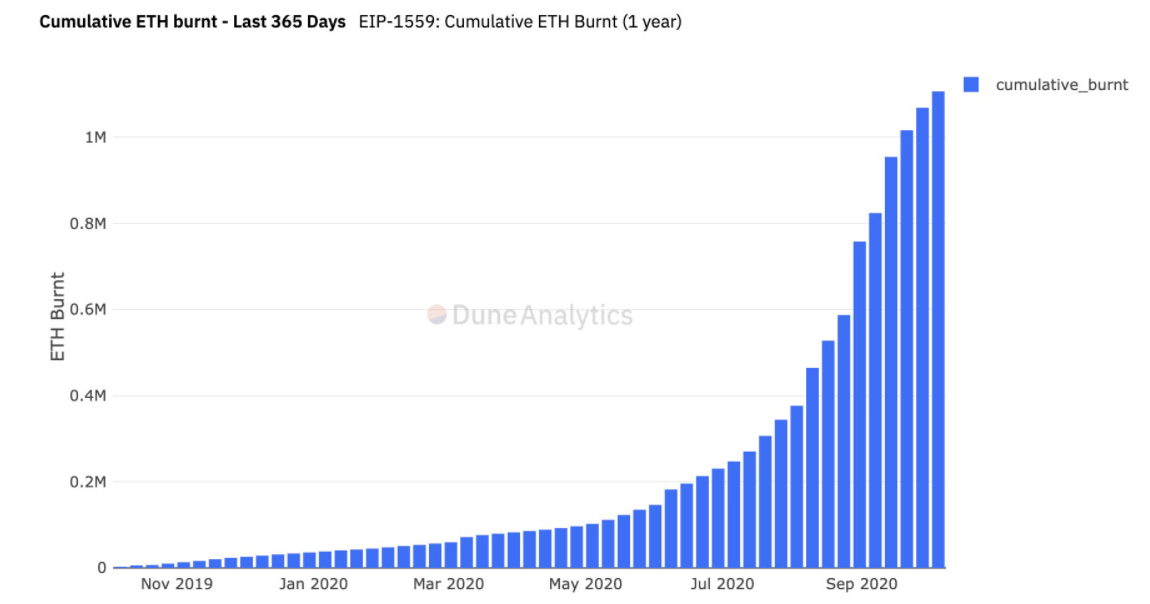 This is the idea first proposed by co-founder Vitalik Buterin. EIP-1559 proposes that all transactions have a standard flat fee called a base fee. This fee is burnt and the incentive for miners comes from users adding a ti on top of the base fee.

Although the idea of ​​a burning fee has long been considered, even before Ethereum’s inception block in 2015, the EIP-1559 was the first serious proposition to propose integrating this concept into Ethereum’s code. Since EIP-1559 will have a significant impact on how miners earn revenue, it has received quite a bit of support from the mining community. Just a week ago, Messari claimed that Ethereum fees surpassed Bitcoin fees in record-breaking two months.

In July, in response to the rising gas charges, Vitalik Buterin again called on the EIP-1559 as the last resort. Within a month of Buterin’s tweet, Ethereum’s total transaction fees surpassed Bitcoin’s before skyrocketing to an all-time high.

Transaction fee revenue is now nearing half as high as block reward revenue. This actually risks making ethereum *less* secure because of https://t.co/Dase8SL30z. Fee market reform (ie. EIP 1559) fixes this; another reason why that EIP is important. pic.twitter.com/eqU3tAMh67

This is not the first time, EIPs have divided the Ethereum community due to misguided goals. Last month, EIP-2878, which will drop 75% of block rewards, was also heavily criticized by the mining community.

OKEx has suspended all cryptocurrency withdrawals, OKB token has crashed 15%

“Sand Dollar”, the first CBDC in the world will be released next week

Ethereum price is breaking above a multi-week triangle…

Glassnode: Only 39.6% of Ether changing hands over the…

The Zinken testnet launch was a success, Ethereum 2.0…