According to the medium-term business strategy in 2022 in gaming giant Square Enix’s Q1 earnings report, they will expand NFT into more game products. 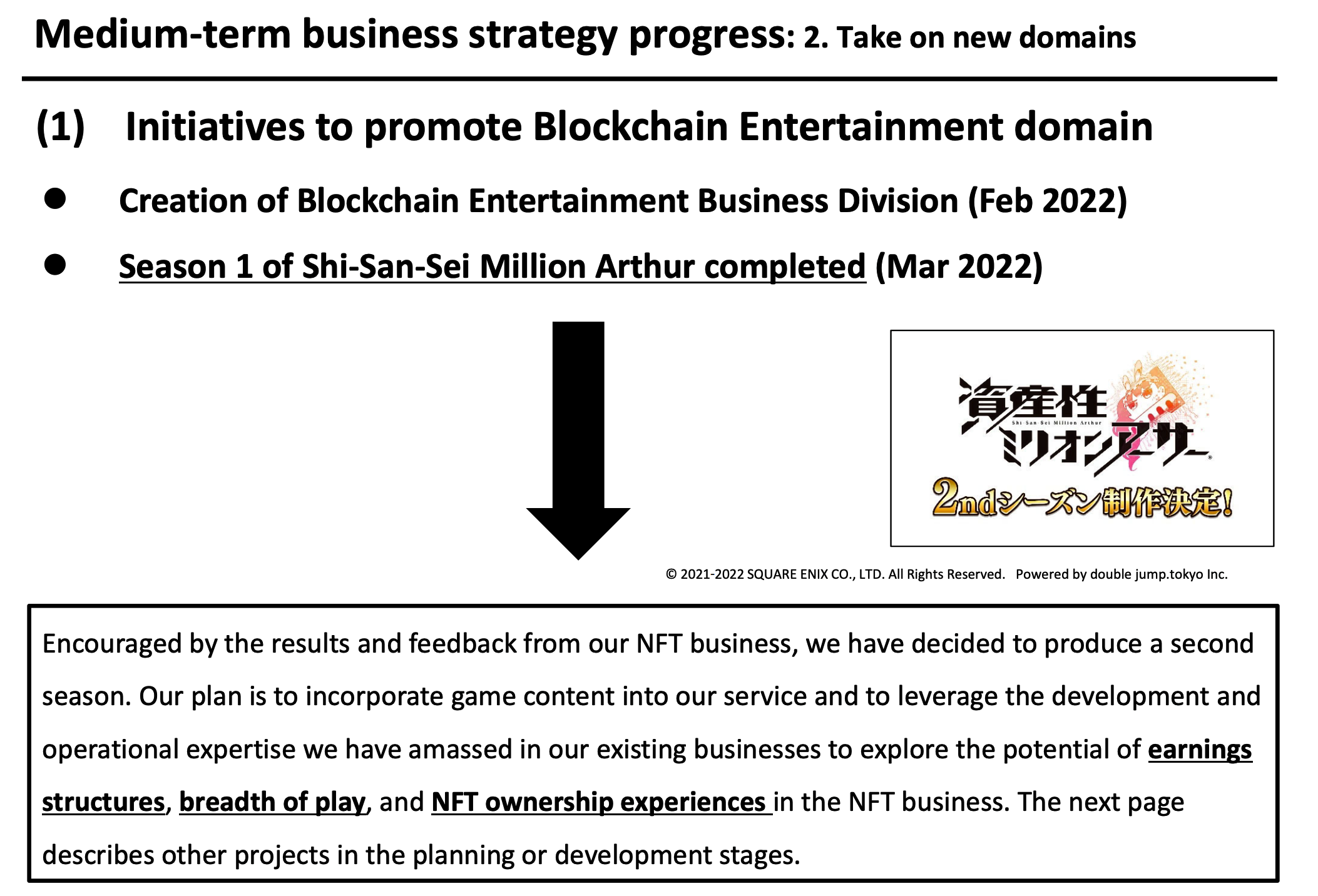 As you all know, Square Enix (SE) is a Japanese game developer with $3 billion in assets under management as per their latest earnings report. The company owns Final Fantasy assets and sold the Tomb Raider franchise for $300 million on May 3.

The report states that the company has been testing NFT on the Shi-San-Sei Million Arthur game starting in February of this year. The pilot program’s success will lead to the game’s second season of NFTs and will eventually see the company pursue broader activities in the NFT and blockchain industries.

Among the top priorities of blockchain domain initiatives, SE plans to establish regulatory clarity and guidance for blockchain games, address scalability in NFT economies and consider setting up a corporate venture capital unit.

The firm also stated that it plans on establishing an overseas entity that will handle “issuing, managing, and investing our own tokens,” suggesting the firm will begin creating an expansive gaming token economy.

SE worked with Web3 gaming and venture capital firm Metaverse Animoca Brands to explore its options in the blockchain gaming space. The partnership between the two companies is expected to grow as SE moves deeper into the ecosystem.

Animoca’s executive chairman Yat Siu believes that Square Enix’s influence in the gaming space will help the company establish a foothold in the blockchain gaming space.

The report places investments in and monetizing blockchain, artificial intelligence (AI), and cloud computing as the third objective of its medium-term business strategy. This is in line with CEO Yosuke Matsuda’s expressed intention of his company to get more involved in such technologies in January.

The popularity of Web3 and NFT games will remain strong throughout 2022 despite the overall downturn of the crypto market. Market tracker DappRader shows there were 1 million daily active players on May 14, roughly the same level as on January 1.

Huobi listed FUD – the token of the “FTX debt…

The attorney is taking a stand against allegations made in…

The most recent information following the victory on…

The most recent information following the victory on secondary market sales in Ripple ally v. SEC

Cumberland is commenting on the recent volatility and potential opportunities to take advantage of it. For further…
Ripple News

In a long-running litigation against Ripple, John Deaton, an attorney and well-known member of the XRP community,…
Ethereum News

The Ethereum Name Service (ENS) DAO has approved a proposal to sell 10,000 ETH in order for the project to have…
Ripple News

The most recent information following the victory on secondary market sales in Ripple ally v. SEC

South Korean authorities have sent people to Serbia, the country said to be the current location of Terraform Labs…
AZ -News

The creator of the NFT collection Bored Ape Yacht Club has recently settled a lawsuit with one of the developers…
Loading ... Load More Posts No More Posts