FTX’s valuation hits $32B after raising another $400M

FTX has reached a $32 billion valuation following its most recent $400 million funding round, according to an announcement Monday.

Led by founder and CEO Sam Bankman-Fried, FTX is one of the leading centralized cryptocurrency exchanges in the world with over five million active users. It has its headquarters in the Bahamas.

A January 2022 report shows that FTX is the fastest growing exchange globally in 2021, growing 600% in trading volume throughout the year. During this time, the exchange has raised more than $1.3 billion from notable investors such as Sequoia, Paradigm, SoftBank, and Tiger Global, including a funding round last July that brought in $900 million and valued FTX at $18 billion; followed by the October round of the same year, which raised $420 million and raised the company’s valuation to $25 billion.

The exchange has announced that it will use the newly raised capital for mergers and acquisitions. In the past, the exchange acquired crypto portfolio tracking app Blockfolio, as well as LedgerX, a fully regulated crypto derivatives trading platform. This month alone, FTX also launched a $2 billion venture capital fund in partnership with Lightspeed, called FTX Ventures.

The exchange’s native token, FTT, is up more than 8% following the news and amid a market rally following a dismal January end. The token is currently trading at $43.4, marking a 48% drop from the all-time high of $85 recorded last September. 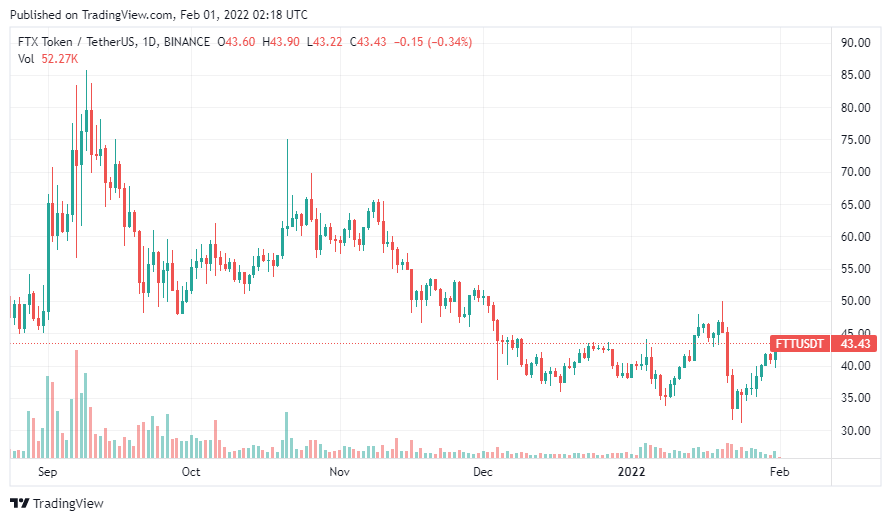 In another development, the FTX CEO is betting on two Ethereum destroyers for the next two years, SOL and AVAX. Sam Bankman-Fried said that aside from crypto OGs, BTC and ETH, he finds the two altcoins very promising as both are well positioned in the market.

Regarding Solana, the CEO thinks it has “done something that very few chains haven’t even thought of testing.” As for the scaling problem, he said:

“They’re one of the only chains with a real future-proof path to scaling to the level you need to get to if you want to use it on an industrial scale.”

Meanwhile, Bankman-Fried saw the potential of Avalanche as great. He believed the team behind the project knows what they’re doing, though, he’s expecting more in terms of scaling.

“That doesn’t mean I know best and they don’t. In the end, they can be on the right track for what needs to be prioritized.”

He went on to add that it was “a real chain, it’s a cool chain, and I think that there’s a world in which it gets absolutely huge.”

What Is Going On With Dogecoin

Over $1 billion on Anchor Protocol liquidated in just…