Ethereum price down 15% in the past 24 hours, actually making it one of the worst-performing cryptocurrencies in the top 20

Ethereum price has dropped 15% over the past 24 hours, making it one of the worst-performing names in the top 20

Analysts contend that Ethereum can stretch to a decline, even after a drop of more than 30% in about 48 hours.

According to the crypto trader and chartist CryptoHamster, ETH yesterday lost a significant level of support. At the time, if Ethereum lost the support shown on the chart, then there could be a move towards $ 290, as that’s where macro support for the coin is.

“#Ethereum has formed a broadening formation that normally has no preferred direction of a breakout. The bottom of the formation matches a long-term S/R level. If it is broken, the next potential target is at ~290$ – the second support and a 50% Fibonacci retracement.” 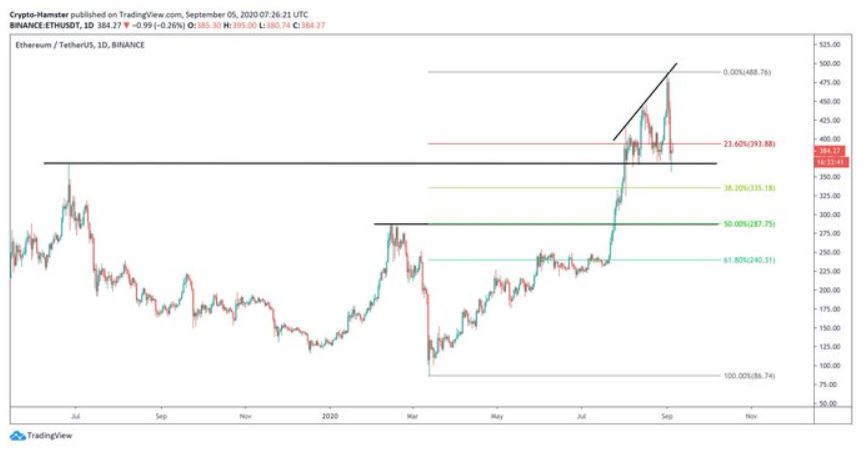 Other analysts are eyeing $ 290, not just the one mentioned above.

Trader Cactus notes that on a macro scale, $ 295 is a level that Ethereum must hold to maintain an uptrend.

“Truth of the matter is that our region around $295 is the strongest level of support we have on weekly plus timeframes, this would be a major buying region… Personally I have added here at $350, this was my first buy fill in the past few months, next bid $320!”

A good start for ETH is also suitable for BTC

A good start to the Ethereum bull case is when BTC is also ready to recover from here.

Crypto analyst Michael believes that since Bitcoin hit the liquidity pool as low as $ 10,000, a rally is probable.

Whether or not bulls can continue holding Bitcoin above $ 10,000 should offer some insight into its near-term outlook. However, exactly how this translates into ETH price action remains to be seen.

Bitcoin price has undergone a strong correction, falling around 20% from its year-to-date highs over the past few weeks, what’s next?

Changpeng Zhao decided that the SUSHI list was just because of the traffic, the community was filled with outrage

ETH may soon hit a new ATH after ETH reserves on…

Google Trends: More people are searching for the word…

Ethereum price has been rocketing higher throughout the…

In just 48 hours, Ethereum price rocketed over 50% from…

Ethereum price went up more than 400% last year, while…

With Ethereum price crossing $750 for the first time in…