While many people believe that the cryptocurrency market will increase after the Bitcoin Halving event, reality shows us that things are not as expected. At press time, the Bitcoin price has dropped to under $ 10,000, hovering around $ 9,508. Meanwhile, ETH’s price has fallen by nearly 2% in the past 24 hours, hovering at about $ 234. The Options market is evidence of that after Ethereum Options volumes on the crypto-derivatives platform Deribit broke yet another record.

Ethereum Options volumes on Deribit broke yet another record

The derivatives market saw significant growth after the March crash. The Options market is evidence of that after Ethereum’s Options volumes on Deribit broke yet another record after it skyrocketed to a new high of $ 30 million on 1 June.

According to Skew, the Open Interest also achieved a new ATH on the same day with a record of $ 136 million. This shows that the level of interest of traders is increasing. In particular, many of them have predicted ETH prices will make great strides in the coming days. 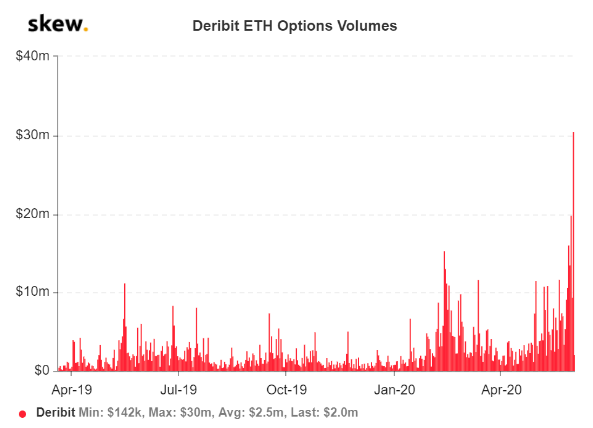 The aforementioned development in the Options market coincided with the ETH bullish price action nearing the $ 250. And when ETH is showing many signs of weakness in the past few days.

Ethereum saw another attempted breakout against its Bitcoin trading pair on 31 May. This was the third attempted breakout this year, indicative of a possible highly volatile period in the near-term. Additionally, Ethereum’s 25d Skew dived below the zero-line, with the same hovering in the negative zone, at press time. 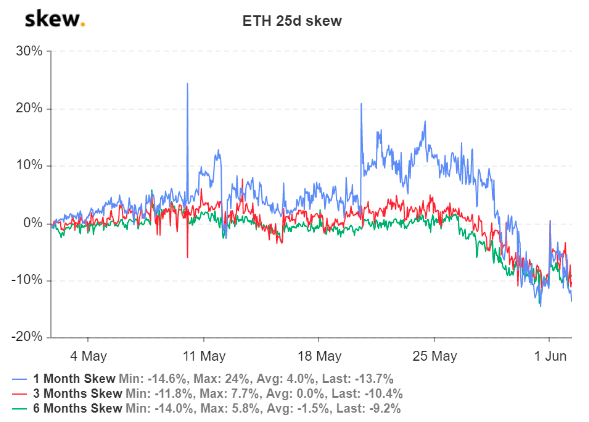 The impending volatility that market traders expect may be due to the upcoming launch of ETH 2.0. This sentiment was underscored by the strong performance of another metric on the chain when cryptocurrency analytics firm Glassnode revealed that the number of addresses held above 0.1 ETH reached an all-time high of 2,931,809,000.

The immense growth this figure has seen as of late points to massive adoption amongst retail investors – a group that was the primary suspect behind the 2017 parabolic run. This investor base could help fuel the crypto’s growth in the weeks and months ahead.

Join our ETH 2.0 Group for trading and update here.

A maintained defense of $210 could be enough to allow…

Vitalik Buterin: Ethereum is gearing up to supercharge…

ETH price confirmed a death cross formation could cause…

$500k in ETH and other altcoins stolen in hack from a…