Ethereum’s long-awaited transition to Proof-of-Stake (PoS), known as “the Merge”, could be running ahead of schedule to occur on September 15 or 16, according to Ethereum educator and cybersecurity professional Anthony Sassano.

The Ethereum mainnet merge has been tentatively scheduled for around September 15th/16th.

The Merge is coming 🐼

Date of Ethereum Merge Has Been Revealed

“The Merge is coming,” Sassano tweeted early Friday morning, saying the information came from a core developer consensus layer call. The Merge will see Ethereum transition from using a Proof-of-Work consensus mechanism to PoS and had been slated for completion on September 19. While the exact date could still be changed, the successes of the various testnet merges could be a promising sign that the Ethereum mainnet will transition to PoS consensus next month without issue.

It is worth noting that this is the tentative launch date, which means that the upgrade could still take place a few days later. It is hard to predict when exactly the much-anticipated upgrade will take place due to possible issues. First, the beacon chain will have to activate the Bellatrix upgrade, which is now expected to take place on Sept. 6. Tim Beiko, one of the leading developers at the Ethereum Foundation, has confirmed that the current version of the blockchain will have a specific terminal total difficulty (TTD) of 58,750,000,000,000,000,000,000. 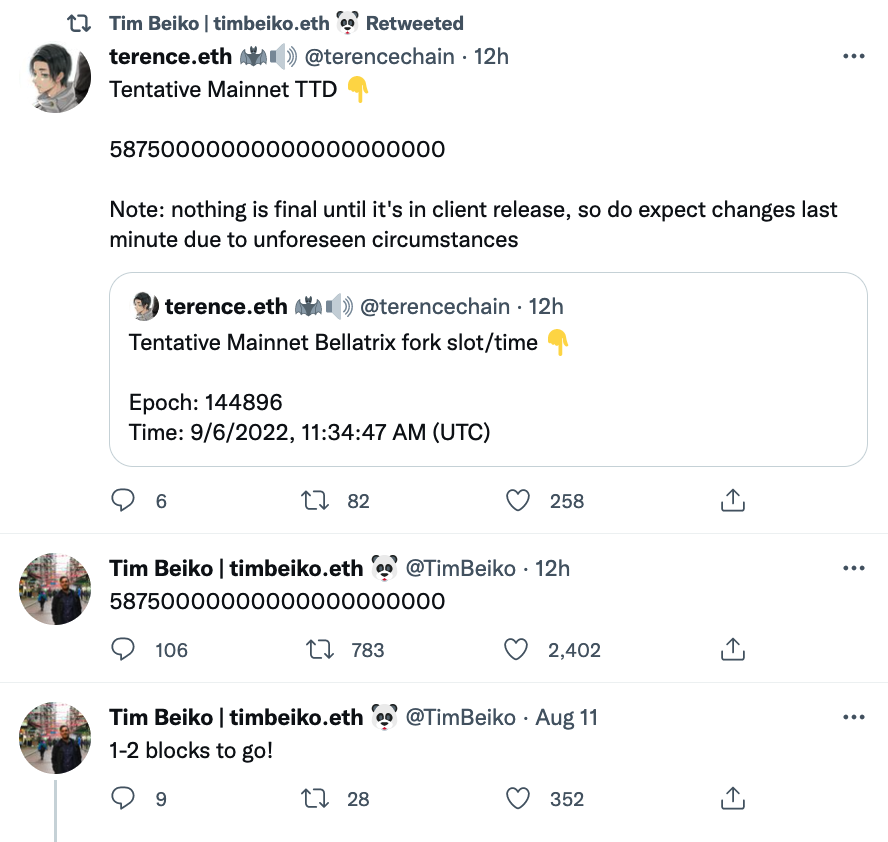 It will mark the final block mined on the proof-of-work version of Ethereum. The next block will be mined with the help of PoS. According to developers, Ethereum will consume far less energy after the much-anticipated upgrade, which has been delayed on multiple occasions. Ethereum miners will be pushed out of business following the upgrade. Those who do not want to comply with the upgrade will likely attempt to fork the network. EthereumPOW, the most prominent effort so far, is already gaining traction with some exchanges.