Not long ago, the development team behind Ethereum DeFi’s Curve Finance protocol announced it would launch a CRV native governance token.

Someone deployed $CRV based on smart contracts we had published on github, front-running our efforts.
While we initially were skeptical, it appeared to be an acceptable deployment with correct code, data and admin keys.
Due to the token/DAO getting traction, we had to adopt it.

In the project’s Telegram channel, the pinned notice reads:

“The Curve team is proud to announce that the CRV token of Curve Finance has officially launched. CRV will reward the liquidity providers in Curve pools.”

After an anonymous user actively implemented the open-source CRV token and CurveDAO contracts on the Ethereum mainnet earlier in the day, upon a successful review, the Curve Finance team confirmed the contracts as valid.

The CRV launch was controversial as contracts for cryptocurrencies were technically deployed hours ago. During the period between the announcement and the implementation of the smart contract, people with knowledge of Solidity, the Ethereum smart contract language, could use CRV without much competition. 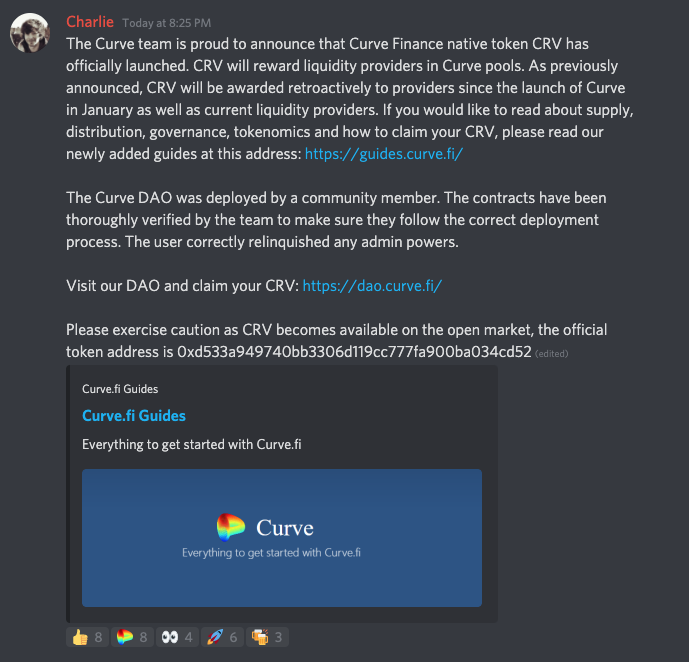 Although the contract was rolled out, many users later discovered that quite a few wallets skate Curve and earned CRV tokens ahead of the official launch announcement. This seems to be an unattractive action and creates unfairness and transparency in information for users.

However, the project administrator did not consider this a significant problem as only a handful of CRVs were released during this period.

Several CRV tokens will be awarded in each block; If you were the only one competing, you would get all CRVs in one block. Meaning, about 20,000 CRVs were given out to early investors before Curve’s official announcement. Perhaps, one of those wallets or more belongs to the developer who launched CRV soon.

This situation has resulted in a robust launch for a highly anticipated release from Curve Finance – one of the most anticipated projects in the DeFi market.

Earlier in the day, the Curve project leader pleaded with Curve users not to deposit money into an unconfirmed token address until the team did an appraisal. But now that the most anticipated CRV is officially released any user who has provided liquidity to the protocol is entitled to receive the CRV.

The release of a new governance token for the stablecoin platform Swap Curve Finance DeFi signals another step in spreading decentralized governance plans across the DeFi ecosystem. Furthermore, this suggests a growing expectation that such events also bring big profits for liquidity providers.

The CRV token issuance will initiate a transition to distributed governance managed through CurveDAO, which will also launch today. Blockchain security firm Quantstamp has audited both the CRV and CurveDAO reward mechanisms.

UNI price short-term outlook is dim as Bitcoin and ETH…