According to CoinMetrics, Ethereum capitalization has increased by nearly 50% in January so far to tag new all-time highs above $ 70 billion. Thus, Ethereum’s realized cap has more than tripled since dropping below $ 25 billion during March 2020’s “Black Thursday” crash. 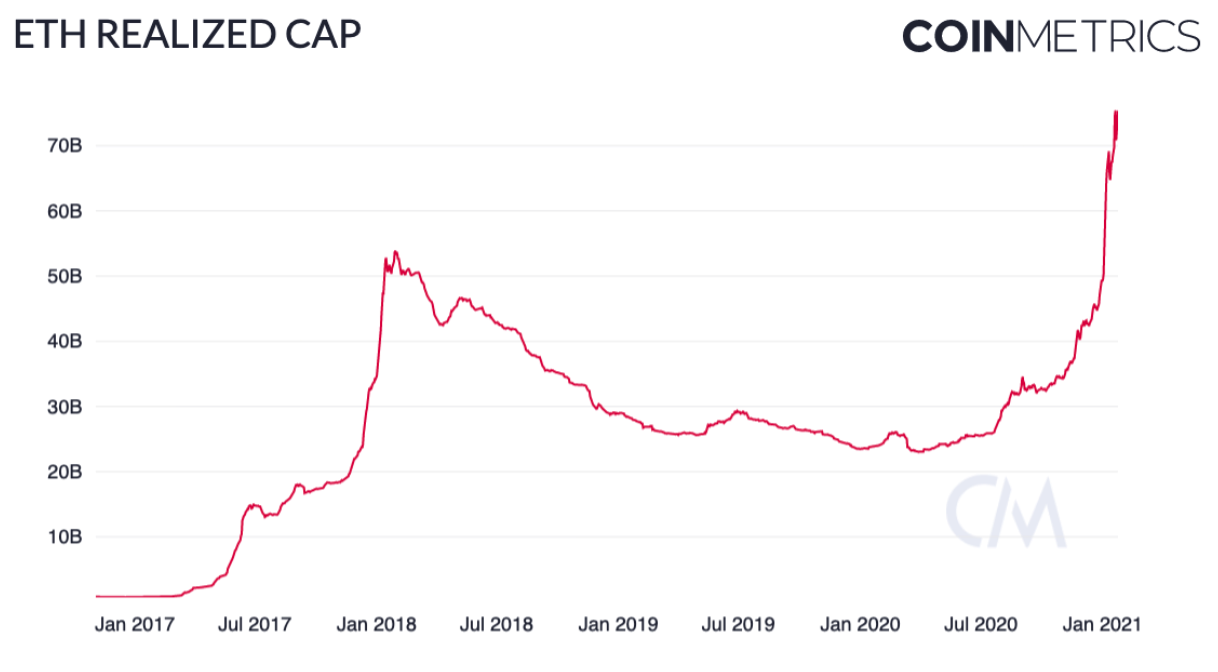 The realized capitalization metric calculates the value of a crypto asset’s supply according to when each unit last moved on-chain. The indicator seeks to estimate the price actually paid for each ETH in circulation — rather than simply multiply the current price by the total supply as the market cap does. However, the realized cap cannot account for coins that are only traded on centralized exchanges and do not move on-chain.

The indicator is designed to offer a way to compensate for lost or unclaimed coins by ignoring their appreciation from the time each unit was last transferred on-chain.

By ignoring the fluctuating capitalization of dormant coins, the realized cap offers a signal for when new capital is flowing into a given market, with CoinMetrics inferring that many new investors may have been buying the bags of seasoned ETH whales during January’s bull market.

“A 5% spike in the number of Ethereum addresses holding more than 10,000 Ether, with 1,241 wallets currently holding $13.8 million or more in ETH. As such, institutional investors are starting to buy ETH.”

The growth of Ethereum’s realized cap appears to have outperformed that of Bitcoin’s last year, with Glassnode reporting that BTC’s realized cap had grown 50% since the beginning of 2020 as of Dec. 15. CoinMetrics’ data indicates Ethereum had seen an 85% increase over the same period.

Blockchain Center’s Flippening Index currently estimates that Ethereum is 71% of the way to surpassing Bitcoin according to eight key metrics — comprising a new all-time high for the indicator.

The index notes Ethereum has already surpassed Bitcoin by transaction fees and transaction count and estimates that transaction volume and node count are at 99% and 97% of Bitcoin’s respectively.

Ethereum surged past yet another milestone, with ETH…

Goal of the analysis Establish lower, middle and upper bounds for how much miner revenue will be burned Analysis…
Breaking News