Eterbase tracked the hacked funds and discovered they were sent to Binance, Huobi, and HitBTC, CZ already on it

Days after being hacked and hacked for $ 5.4 million, cryptocurrency exchange Eterbase announced it had tracked a portion of the hacked money and discovered them from Binance, Huobi, and HitBTC. Even Binance CEO ChangPeng “CZ” Zhao participated in the search for the trail.

#Eterbase will continue with operations!
Our investigation shows a big part of stollen funds ended up on @binance, @HuobiGlobal, and @hitbtc.
Your assistance will be appreciated.
Thank you!@cz_binance #compliant #EU #cryptocurrency #exchange #trading pic.twitter.com/VWzbqU26NZ

Eterbase discovered traces of the hacked funds from Binance, Huobi, and HitBTC

After the incident, Eterbase asked exchanges to support and reassure users that Eterbase will remain “forever.”

Launched in 2019, Eterbase is a relatively small exchange platform based in Slovakia. They describe themselves as “Europe’s first ever-compliant cryptocurrency exchange.”

On September 8, the company announced on its Telegram channel that some of its hot wallets had been compromised. These include Bitcoin addresses, Ehereum, Tron, Tezos, Algorand, and Ripple. Initially, Eterbase did not disclose any further details other than that it had initiated an investigation of the hackers. However, the exchange later admitted that the total stolen amounted to $ 5.4 million. 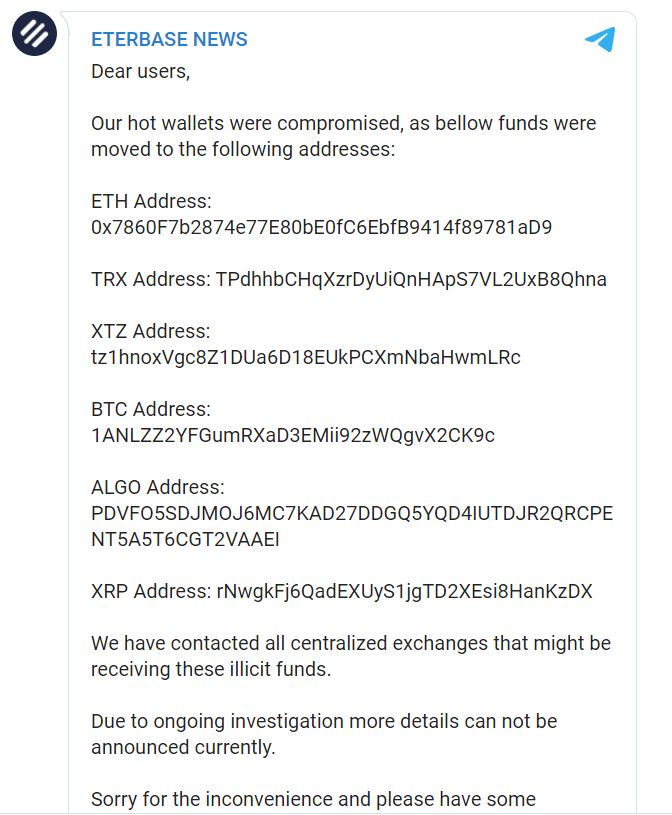 Eterbase also stressed that they had informed law enforcement and had started a joint investigation.

Despite the unfavorable developments, after some well-known global firms completed an audit for Eterbase, the company pledged the following:

“Our operations will continue.”

We want to inform our users that we have enough capital to meet all our obligations, and at the same time, we want to reassure everyone that this event won’t stop our journey!https://t.co/8XwoPovHNZ pic.twitter.com/h8kur4fqxI

After an investigation, Eterbase discovered that the destination for part of the total hacked money was Binance, Huobi, and HitBTC.

At this time, CZ took action to rescue. Binance CEO Changpeng Zhao (CZ) was the first to respond.

He asserted as follows:

Our security team was on this quite early. Will do what we can to assist.

Previously, Binance launched an initiative last year called Bulletproof Exchanger to help in similar situations. This tool will identify and track harmful activities related to cryptocurrencies or companies in the ecosystem. When such volatility is found, Binance will cooperate with the authorities to remove them.

Bulletproof Exchanger has successfully assisted some investigations. Most recently, Binance collaborated with Ukrainian law enforcement to identify and arrest a group of cybercriminals believed to be responsible for stealing more than $ 42 million through attacks and blackmail ransomware.