Dogecoin whale activity reaches a 3-month high, will it reach $0.14?

According to Bitrue analysts, Dogecoin price might reach $0.14 next if the $0.09027 barrier, and ultimately the $0.1 psychological level, are taken out. Dogecoin rose another 16% recently, adding to the significant gains made over the weekend. At press time, the coin has trimmed its 24-hour gains and is now down at $0.0805. 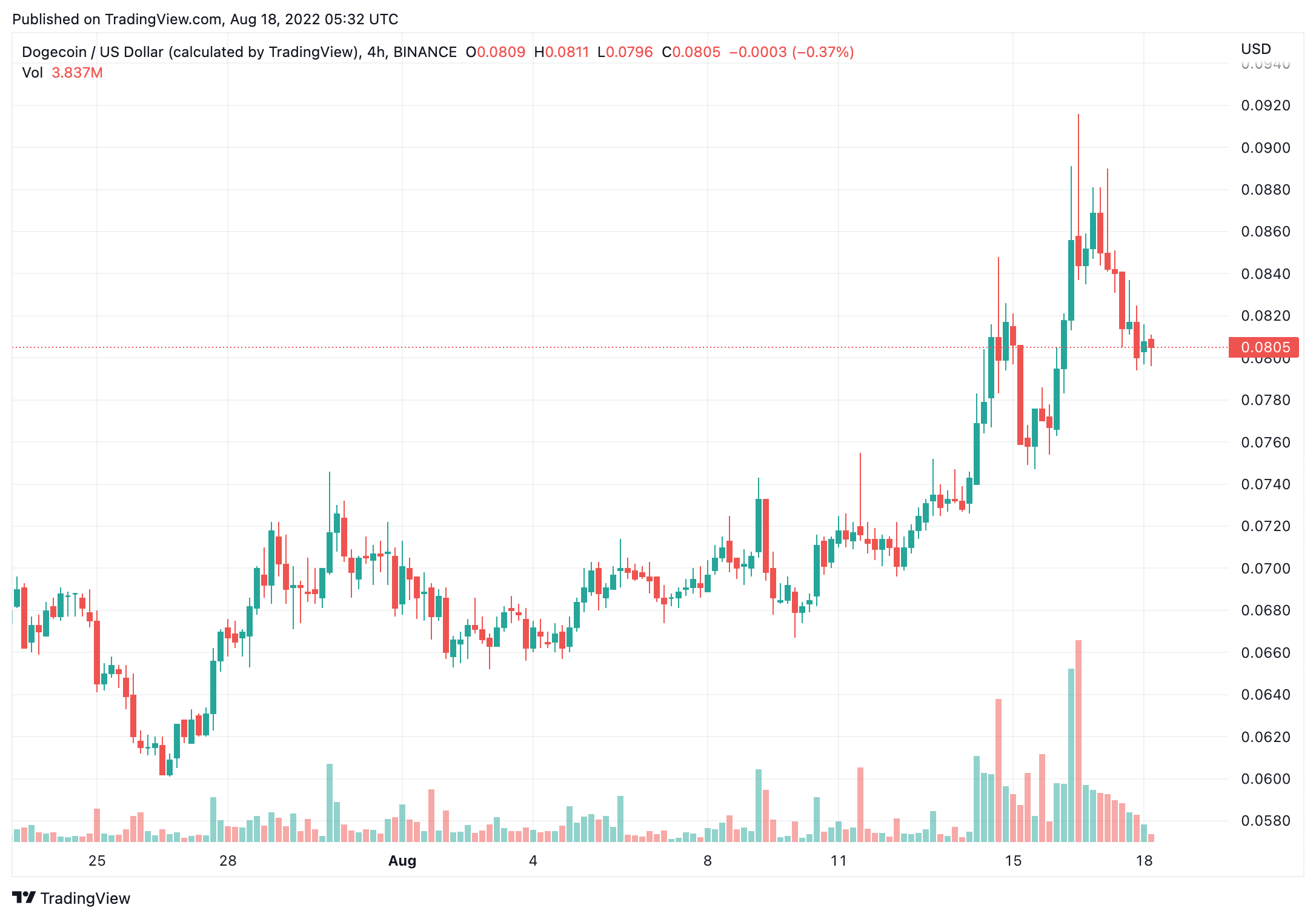 However, DOGE remains up 14.60% weekly, according to data from CoinMarketCap. Many incorrectly connected the launch of the “Dogechain” testnet release with Dogecoin’s price spike on Aug. 16. The Dogecoin community has come out to state that the said “Dogechain” test network was never launched by the original Dogecoin network. The said “Dogechain” project claims to bring utilities such as NFTs and DeFi to Dogecoin, which it says is made possible by putting “wrapped DOGE coins on the smart contract bridge.”

$DOGE: $0.09027 proven to be the nearest resistance, if the price breaks this level, then $0.1 will be the next target. Optimistic scenario will be the price hit $0.14 which is the June level before the crash. pic.twitter.com/nz2EDLcmd8

The Dogecoin community has raised multiple red flags concerning the project while maintaining that the “Dogechain” project is not related to Dogecoin or any of its developers in any way. Per Santiment data, whale activity may have partly helped Dogecoin’s recent run-up. Dogecoin whale activity reaches three-month high On-chain analytics firm Santiment notes that whale activity has reached a three-month high on Dogecoin: “Whale activity on altcoin networks is picking up steam in a hurry this week.” It noted that “by counting the amount of $100k+ valued transactions happening daily, Dogecoin has increased its large transaction frequency.”

Nor is @blockio‘s Dogecoin wallet & block explorer https://t.co/bEJPpAJfQn, which has been a core service and part of the Dogecoin Community since 2014.

According to crypto analyst Alex Kruger, “You can always count on dogs to fire up a trader’s animal spirits.” The analyst also stated of the dog run, ”Dog coins ramping up marked the end of the two 2021 bull runs. However, dig in and you’ll notice this dog run just started and is news driven. The DOGE run in particular looks sounds to me.” In the words of Dogecoin creator Billy Markus, or Shibetoshi Nakamoto, ”Dogecoin is, at heart, just a shared database and network to add verifiable transactions to that database to move around virtual coins with the doge meme as a mascot.” He continued “the rest is just about how people have decided to use it and value it. crypto is simple. people are complicated.”