The biggest memecoin on the market, Dogecoin, entered the top five most profitable digital assets from the top 100 of CoinMarketCap following another token, Shiba Inu, which got ‌higher. 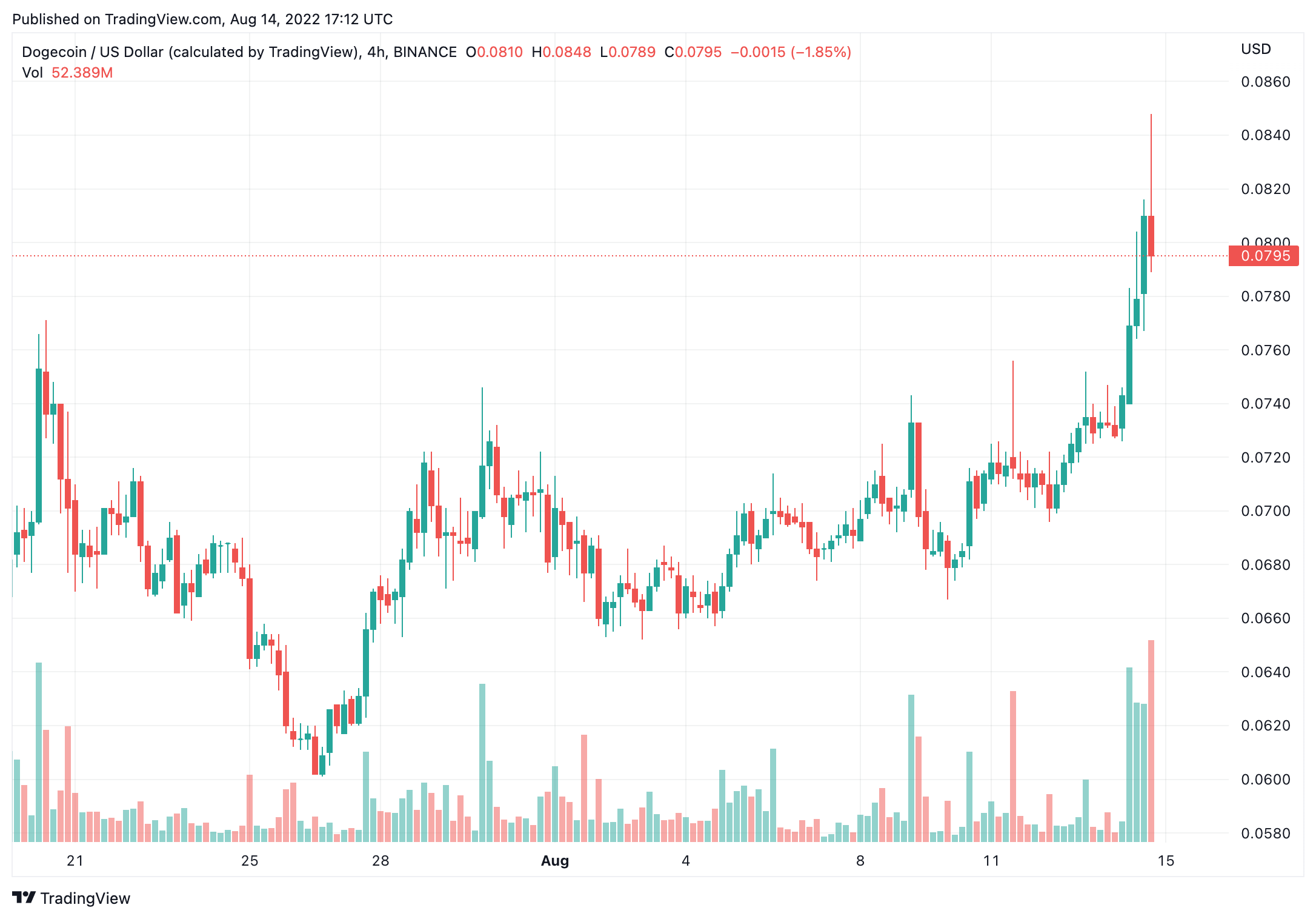 Both Shiba Inu and Dogecoin were on the verge of a breakout or at least a volatility spike in either direction as they have been showing an extremely anemic performance in the last 30 days of trading. On August 14, DOGE successfully broke through the symmetrical triangle that acted as a consolidation range for the coin that has not shown us a proper price performance in the last few months.

In mid- or long-term time frames, there are no resistances that might hold Dogecoin from moving further up unless the rally fades due to the lack of trading volume, which remains on a relatively low level compared to bull market values. Dogecoin’s biggest rival With Shiba Inu dropping on the market, we saw a split in the memecoin industry, as some preferred the old classic and others chose the exposure to extremely volatile and risky SHIB tokens.

Today, the volatility of the token dropped to an average level that exceeds Dogecoin. In the last 24 hours, Shiba Inu gained more than 22% of its value, becoming one of the best-performing assets on the cryptocurrency market. The main question for investors now is, how long will this rally hold, as we are not yet seeing a spike in the trading volume or market inflows and a reversal is more than possible once the weekend trading session is over?

Dogecoin Foundation director, Timothy Stebbing, reckons that the newly released libdogecoin might open up a brand-new chapter for the Dogecoin ecosystem. Stebbing reacted to DOGE developer Shafil Alam, who made it known that he had successfully compiled libdogecoin for both Android and iOS devices. Stebbing commented that this “demonstrates the power of libdogecoin to bring Dogecoin developments to new realms … so many ways to build new doge apps brewing.”

Libdogecoin v0.1, a C library of Dogecoin building blocks that enables direct lightweight integration of Dogecoin into a variety of platforms without the need for developers to have in-depth blockchain knowledge, was just released, according to an announcement made by core developer Michi Lumin earlier in August. Libdogecoin would allow anyone to easily design a product that complies with the Dogecoin standard as it is a pure library, without the ability to “run” a node.

The adoption that follows integration highlights Dogecoin Foundation’s primary utility-focused approach. This is believed to be feasible by aiding the community’s ability for innovation by making Dogecoin’s core functionality available as a straightforward C library with bindings for several languages. Libdogecoin also serves as the foundation for projects such as RadioDoge and GigaWallet that aim to bring the Dogecoin ecosystem to a ready state for rapid grassroots adoption.

After a faltering first half of 2022, Shiba Inu (SHIB) showed signs of recovery that began in July

Bitcoin price flirted with $25,000 while Ethereum broke through $2,000 before both lost steam