Dogecoin emerges among the top rewarding projects for miners, exceeding Bitcoin SV and even Bitcoin Cash

Few think that the original Dogecoin cryptocurrency was just a joke on social networks. But so far, DOGE has been considered one of the top rewarding projects for miners, surpassing both Bitcoin SV and even Bitcoin Cash.

Dogecoin emerges among the top rewarding projects for miners

Dogecoin is the self-styled meme currency used by Shiba Inu dogs. This cryptocurrency was founded in 2013, but quickly caught over Reddit and 4chan and reached a market cap of $ 60 million in 2014. But used use is still prominent if mining fee data is anything to go by.

Elsewhere, according to analysis from Messari, Bitcoin and Ethereum analytics companies are collecting over 99% of all fees generated by the vast cryptocurrency mining ecosystem. However; high fees do not mean the Blockchain network will become active because Bitcoin and ETH can bring profits for miners. But there is no benefit to end-users – those who can choose cheaper alternatives for transactions. And obviously, Bitcoin and ETH alternatives would be DOGE.

More than 99% of all blockchain fees are paid to Bitcoin and Ethereum miners.

Outside Bitcoin and Ethereum virtually every blockchain is free to use. pic.twitter.com/7uFXiKs9bb

You can see the Messari chart of cryptocurrency fees, displays revenues of less than $ 100: 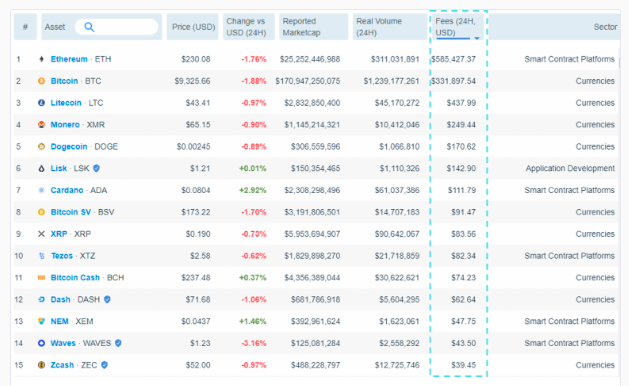 In addition to DOGE, cryptocurrencies like Bitcoin Cash and Zcash are almost free to use, with a fee of less than a penny since the beginning of 2019. This can make them more attractive to “Nocoiner” users in both developed and emerging economies, which are not likely to pay upwards of a dollar on each transaction.

Meanwhile, transaction fees on Bitcoin dropped below $ 1 last week. The data was last seen in January 2020 and for the first time since the Bitcoin Halving event on May 12 of Bitcoin.

Almost 120,000 Ethereum wallets that hold >32 $ETH are ready for staking. This number has grown by 13% over the past year

Meanwhile, Ethereum’s GAS network is reaching an all-time high. The increased activity of stablecoins and DeFi can be attributed to increased GAS usage. Last week, Tether transfers on the Ethereum blockchain (USDT released on five other protocols) were growing significantly.

What is Origin Protocol (OGN)?