Debit cards of Crypto.com and TenX customers been frozen for use in the UK and Europe because of Wirecard scandal

According to official information from Crypto.com, they will reimburse customers when the UK regulator asks Wirecard’s card issuer to stop all operations immediately. Not only Crypto.com, but even TenX customers can no longer use their crypto debit cards. 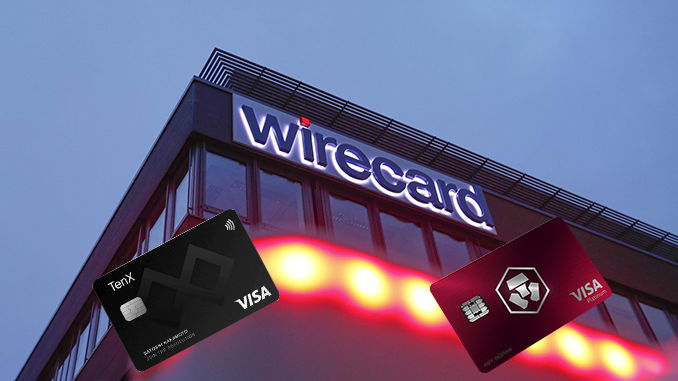 The UK and European customers of Crypto.com and TenX can not use their crypto debit cards

“We’re refunding 100% of customer funds after the Financial Conduct Authority (FCA) suspended the activities of Wirecard Card Solutions. We will rapidly proceed to credit the funds back to our users’ crypto wallets.”

Wirecard Card Solutions us a subsidiary of the Wirecard Group, which filed for insolvency on Thursday after admitting last week to be missing $ 2.1 billion. Reportedly, all money will be refunded in the next 48 hours. However, users will not be able to top up or transact with a Crypto.com card today.

Why are Crypto.com and TenX insolvent, is that because of Wirecard?

The abrupt freeze occurred because the company that powers them, Wirecard, filed for insolvency today over allegations that it lied to auditors over $ 2.1 billion of its funds. Its auditors, Ernst & Young, failed to ask for the records for three years.

Meanwhile, Germany’s Wirecard officially announced bankruptcy on June 25 after admitting the debt of up to $ 4 billion, was discovered by EY auditing firm to show signs of “serious mistake.” The case caused Wirecard to file for bankruptcy in a court in Munich (Germany).

Both Crypto.com and TenX remained silent after Wirecard acknowledged the $ 2.1 billion accounting flaw that came from employees who deliberately increased the company’s revenue. Both companies made sure their customers were safe because a separate financial institution held them, but the representative declined to say whether they were looking for another card issuer.

In a statement, Crypto.com said it was in the process of moving its card program to a new provider. TenX has remained silent so far.

According to Reuters, aftermarket valuation of up to $ 28 billion two years ago, Wirecard became the first company to be listed on the prestigious German stock exchange DAX. The incident caused German and European financial markets to be shaken.