DCG bought CoinDesk in 2016 for $500,000 but it may be forced to sell the crypto publication and file for bankruptcy

The situation for Digital Currency Group is getting worse (DCG). It might be compelled to sell its cryptocurrency publication CoinDesk, according to sources.

CNBC revealed on January 18 that CoinDesk had hired investment bank Lazard. The Digital Currency Group owns the store, is thinking about selling the company wholly or partly.

In an emailed statement, CEO Kevin Worth said, “over the last few months, we have received numerous inbound indications of interest in CoinDesk.” The site was founded in 2013, and it broke the initial report about FTX’s issues and its questionable balance sheet. Furthermore, the WSJ reports that DCG paid $500,000 to purchase the media company in 2016.

Barry Silbert’s Digital Currency Group has faced many issues due to the eventual collapse of the Sam Bankman-Fried cryptocurrency business. Additionally, Grayscale, a digital asset manager, is the corporation’s subsidiary.

The media company will be helped by financial advice and asset management firm Lazard looking into “various options to attract growth capital to the CoinDesk business, which may include a partial or full sale.” After FTX failed, DCG’s issues grew worse. Due to its exposure to hazardous loans, its crypto lending company Genesis is on the verge of bankruptcy. Gemini, a cryptocurrency exchange, had $900 million in user assets locked with their yield partner Genesis before this happened.

CEO Barry Silbert stated in a letter to shareholders earlier this month that DCG owes Genesis Capital $447.5 million and 4,550 BTC. May 2023 marks the loan’s due date. Additionally, Grayscale’s Bitcoin Trust is owned by DCG (GBTC). Since March 2021, the company is said to have spent $722 million on GBTC purchases. The trust is currently being offered for sale at a -40% discount to its net asset value.

DCG informed shareholders in a letter dated January 18 that company was stopping its quarterly dividend payments in order to save money. In addition, the corporation laid off workers and shut down its wealth management division earlier this month. 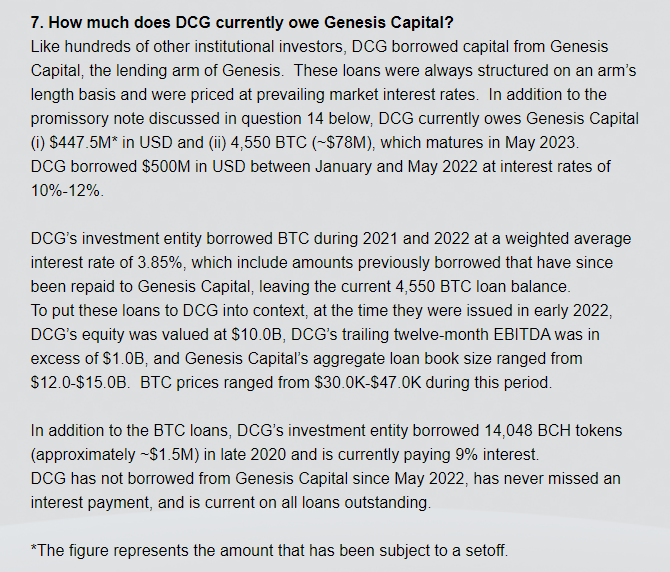 With a 3.9% drop in total market capitalization, the cryptocurrency markets are currently in decline. The amount has again dropped below $1 trillion due to this. As a result, all of the majors are losing money at the time of writing. Bitcoin fell to $20,710 after losing 2.5% on the day. Ethereum, currently priced at $1,519, decreased by 3.8% during the last day.