Recently, Bitcoin or Ethereum transaction fees are skyrocketing to five times the reasonable amount, causing payment delays and raising the price of currency exchange between exchanges. During this time, an analysis from Xpring shows that users are gradually switching to XRP. 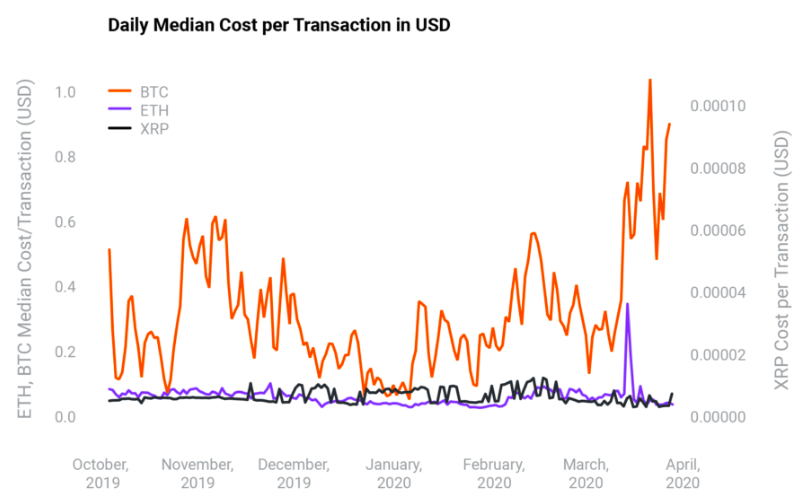 One of the reasons users believe in XRP comes from its reasonable transaction fees and reliability (backed by the Ripple company).

Moreover, with its unique consensus authentication architecture, payment transfers are almost instant. This gives market makers and traders a high-speed way to transfer money from the exchange to exchange. The speed of XRP not only allows it to capture many of the price differences between exchanges but also dramatically reduces the risks associated with such price difference transactions.

A few of the 130 exchanges listed on XRP have recorded multiple use cases of global payment Ripple. From North America to Asia, they have listed XRP as a base currency, to be paired with fiat currencies and other digital assets in trading.

In a recent post, Bitrue CEO Curis Wang stated about the reasons why his company decided to move to XRP.

“XRP’s use case makes it both practical and scalable, so it made sense for our business to focus on it. As more people turn to RippleNet’s On-Demand Liquidity service for faster, cheaper global payments, Bitrue will grow alongside the increasing use of XRP. We took a chance on centering our platform around the asset and are now benefiting from being a fully integrated part of the XRP community.”

While some exchanges have started to issue their tokens as base currencies, they don’t allow for fluid trading between exchanges, and they increase risk by encouraging capital pooling. Instead, when independent cryptocurrencies like XRP are used as the base currency, these challenges will disappear.

Josh Williams, CEO of the Ripple-funded blockchain gaming company Forte, said developers today only act as merchants, selling one-way goods to players for real money. However, with Forte technology, ownership of digital goods and currencies can be stored on the blockchain, giving players decentralized control over their in-game assets. This offers players real cash incentives to get in-game content that they are likely to sell later for a profit.

He said developers could find themselves holding a real-world game economy, thus gaining some potential new revenue streams. Developers can set up a fiscal policy and tax player transactions, and they can also store several in-game asset reserves for sale if the economy takes off.

“If you step back and put all these pieces together, I create a market economy inside of games, instead of a command and control economy or just a pure merchant economy, which is the case in games today. And market economies are how the world works today, and the world’s economy is much bigger today than it was in the past. The same thing will happen in games.”

“There are games like Fortnite today that have hundreds of millions of players that play them every single month. And those games are wildly successful – the most successful games that have ever been created are being created today.

In early 2019, Xpring and Forte’s Ripple investment arm formed a $ 100 million fund to bring blockchain gaming to the mainstream. The goal of the fund is to integrate blockchain and XRP technology into existing games with more than 50,000 daily active users.

The Ethereum Foundation has postponed Devcon VI until 2021 and will host it in Bogota, Colombia