Utah State Representative Mike Winder has had his account compromised to promote a cryptocurrency scam. 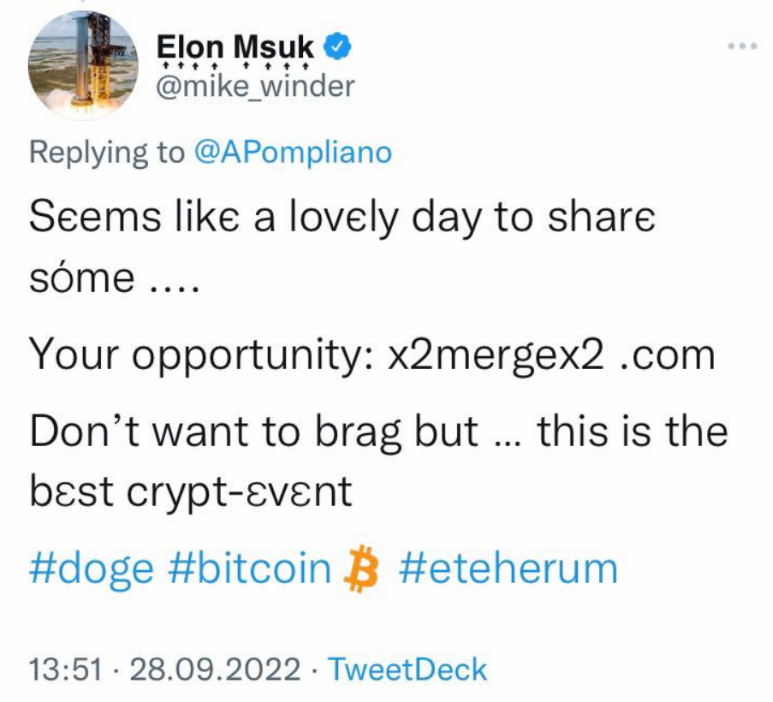 The account’s name has been changed to that of Tesla CEO Elon Musk, with fraudsters promoting “the best crypto event.” To be precise, the scammers misspelled the centibillionaire’s name as “Msuk” in an apparent attempt to avoid detection by the social media’s anti-bot mechanisms.

Scammers have been spamming identical messages in the replies of various popular cryptocurrency accounts, including famous digital artist Mike Winkelmann (better known as Beeple) and the Binance exchange.

Musk’s criticism of Twitter’s alleged inability to deal with an influx of spam is at the crux of the ongoing legal battle between Musk and the social media giant. The Tesla boss decided to back out of the controversial acquisition deal, accusing the company of hiding the real number of bots.

The last tweet by Winder about “gorgeous autumn” in Millcreek, Utah, was published on Sept. 23. Over the last few hours, the compromised account of the Republican politician has been churning out tweets about the controversial event. Notably, its tweet uses some characters from other languages, which makes them instantly suspicious.

Scammers are typically hunting for verified accounts to seize control over them and promote their shams with a certain veneer of legitimacy. Scammers recently started impersonating Cardano founder Charles Hoskinson with the hacked account of “How I Met Your Mother” star, Will Sasso.