Crypto price analysis 8/4: Bitcoin will soon reach $ 12,000 based on this pattern plus XRP, XTZ, LINK

Bitcoin is showing all signs of further price increases but the macro market can still make the bull run, said Glassnode. In its latest weekly update, The Week On-Chain, the company has sounded a warning bell about an outside force that has halted this rally.

We have now advanced into Bitcoin with the worst historical performance. On average, King Coin crashed 14% in August.

BTC price action appears to be declining in a bullish reversal pattern that shows a spike to $ 12,000. And this could happen soon. The model in question formed from whale manipulation is designed to eliminate weak hands, before price quickly returns to their previous highs.

Looking at a fractal on the BTC / USD chart for the following 2 hours from last year, May 2019, we can see a strong reversal pattern has some obvious characteristics.

1. A sharp decline, which retreated about 50% before closing.
2. After that, a brief period of low volatility pushes price action sideways.
3. Fluctuating sideways creates a lower low, followed by a higher low.
4. The pattern is then completed by completely retreating to a high level before the first sharp decline. 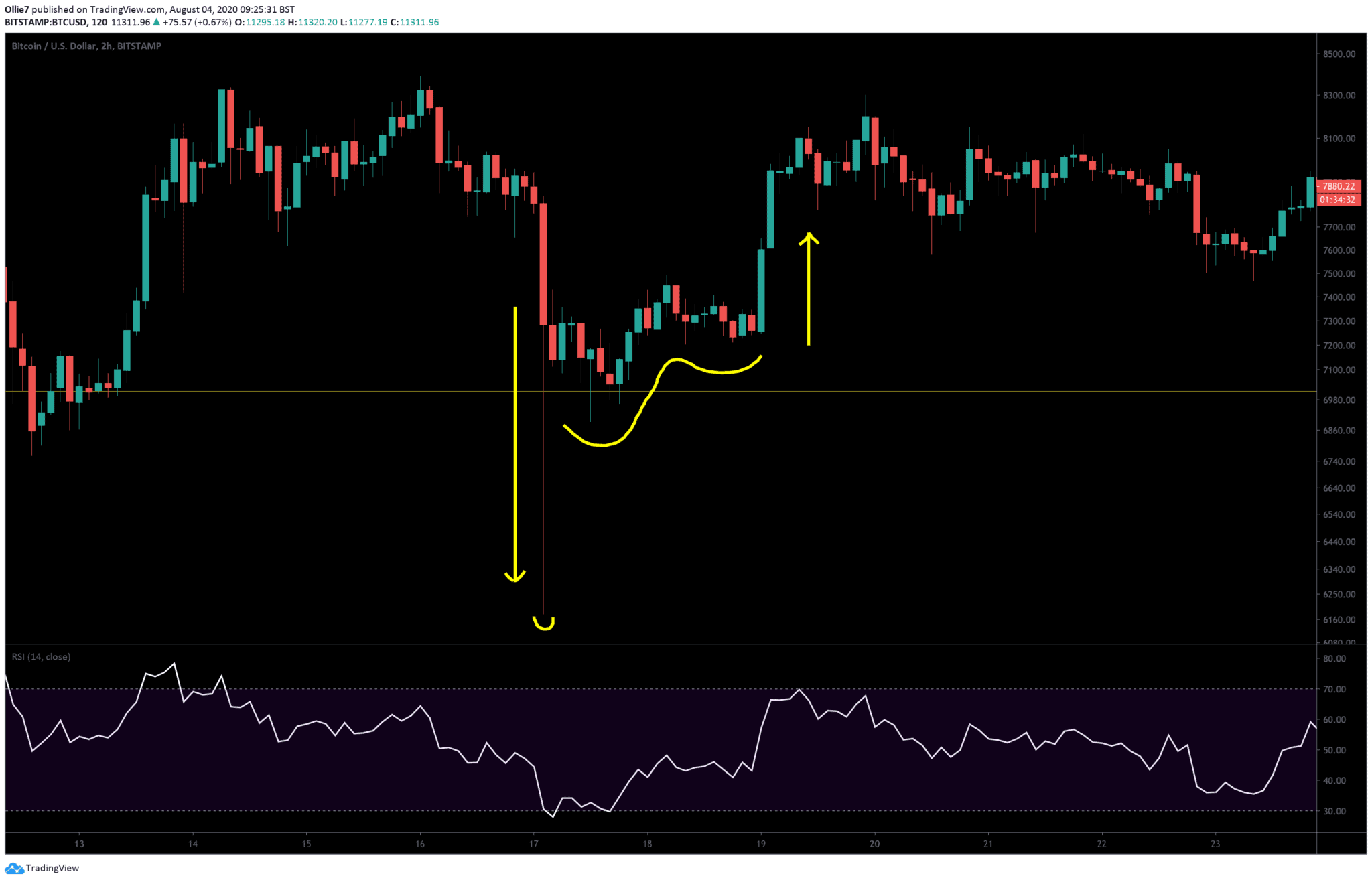 This may be the result of a big whale dumping the price to trigger a stop-loss and cause panic in the market. This panic led to an increase in selling pressure, providing whales with enough liquidity to buy back BTC at a much better price than before.

It is a simple tactic and almost always works. This is mainly because inexperienced traders tend to trade emotionally and follow the market. 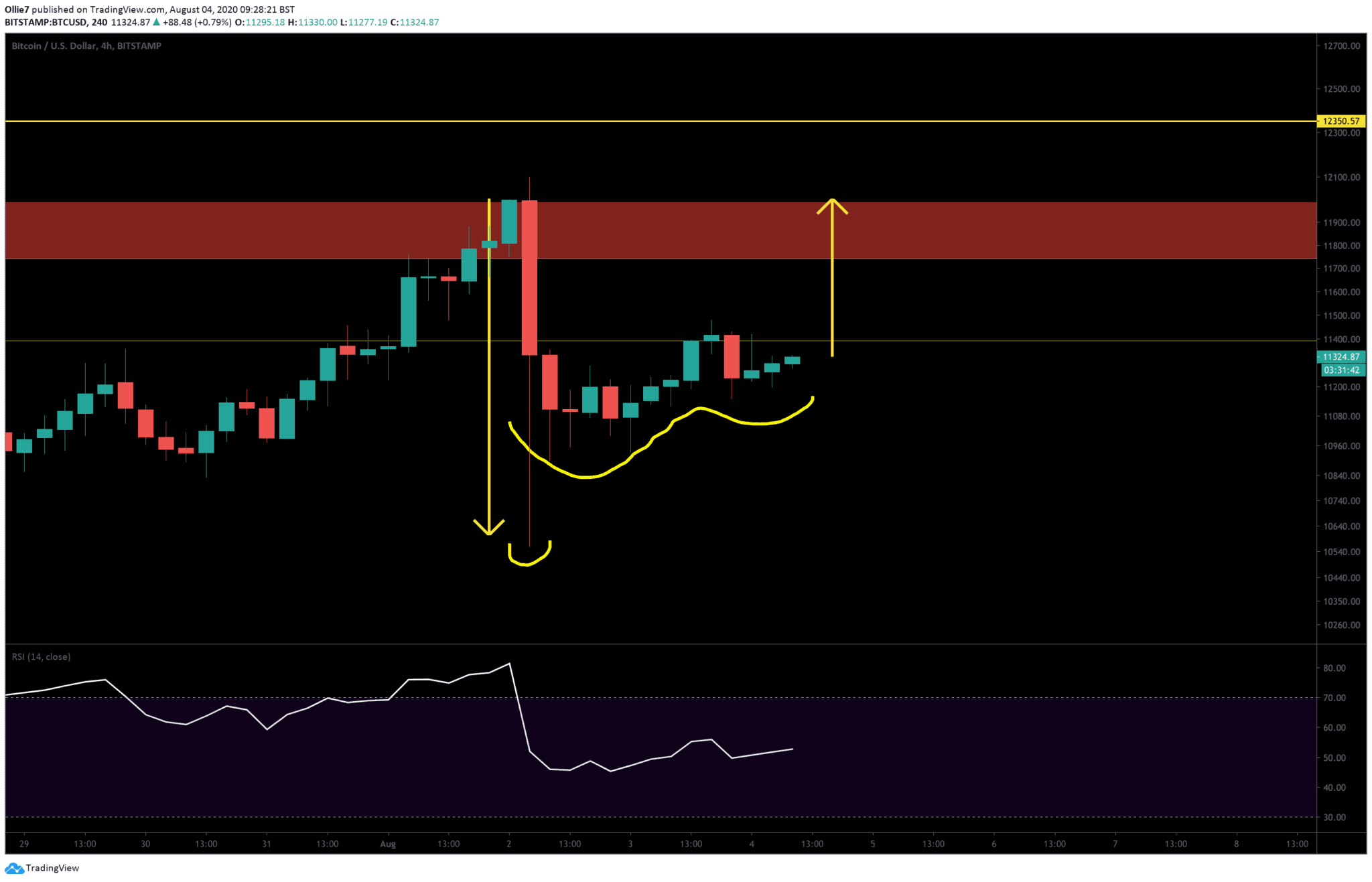 1. We have had a sharp decline, which retreated by about 50% at the close.
2. The price pushed aside and printed a lower low, followed by a higher low.

If the pattern is taking place and the price of BTC returns to $ 12,000, we should expect some pullback and perhaps a period of sideways action, before the bulls break out of the next resistance.

After $ 12,000, the next likely hurdle barrier will be the daily strong resistance at $ 12,350. If the price exceeds this point, Bitcoin will set a new yearly record.

If the pattern is rejected and the price breaks, the 50 EMA will be the first place for traders to recover. Below this level, $ 10,800 can also provide some intraday support. If that fails, then we have another support at $ 10,280.

After correcting the short-term downside, XRP has started to rise above $ 0.3. The price is following an upward path and it has stabilized above $ 0.305, plus 100 SMA (4 hours). 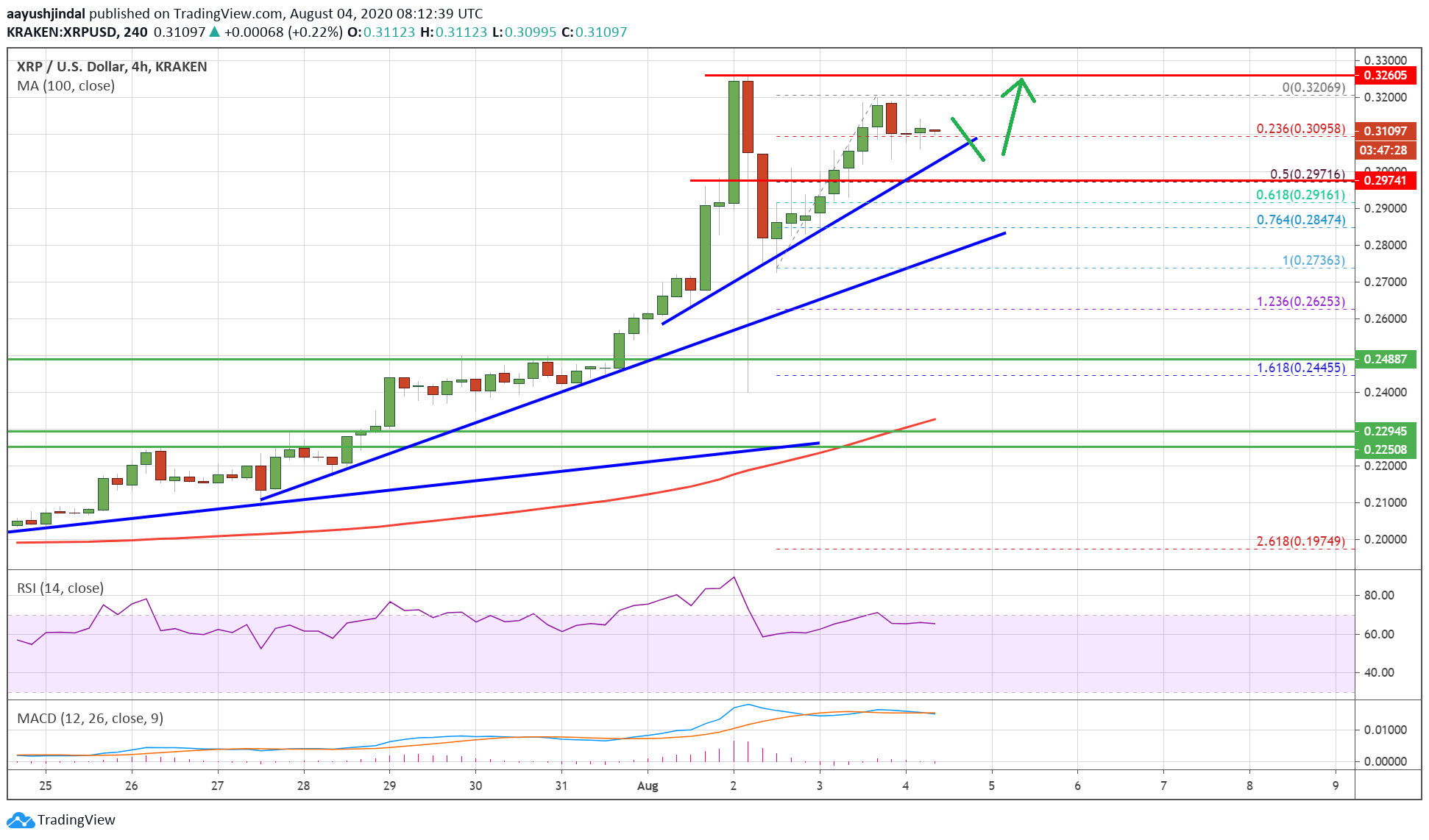 On the upside, there is a strong resistance near the $ 0.32 level. A successful close above the $ 0.32 resistance level could open the door for opportunities to earn more than $ 0.322. The next major resistance is near the $ 0.325 level, above which the price is likely to reach new monthly highs.

Tezos has seen some strong price action in recent weeks, with its price facing some tough deals over the past few days.

This weekend, XTZ peaked at a high of $ 3.15 before facing a strong sell-off with Bitcoin and the rest of the market.

In the end, it dropped to a low of $ 2.80 before finding some important support, and it has been fluctuating between lows and highs of $ 3.10 since then.

On the technical perspective, analyst “Michaël van de Poppe” noted that its strong support at the lower level of this range has led to a influx of buyers currently entering.

“XTZ: Still nicely consolidating inside a range. Green zone holding as support and buyers are eager to step in there. Crucial resistance zone is the $3.15-3.18 area. A breakthrough of that level = test of $3.60-3.90.”

The data shows that the open interest for cryptocurrency on Bitfinex has skyrocketed to new all-time highs. Interestingly, 93% of this open interest includes long positions.

According to analyst “Josh Olszewicz”, this is XTZ’s historical high and shows that some big traders are expecting it to see a big price increase in the short term. 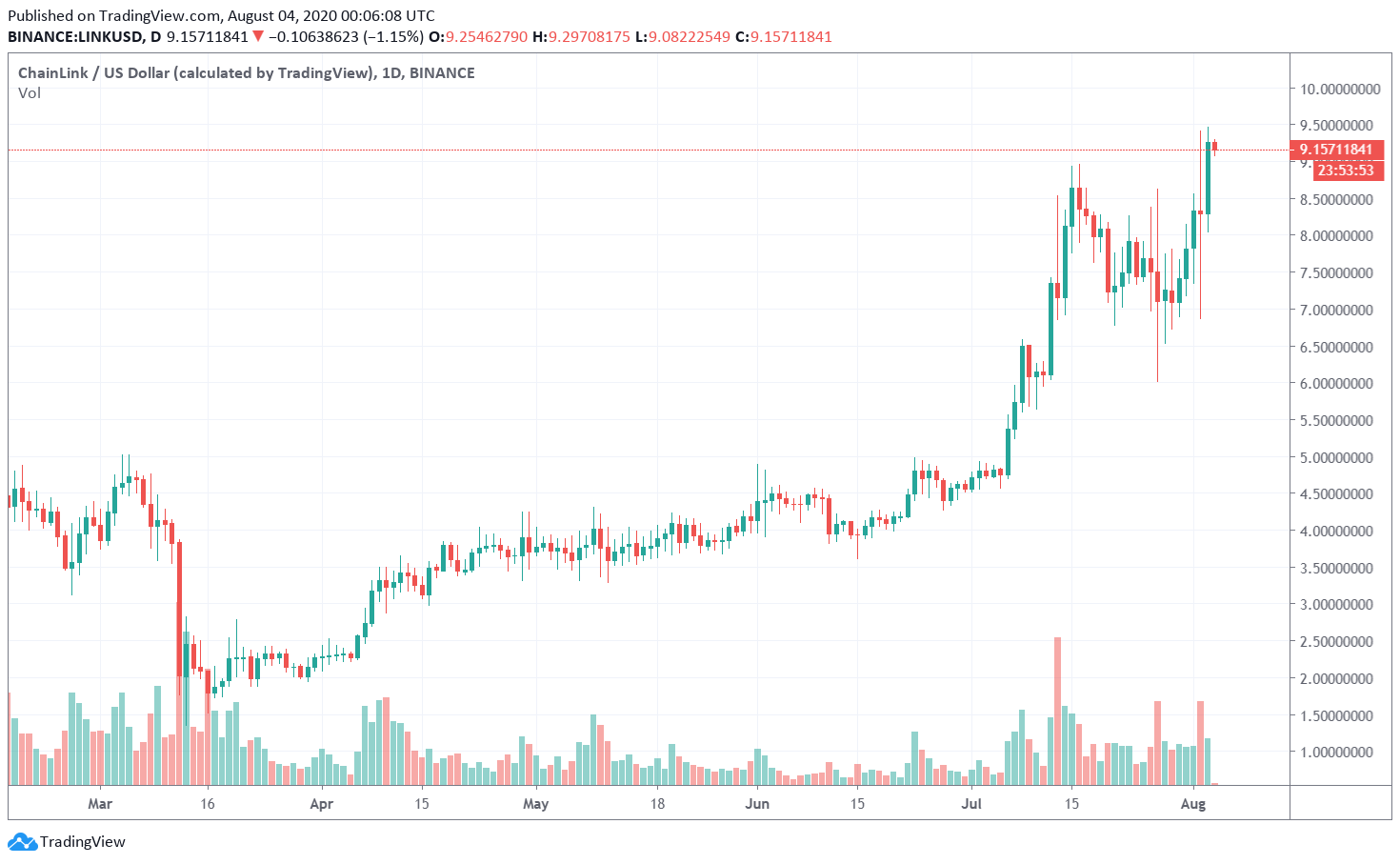 This increase comes after LINK suffered a strong retreat after reaching $ 8.94 in mid-July. Like many other leading altcoins, LINK is subject to fluctuations in the prices of Bitcoin and Ethereum.

Since LINK started the year at $ 1.76, this means LINK has grown an impressive 445.45% YTD against the USD. Interestingly, the most recent rally rally of altcoin began around the same time that both Bitcoin and Ether had a flash crash on Sunday (August 2).

Santiment has noticed that as the price of LINK has increased recently, transactions and social volumes have increased. 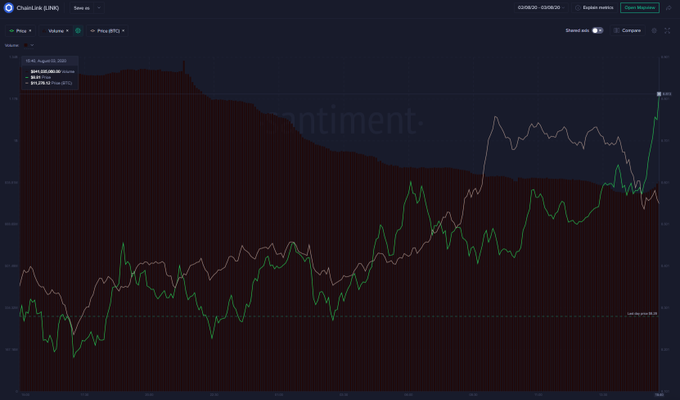 Analyst Josh Rager is confident that Chainlink could soon break $ 10 to set up another new ATH.

Chainlink price uptrend to end anytime soon either and could be poised to surge up towards $11.5 in the coming days