Bitcoin’s rally above the $ 10,000 – $ 10,400 area has attracted some traders who are waiting for a trend move to begin. Yusuke Otsuka, the co-founder of Japanese crypto exchange Coincheck, said that a number of inactive Japanese traders started trading again this week.

Monex Group CEO Oki Matsumoto also said that many traders have missed buying gold at lower levels of interest in Bitcoin because it has just begun an uptrend.

However, it should be noted that traders have different goals, and they trade different time frames. After a sharp move in the past few days, some short-term traders have hit the sell button when Bitcoin tops the $ 12,000 mark.

The next few days are very important as they will provide more insight into whether Bitcoin has started a sustained growth move, or is this a giant bull trap.

A successful close above $ 11,500 is likely to push prices back to the upside. In the case mentioned, the price is likely to rebound to the $ 12,000 resistance level.

ETH and the entire cryptocurrency market are currently trying to stabilize after unprecedented volatility witnessed overnight.

Both have recovered slightly, but they are still in precarious positions.

As for ETH, an analyst is currently noticing that he is expecting it to see further downside in the coming days and weeks.

According to the chart, the ETHBTC price he is trying to accumulate exists at around 0.026 BTC while it is currently trading at 0.034 BTC.

Another analyst explained that he now believes that ETH can pull back a bit against the USD before finding any meaningful support. 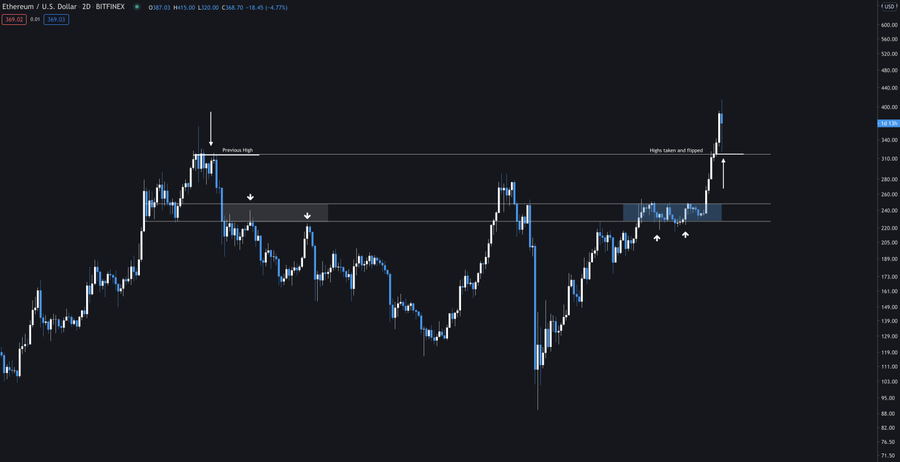 As seen in the chart above, the area below $ 300 is historically important for Ethereum, and the overnight decline here further confirms this.

Over the past week, XRP has surged sharply above $ 0.3, following the rally of Bitcoin and ETH. The price even rose above the resistance of $ 0.312 and stabilized above 100 SMA (4 hours).

Price is currently testing the Fib 61.8% retracement of the recent breakdown from the $0.3255 high to $0.24 low. On the upside, there is a strong resistance near the $ 0.3 level. A successful close above the $ 0.3 resistance can open up opportunities for greater profits.

Cardano (ADA) is currently in 8th place, with a market capitalization of 3.5 billion USD.
At $ 0.1136, ADA is stuck in sideways trading with no proper destination insight. 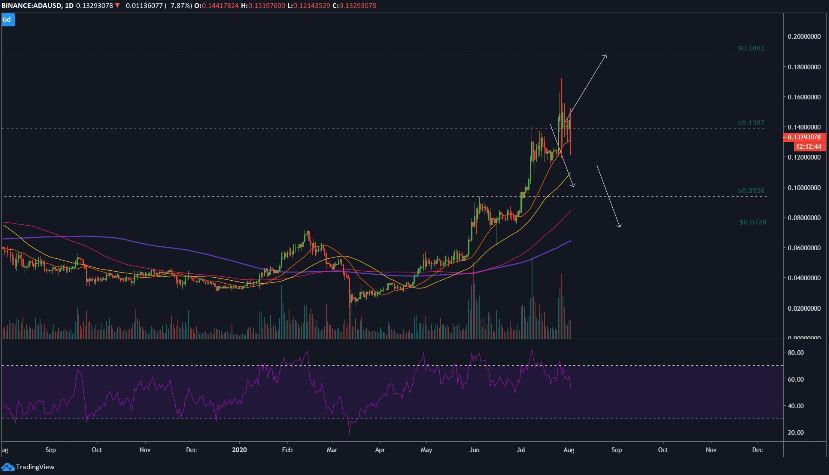 The price can move in 3 directions: up, down, or sideways. However, whichever direction is used depends primarily on Bitcoin because Bitcoin dominates the market.

Considering the flash crash of Bitcoin yesterday, there will be a more in-depth retreat, and a close above $ 11,500 will be extremely up. Therefore, if Bitcoin rises higher, the ADA will undoubtedly move higher. However, with the situation going on right now, if the ADA fails to close above $ 0.1387 and test it as a support, it looks like the price will drop to $ 0.0936 after testing the intermediate support at $ 0.1207.

Looking at the RSI, it recently tested the overbought area and is heading lower; therefore, it is likely to decline more. To confirm the decline, the price on the daily time frame must close below the 21-DMA (orange) at 0.1311, and a close below the intermediate support of $ 0.1207 will be a great condition to open a short position.

Also, the weekly chart looks bad because the price seems to face a decline at Fib 0.5 (coinciding with $ 0.1551). The RSI on the weekly time frame has blown out the overbought area and is likely to reverse to the average value. Therefore, a short position for ADA seems to be more favorable.