Bitcoin’s price has been ranging from $ 8,600 to $ 10,500 since the halving. During two months of operation, the market started to heat up, and altcoins entered the spotlight.

In addition, traders and investors are constantly arguing over whether the price of BTC is still in the rising or falling territory. Let’s take a closer look at the charts where Bitcoin might be next.

Many analysts expressed bearish sentiment when looking at the recent price action of Bitcoin.

They mostly cite the ongoing downtrend, which began when BTC price was rejected at $ 10,400 in early June. Bitcoin printed a series of lower highs and lower lows, a trend that has no end. 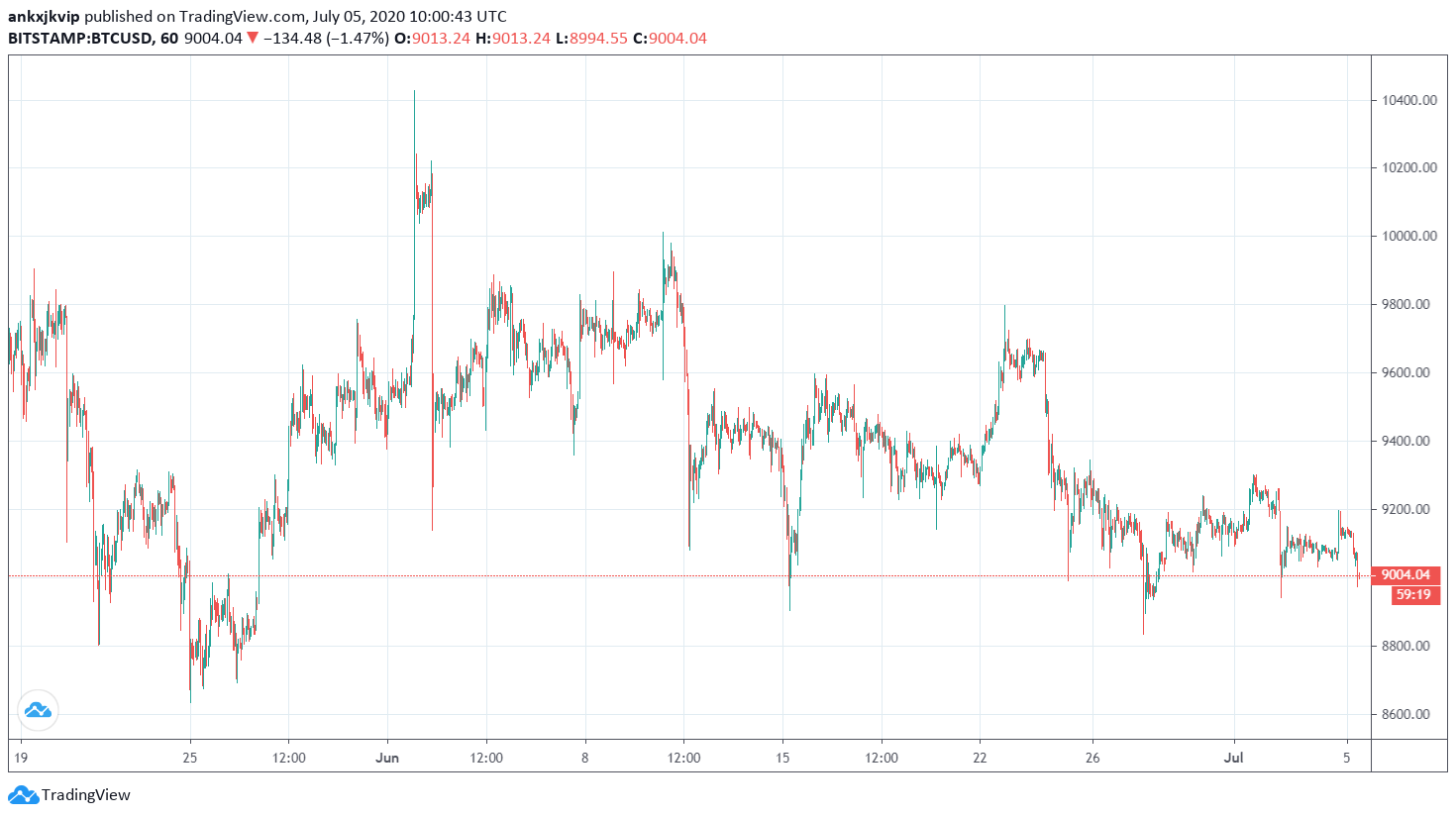 When looking at market volume, Bitcoin’s medium-term outlook is not much better. The volume trend also implies that the cryptocurrency market is in a downtrend.

“A couple more clues developing that lend themselves to HTF distribution. 1. Rising Demand on the verge of failing. 2. Side by side, ascent vs. descent with selling the dominant pressure from volume. We break to the downside; I’m not interested in $7ks.”

However, there is a historical fractal that shows that BTC’s decline at $ 10,500 and is in a downtrend does not mean that it has a downtrend.

Analyst ‘Giraffingaround’ shared the two charts below on July 3, one being Bitcoin’s recent price action, the other being Apple’s stock price from a period many years ago. We can see Apple over this historical time frame, and BTC now looks similar.

Both have strong rallies on a range, a failed breakout, and then a retreat to the lows.

In the case of Apple’s history, the asset has risen after retreating to a low level.
In the case of Bitcoin, it has dropped to lows. 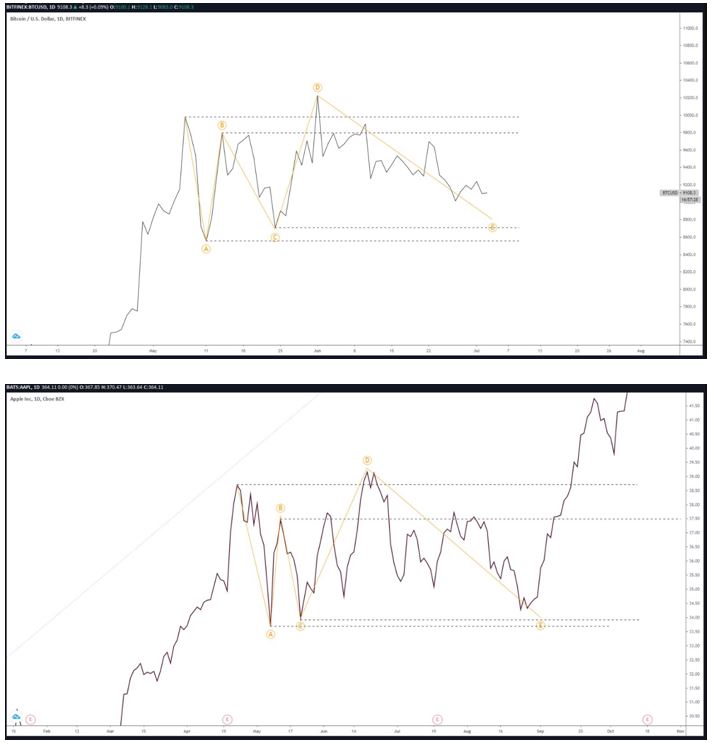 The analyst mentioned above is not the only one who shows that the ongoing scope of Bitcoin actually increases, despite the sentiment of the majority.

Analyst ‘Ethereum Jack’, who predicted Bitcoin would see a V-shaped reversal in March, shared the chart below two weeks ago. Like the chart above, it implies that Bitcoin will surpass the ongoing consolidation up to $ 10,000 and above. 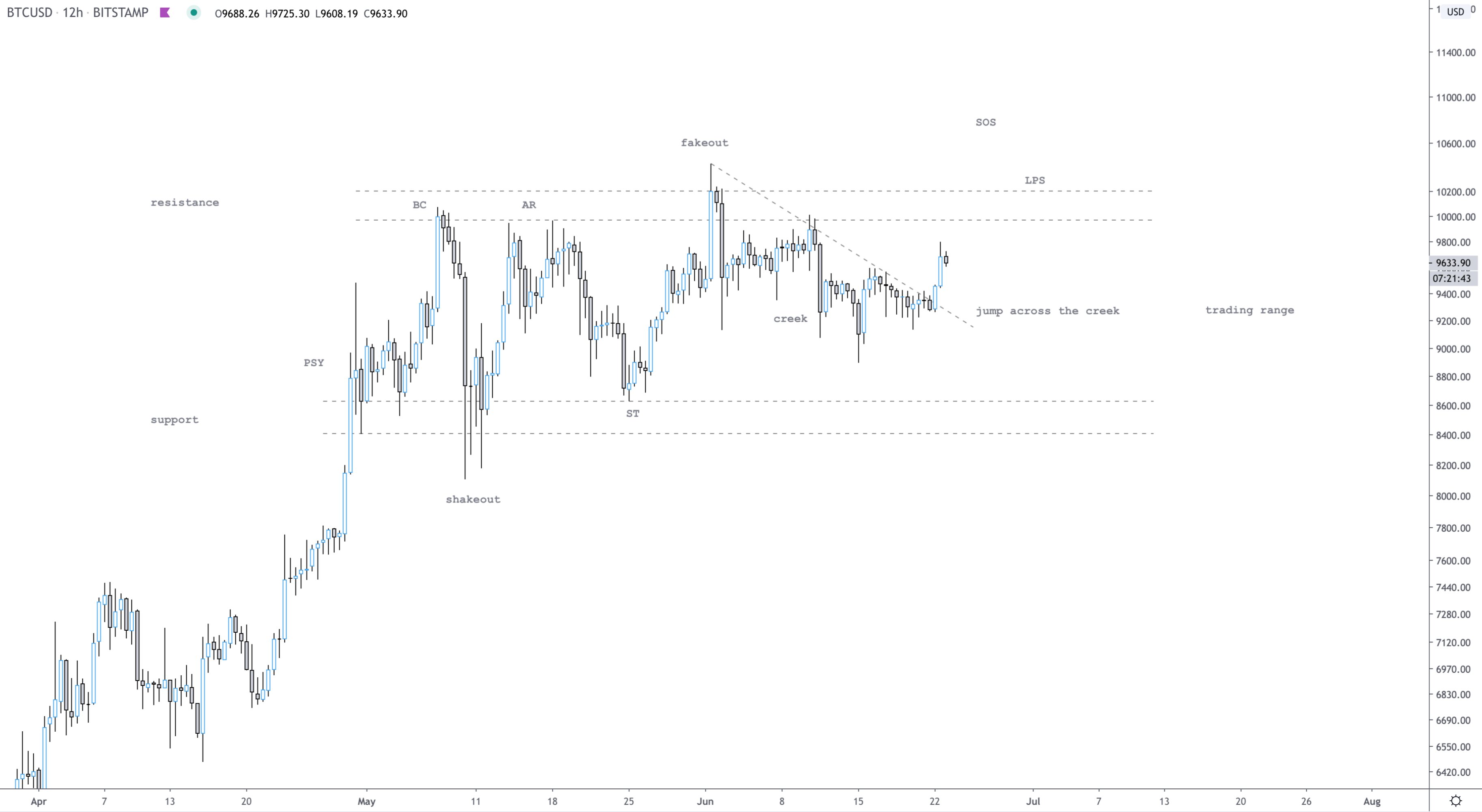 The upward move is limited by the $ 232 resistance. It represents the Fib 50% retracement of the move down from the $250 high to $215 low. The price is currently trading above the support of $ 225, but it is struggling to gain momentum above 100 SMA (4 hours).

Recently, there was a break above an important downtrend line with resistance near $ 225 on the 4-hour chart of ETH / USD. This is a positive sign, but the bulls still need to push the price above 100 SMA and $ 230.

If the bulls close above $ 230 and $ 232 successfully, the price could start to rally sharply in the coming sessions. The next target for the bulls could be $ 250.

XRP has been struggling to avoid the strong selling pressure it has faced since the end of February, with its buyers unable to spark any kind of noticeable recovery from the mid-March lows.

This weakness has made XRP perform worse than Bitcoin and many of its peers. It first started in early June when the token was trading above $ 0.21. From here, its price slowly declines until some support is found at $ 0.18. There are currently no technical or fundamental catalysts to help change this trend.

This support is currently in the process of being broken by the sellers. 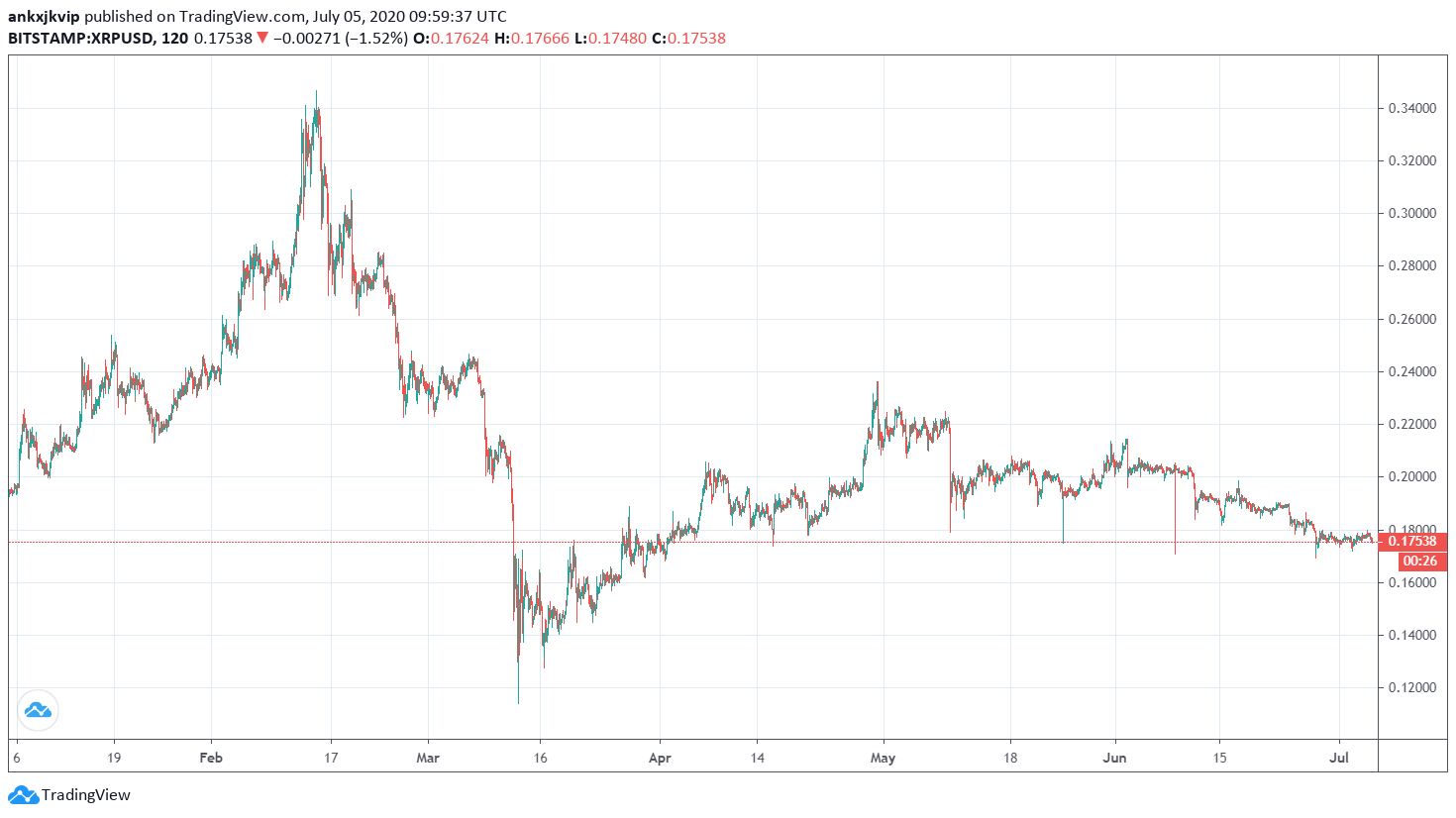 From a purely technical perspective, XRP does not show any signs of forming any kind of long-term bottom.

Analyst Luke Martin recently raised a question about where the cryptocurrency could bottom out, noting that it has been falling to 2020.

This has been a significant price in history, as it is where the XRP parabolic rally began in 2017.

It seems that XRP’s technical weakness is a result of its reduced base strength.

Ripple’s On-Demand Liquidity (ODL) product – using the cryptocurrency and has long been considered a utility for it – has not been able to onboard any notable new partners recently.

In addition, the trading volume of XRP has stalled, even started to decline slightly. This has dealt a blow to the medium-term prospects of the cryptocurrency, prompting many investors to jump ship as analysts set comparatively low prices. 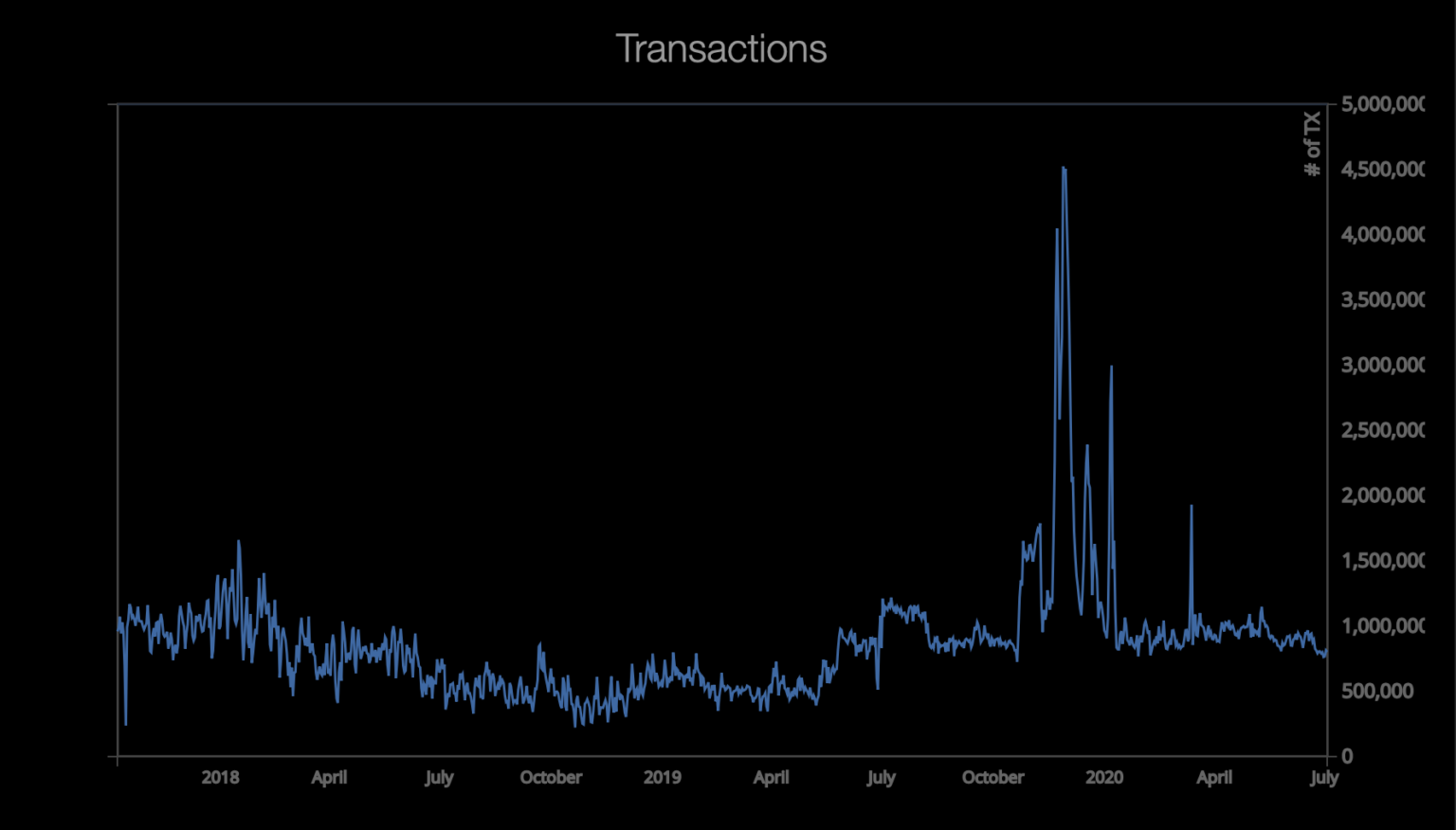 This seems to indicate that XRP is not being used as much and could cause confusion for its macro outlook.

Recently, the cryptocurrency market has been unable to make an uptrend, with most major cryptocurrencies consolidating in the past few weeks. However, such price fluctuations do not necessarily paint a bearish picture for many major crypto assets.
Litecoin is a case in point.

The price of Litecoin has plummeted in the past month, probably because there are no new updates from the Litecoin Foundation, other than the announcement of the release of Litecoin Core 0.18.1.

LTC is currently trading as low as $ 41.4, with resistances near $ 42, $ 44, and $ 47, according to its historical movement. However, the weakening is making way for a bullish pattern that is waiting for a breakout, at press time. 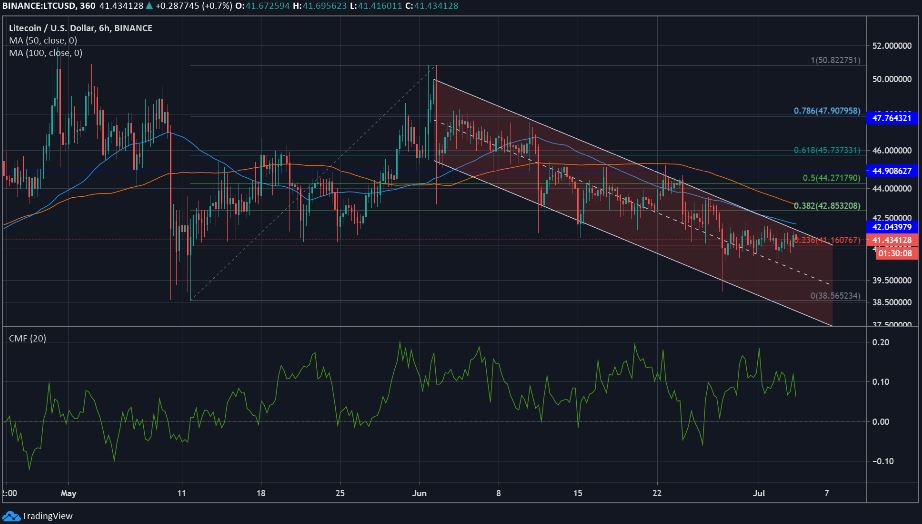 According to LTC’s 6-hour chart, price began trending downward as soon as June began, in parallel with the correction established in the market. Since then, LTC has been unable to hold the $ 45 mark, falling to the $ 41 zone, close to the support provided by Fib 0.236. However, the price bounced back at this level and may not fall below $ 41, as it has been an important support for the past few days. Conversely, if the selling pressure increases, the coin can fall to $ 38.

If the price breaks out of this pattern, it can spike above $ 42, a stiff resistance. If successful, the price could rise to $ 44.27.