Central banks around the world are constantly pumping more stimulus into the economy. For example, the European Union (EU) leaders recently approved a budget of $ 2.1 trillion, the Bank of England has stepped up stimulation in mid-June and the US Federal Reserve (Fed) announced on Wednesday that it would continue lending until the end of the year.

Meanwhile, the US GDP in the second quarter decreased by 32.9% over the same period, the lowest reduction since 1947, nearly four times the worst quarter during the financial crisis, according to data released by the US Department of Commerce. This is the largest decline in the US economy since the government began reporting records in 1947.

An assessment of Bitcoin has proven to be highly correlated with traditional markets,
It will take hours or days when both markets digest the news of the downturn in the US economy.

After a sharp rally, the Bitcoin price began consolidating below the resistance of $ 11,250. BTC has corrected a few times lower, but it is still trading above the support of $ 10,700.

However, the price appears to be struggling to settle above the $ 11,200 and $ 11,250 resistance levels. There is also a major contract triangle formed with resistance near $ 11,240 on the hourly chart of the BTC / USD pair.

Recently, ETH has encountered a solid uptrend, showing that the medium-term prospect of Ethereum is bright.

Analyst “Josh Rager ‘recently explained that a close above $ 320 could catalyze ETH up to $ 400.

Analyst “Cactus” is targeting $ 500 for ETH before the end of the year.

He came up with a chart that shows a break above the key high-time frame resistance that it previously faced in the range of $ 280 to $ 300. 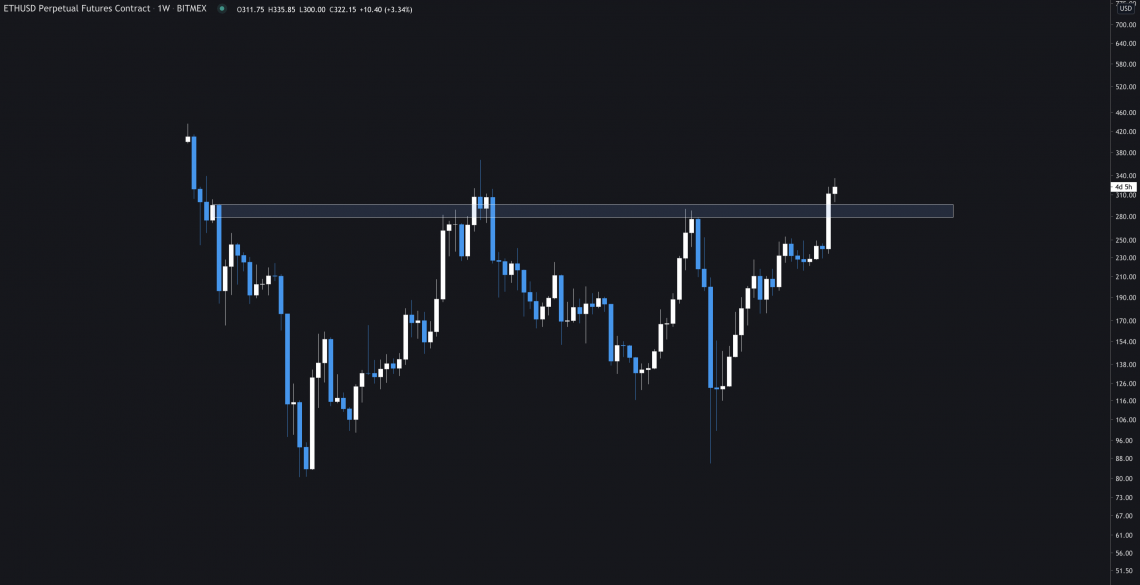 ETC price is currently making a third attempt at breaking out of the minor resistance.

The long-term indicators are rising, indicating that the price will eventually succeed in breaking out. However, a short-term pullback is likely needed before any upward move can resume.

The weekly chart for ETC shows a trading range in the range of $ 3.3 to $ 12, wherein the price has been trading since October 2018.

The price reached the resistance area of ​​this range in February 2020 and started moving down rapidly, up to as low as $ 3.3 next month. ETC price has increased mostly since then.

Currently, prices are making a third attempt to break out of the 0.382 Fib level of the entire decline.

Two previous attempts were unsuccessful, leaving long wicks on. If it succeeds in breaking out, the next resistance area will be found at $ 8.25, the 0.5 Fib level of the whole decline.

Technical indicators are likely to increase. The weekly RSI has surpassed 50 and is moving up. The weekly index is also rising, having made a cross-rise.

Therefore, the long-term trend is up. 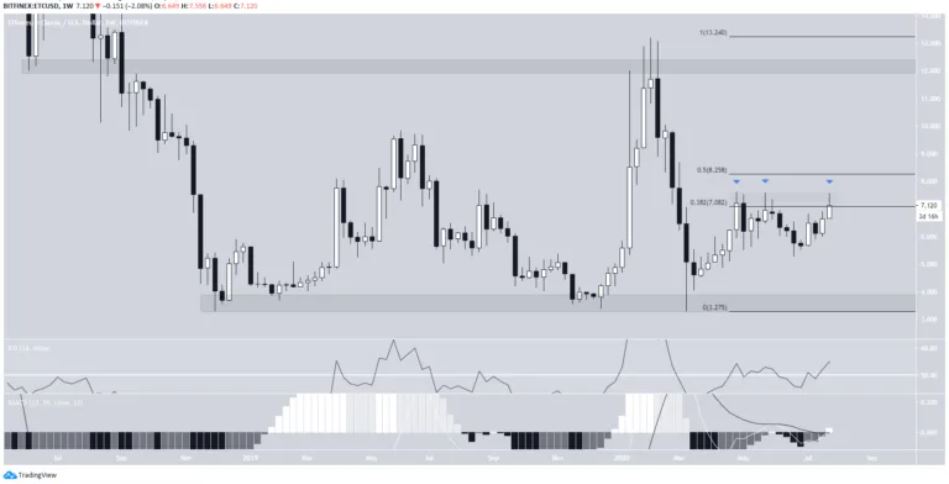 The daily chart for ETC shows that once the price reached the aforementioned resistance area, it created a Doji candle, which is considered a bearish sign when coming after an up move.

Besides, the Doji coincides with the resistance line of the parallel channel drawn connecting the most recent lows and lows. The declining momentum in the daily indicator also warns of an upcoming decline. 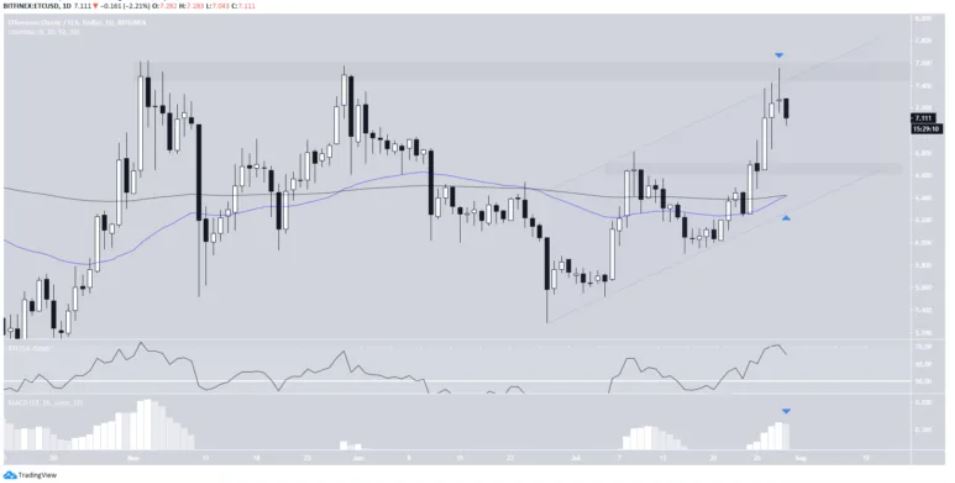 The nearest minor support level found near $ 6.65, coinciding with the impending crossover between the 50- and 200-day MA and the ascending support line of the channel.

ZEC price has increased since bottoming out on March 13. The level increases gradually, taking the shape of a channel that increases in parallel.

On July 27, the price exited this channel and is currently in the process of confirming it is a support. However, the price is stuck between this support line, and the $ 74 resistance zone, the highest level in March.

Technical indicators are still rising, though the rally has begun to level off. The RSI is overbought but has not formed any bearish divergences.

While the MACD is losing steam, with the daily momentum bar currently lower than the previous level, it has not yet reached the close so that that bar may rise.

Therefore, a breakout from this resistance zone is a very potential scenario. 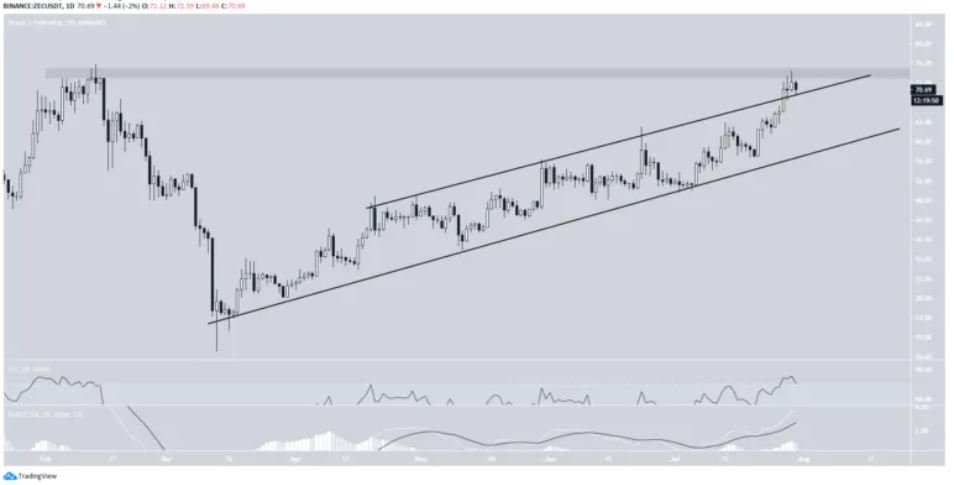 Looking at the weekly price action formed from March, we can see a double peak shape that can be seen by a potential long wick.

However, the technical indicators support a rally. Both the RSI and the MACD are growing and have not even been overbought before. If the price breaks down successfully, the next resistance level will be found at $ 115. 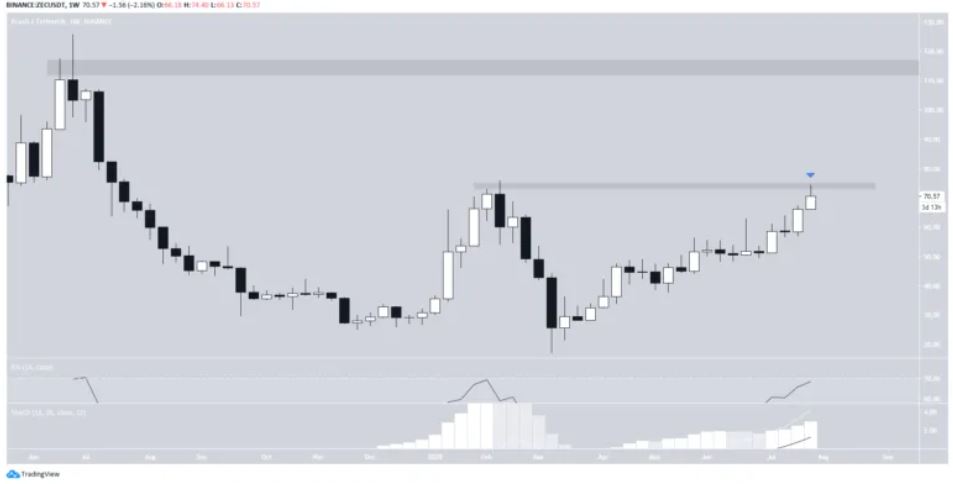