After a long period of trading sideways, Bitcoin’s volatility is starting to return to normal, with crypto currently risking their way towards the top of its macro trading range.

Overnight, buyers were able to send the BTC price flying across the five-digit price area and cause analysts now to expect traders to target $ 10,500 in the short term. However, it’s important to note that the Bitcoin price has risen by 12.76% since rising from $ 9,142 on July 21 and the price has yet to retest the basic support of around $ 9,450.

There is also a CME gap at $ 9,615 that has not yet been filled. Because traders’ attributes are important for CME gaps, any pullback below $ 9,800 will increase the likelihood that the gap will be filled.

Bitcoin price has broken through the $ 10,000 level again after consolidating at $ 9,900 for hours. While it’s still unclear when BTC has turned $ 10,000 into support, a prominent stock/futures trader is expecting a bigger breakthrough in the coming weeks and months. 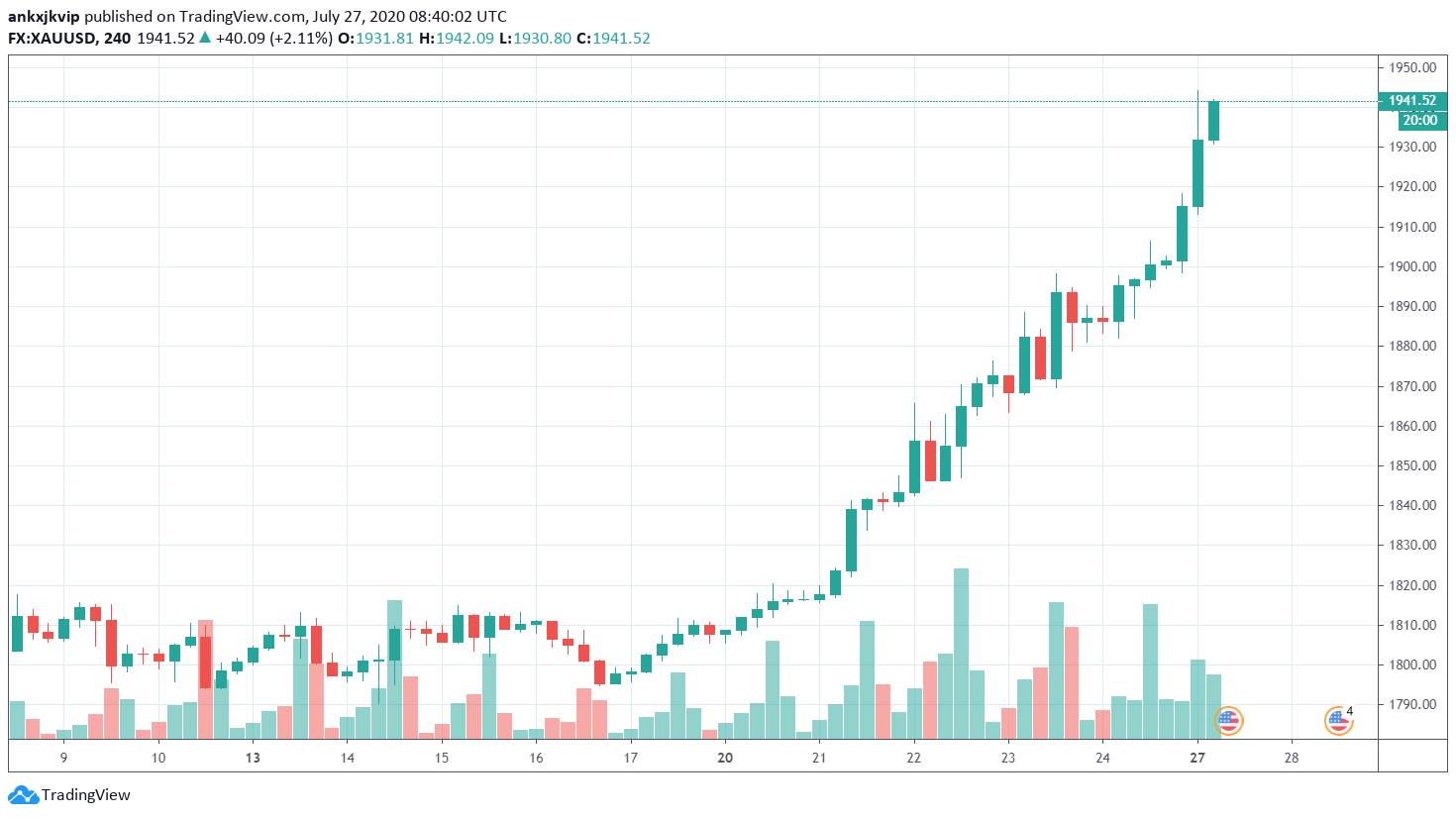 According to TradingView, following the boom of gold, Bitcoin passed $ 10,300, a level last seen on June 1. 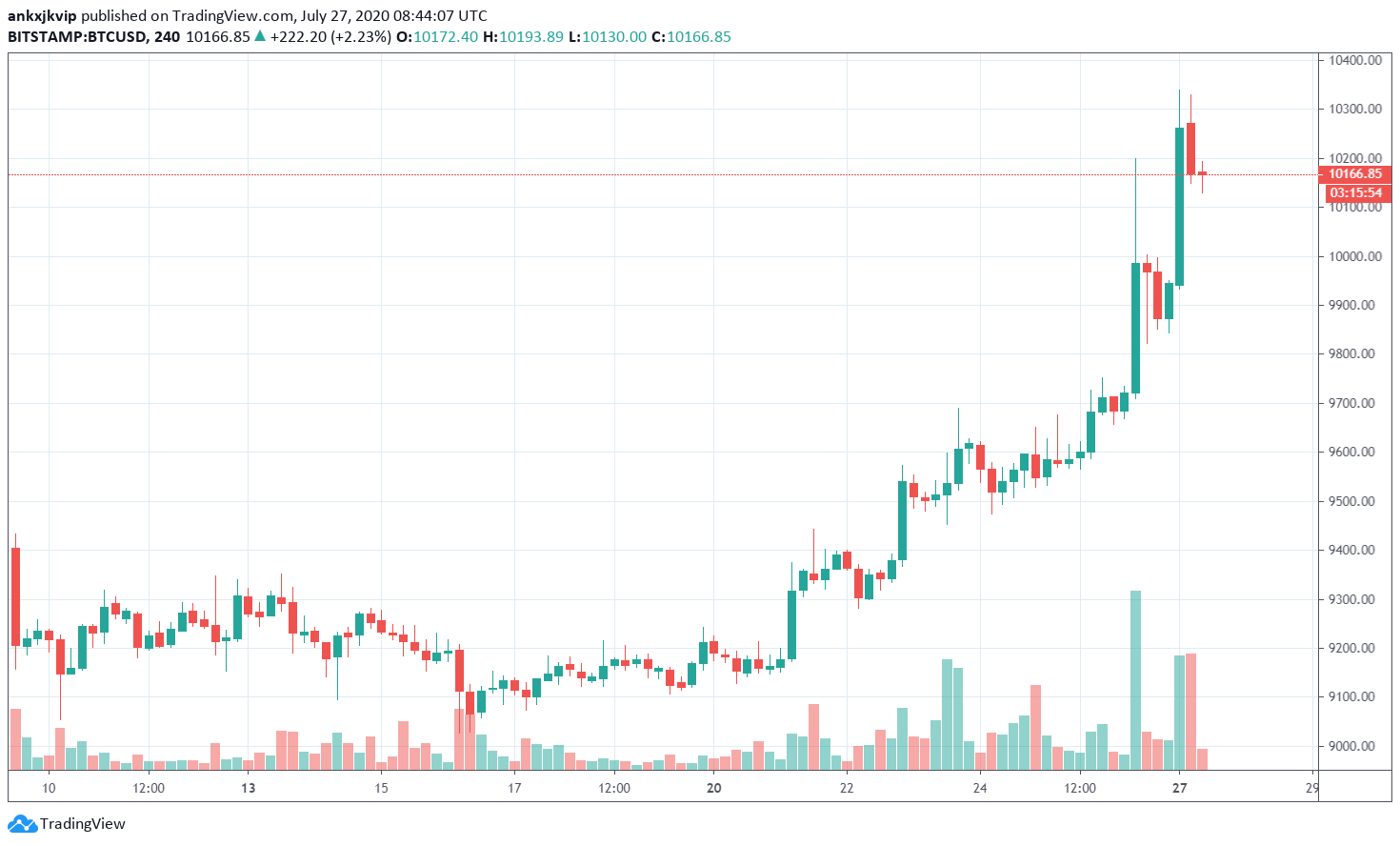 Trader Adam Mancini said that Bitcoin could soon follow gold to be higher. This will result in a move to $ 15,000, then climb even higher.

“BTCUSD is setting up for a move – likely to follow in $GOLD’s footsteps. We’re coiling into a multi-year triangle, and these don’t resolve with small moves. Given the trend entering this pattern was up, this should resolve the same way with 15k then 24k targets.”

Mancini is not the only one expecting Bitcoin to soon visit the region of around $ 15,000. Typically, analyst “Ethereum Jack” recently said that whales who bought the alt bottom that is accumulating Bitcoin will create momentum for the price of BTC to increase the parabola to $ 17k.

Over the past few weeks, most digital assets, including Bitcoin and ETH, seem to have entered an uptrend, breaking important resistance.

The price action of ETH is particularly appealing to investors due to its uptrend strength. In just the past five days, the assets have increased by 30% ($ 245 to a peak of around $ 320). And in one week, assets increased by 40%.

However, there are figures that suggest that assets may soon regress.

“With ETH peaking at $316 yesterday, the DAA vs. Price YTD model shows that the surplus of daily active addresses transacting has finally been equalized by its price. For the first time since June 17th, there is now a deficit of DAA, which indicates the potential of a short-term pullback.” 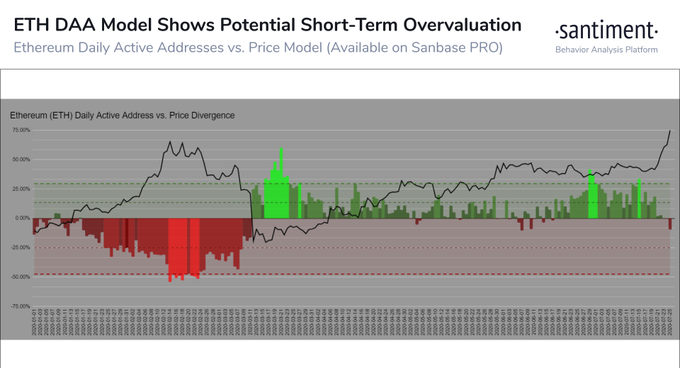 As for ETHBTC, trader “TraderXO” believes that ETH cannot outperform Bitcoin for too long, and may drop from its current price of 0.0313 BTC to a low of 0.025 BTC.

“ETHBTC – Pullback areas I would like to add to on spot holding.”

The XRP price has risen sharply when it broke out of the $ 0.202 resistance zone. It even trades above the $ 0.212 resistance level and is stable above the 100-hour SMA.

However, the price is facing barriers near the $ 0.2195 and $ 0.22 levels. There is also an important contract triangle formed with resistance near $ 0.2195 on the hourly chart of the XRP / USD pair. Above the triangle resistance, the next one might be $ 0.221.

ADA has been the most dominant altcoin in the market since it regained 100% of the value lost in June. At the time of writing, it is up nearly 3% and occupies the 6th position on Coinmarketcap, surpassing both Bitcoin SV, Litecoin, and Binance Coin.

Since trading in a sideways trend but going up in April and May, ADA managed to break out in mid-May, followed by a major breakout at the end of the month. This breakout allowed it to surpass the first resistance at $ 0.088, which was bounced back in June 2019. When ADA was locked in this bull run, which began in June, the price increased by 44% within a month and a half, breaking two other resistance levels at $ 0.15 and $ 0.112 respectively.

This impulse from June has witnessed a trend line at the lower end of the price scale pattern that it has tried to glide through twice. The most recent in ADA’s move was the resistance of $ 0.112, the trend line was touched [but not broken] when the price was pushed as high as $ 0.148. There is no immediate resistance level ahead, but looking at the weekly chart, resistance levels can be found at $ 0.162 and $ 0.23 respectively.

An interesting contradiction in the ADA chart is its cash flow. While the price has risen two digits each week at the beginning of the month, the Chaikin Cash flow indicator has been falling since the end of June. On June 30, the CMF reached an annual high of 0.34 and began to decline, reaching a low of 0.18 on July 20 before rising. This is a sign that the new cash flow into ADA decreased despite the price increase.

The ADA has experienced a mutation that has not been possible in the past few months, pushing its price and position higher and higher. When it surpasses $ 0.13 did not come with the newly increased volume of money, this may spur another increase. However, due to the severity of the rally, the price can pull back and if so, support is at the bottom of the trend line at $ 0.1131, and below it is $ 0.172 and $ 0.105.

A sell setup has perfected after today’s push higher – could this be the end of XRP price recovery already?

MakerDAO, the DeFi oldest project has surpassed $1 billion for the first time