Bitcoin price held the key support of $ 9,000, after which a rally to $ 9,600 occurred. However, the general market trend for BTC price has not exceeded its range since halving in May.

In the battle between gold and Bitcoin as a better store of value, both actually had a pretty good week. Bitcoin, Ethereum, and other cryptocurrencies saw a price rally over the weekend, but none of the top currencies hit the all-time highs.

The past few days have been impressive for the Bitcoin market. King Coin has started the week at around $ 9,200, but now BTC trades at $ 9,700 after benefiting from Ethereum’s price increase.

With recent price action, analysts argue that Bitcoin is expected to witness a higher explosive move reminiscent of October 2019. But, not everyone believes that.

Analyst “Bob Loukas” does not believe that assets will break higher from here. Referring to the chart below, he said that assets can still fall into $ 7,000 when BTC faces strong resistance.

“Continue to believe in bullish accumulation #bitcoin. Timing ripe (new cycle) for a significant move higher here. Cannot rule out another 40day consolidation though, which ends with a sharp V pattern from $7k’s or a volatility surge. Sorry to those looking for an exact prediction.” 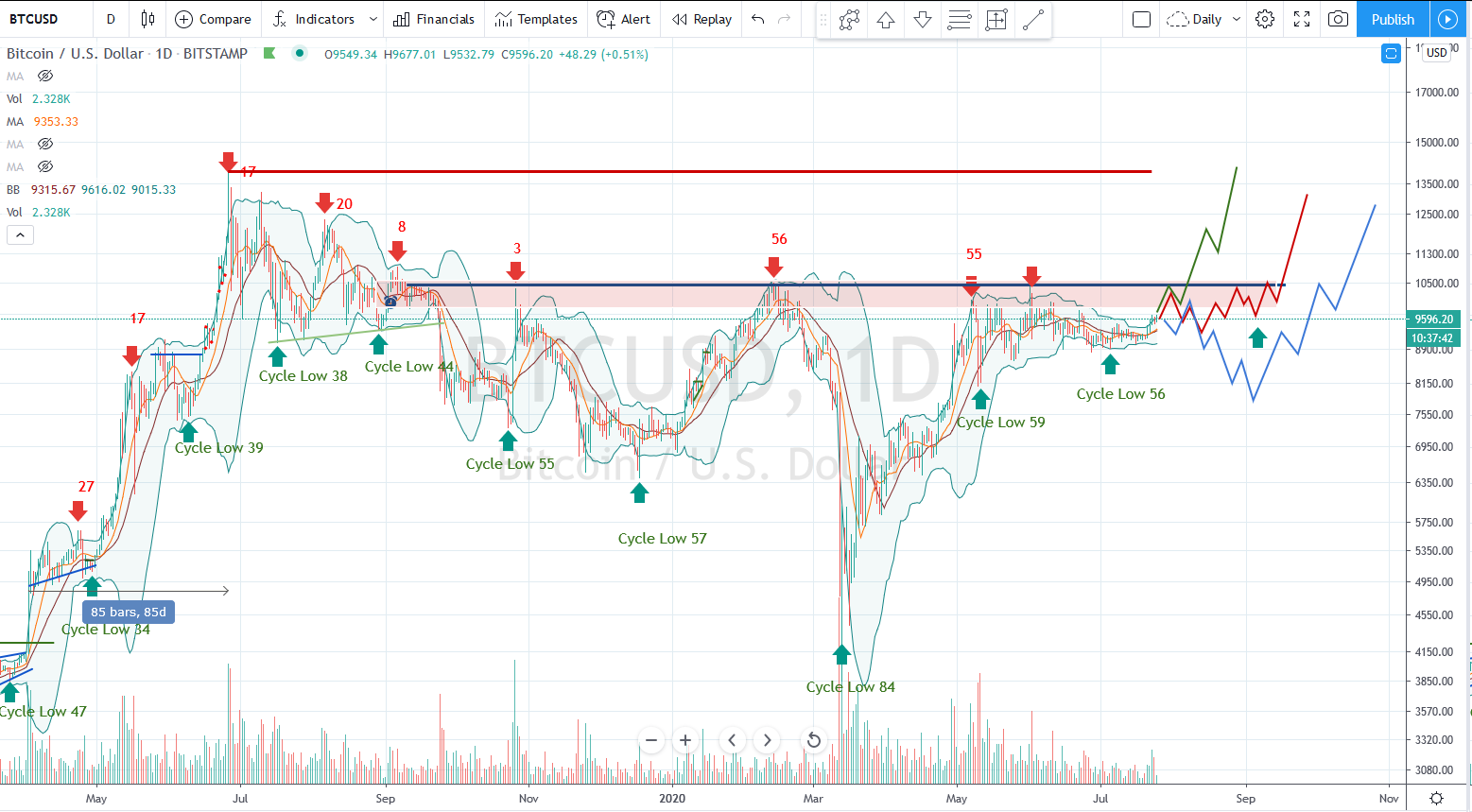 Loukas is not the only trader who believes that a correction can occur before Bitcoin enters a macro-growth market.

Trader “TraderXO” shared the chart below, showing Bitcoin may see “one last set of cycle lows” before moving to a new all-time high. He anticipates Bitcoin to move down $ 6,000 and $ 7,000 again.

ETH and the synthetic cryptocurrency market have grown stronger recently.

After a long period of underperformance relative to Bitcoin and trading around the lower boundary of its macro trading range in the range of $ 230 to $ 250, ETH eventually broke this trend and began to gain independence.

Earlier this week, altcoins generated a remarkable momentum that eventually allowed it to rise from the $ 230 low to $ 290 high.

This is a high time frame resistance and buyers have not yet overcome it.

ETH is currently entering the consolidation phase as the seller continues to defend the area above $ 280. If this level is not broken above, the cryptocurrency may be ready to see a noticeable drop.

An analyst is currently noting that he believes the cryptocurrency is ready for a pullback, which could cause it to drop to $ 250.

“ETH: If I had to speculate for the ‘near’ future, it would look like this. Wouldn’t be surprised if there was a greater retest of 250-260 (yet to see a major shakeout) before the 4th attempt at resistance. With that 4th attempt, I’d expect an explosive move upwards.”

In order for cryptocurrencies to continue rising higher in the coming days and weeks, Ethereum must break $ 307, according to analyst “Josh Rager”.

“Daily resistance around $286 and no close here means potential pullback, before the next test. But above that around $307 is the big test. Once ETH breaks and closes above $307 – I don’t see long until it hits over $400 – at least on higher time frames.”

Despite the strong price performance of XRP over the past 24 hours, there are still investors who believe this asset is not yet in a bull market. This appears in spite of the analysis indicating that the asset has penetrated important macro resistance levels.

Trader “Crypto Dog” shared the chart below after XRP started rallying on Saturday.

“This is the beginning of XRP.” 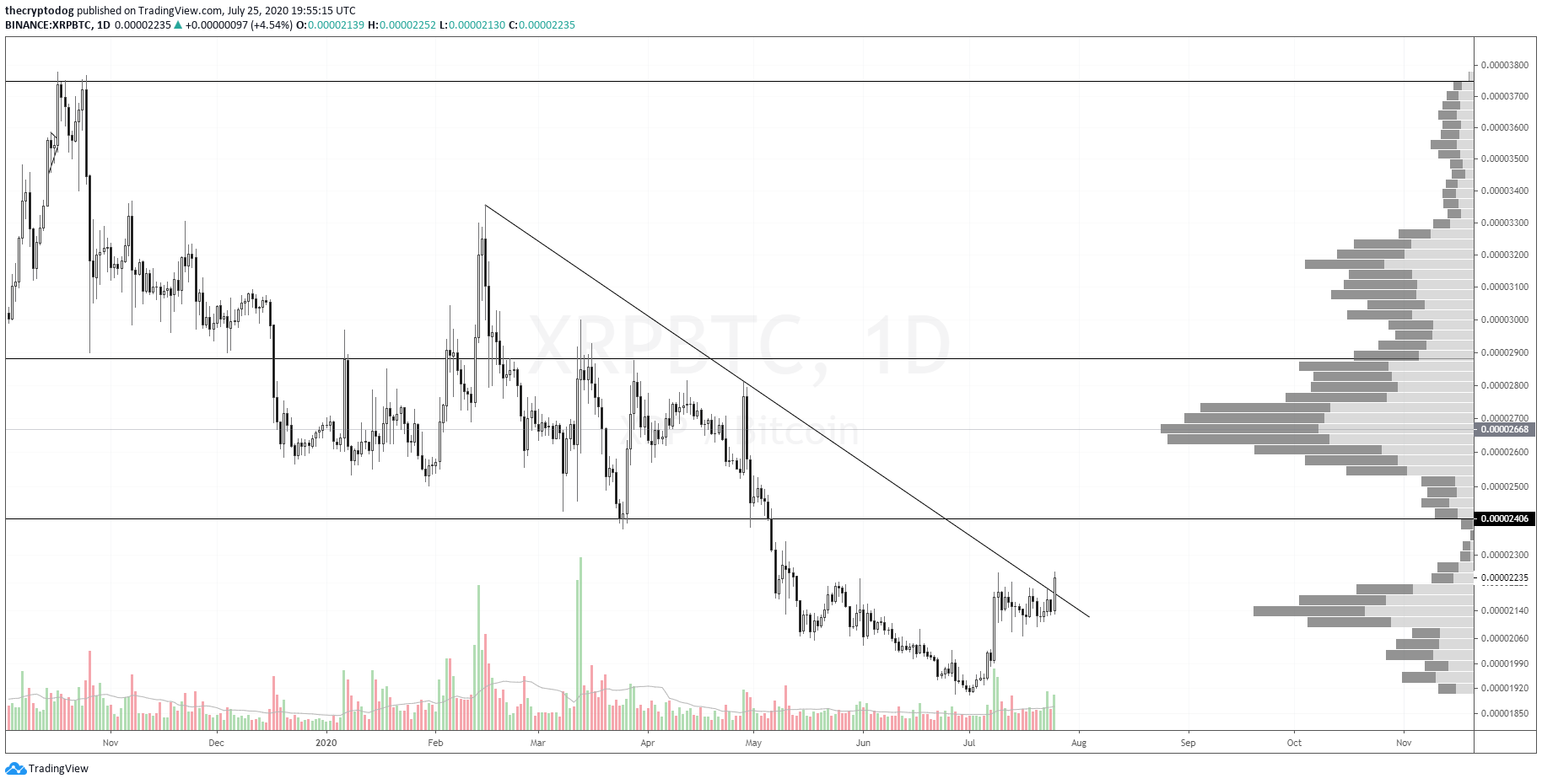 ADA price has just set new highs in 2020. Today’s dramatic escalation comes shortly after Shelley’s mainnet transition is underway, with ADA investors taking advantage of this as an opportunity to buy news.

Cryptocurrencies are currently pushing through some significant resistance, but the technical implications of this latest movement suggest that the next bull run might be imminent.

Yesterday, parent company Cardano IOHK initiated the Shelley hard fork process, which will take place over the next five days.

The hard fork will go smoothly if next Monday, the process does not encounter unexpected problems and is not canceled.

Investors were pleased to see that the final step towards the transition from Byron to Shelley was completed and that the ADA price has risen sharply since then.

At the time of writing, Cardano is trading up nearly 15% with the current price of $ 0.149.
This marks a noteworthy escalation from the recent $ 0.115 low that was set earlier this week. 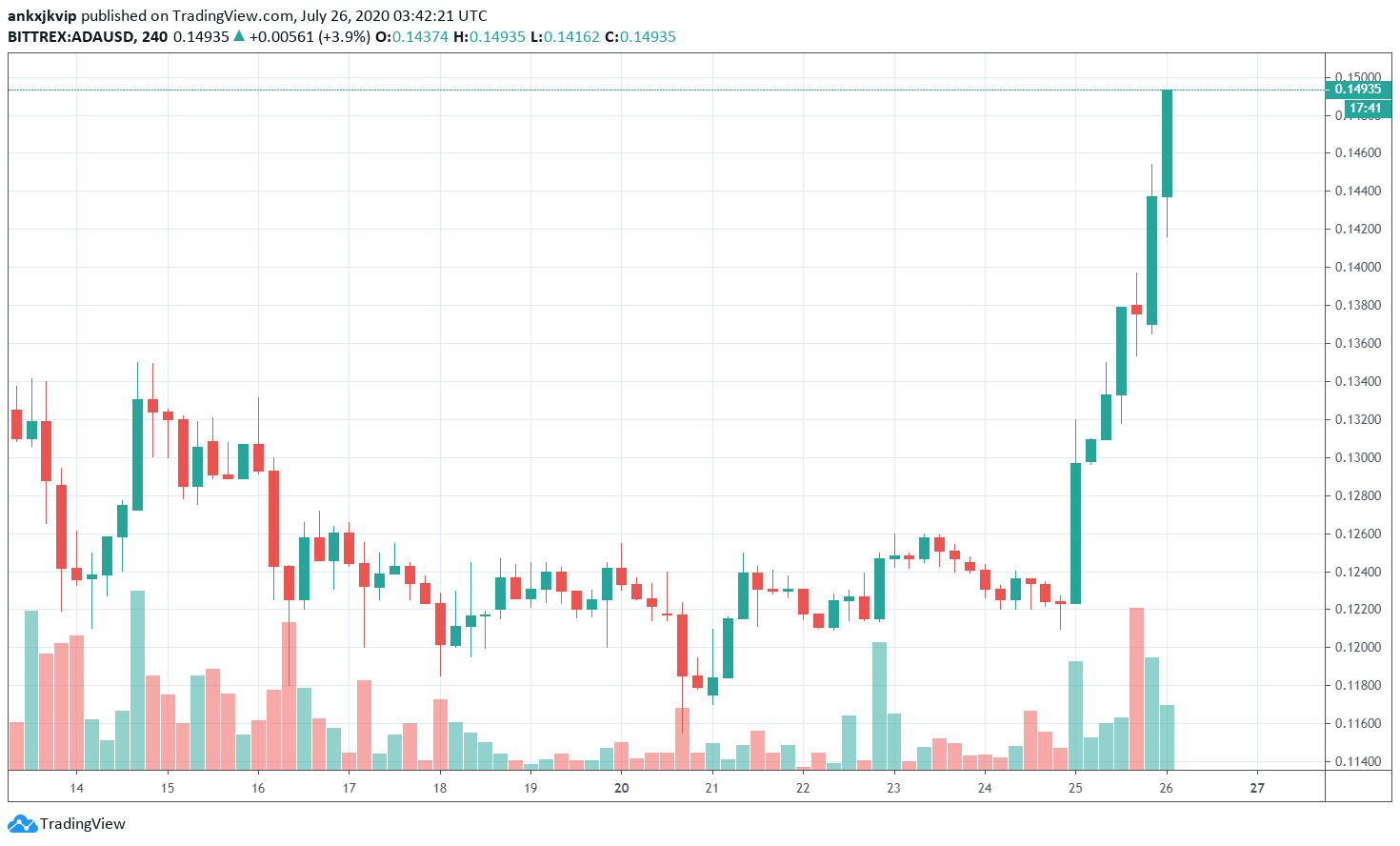 While talking about the technical factors driving this movement, an analyst noted that it appears to have stemmed from a break up above the upper boundary of a rising flag. This can also open the gate to increase more. 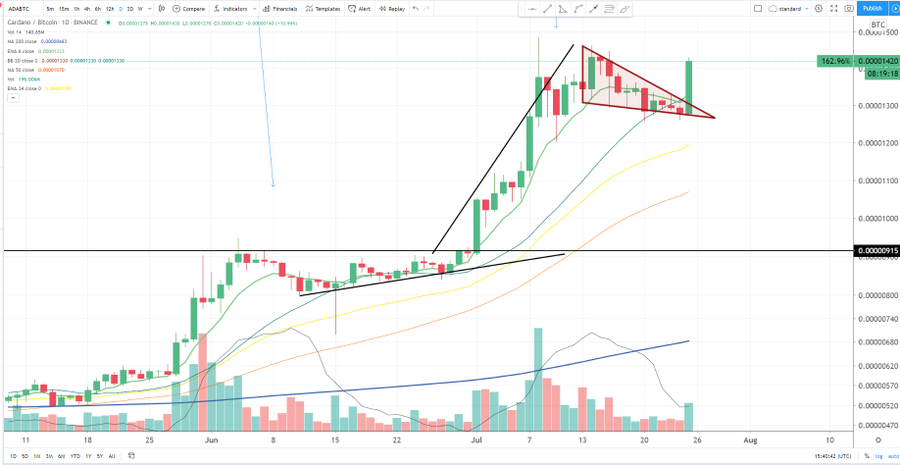 Bitcoin price over recent days has been impressive, but even more so is that of gold