Crypto price analysis 7/24: Bitcoin is likely to resume upward and break out above $9,750 plus ETH, LINk, XLM, DOGE, LEND

Discussing the rise of the Bitcoin organization on July 23, Charles Edwards, Capriole’s digital asset manager, said that Bitcoin would surpass $ 20,000 if US banks invested 1% of their assets.

This week, US lenders received a green light from regulators to engage in cryptocurrency custody activities. Will an influx from this sector eventually benefit Bitcoin when assets remain a controversial subject?

Yesterday, Bitcoin price created another bullish candlestick with wicks on both sides. This is the third consecutive bullish candle since the breakout on July 21.

The recovery seems to have stalled at 0.5 Fib of the entire decline beginning on June 1.
In the most recent decline, the price has moved a bit above the 0.85 Fib level.

Since this is not a common reversal, it is likely that the price will eventually rise above the June 22 high of $ 9,780. 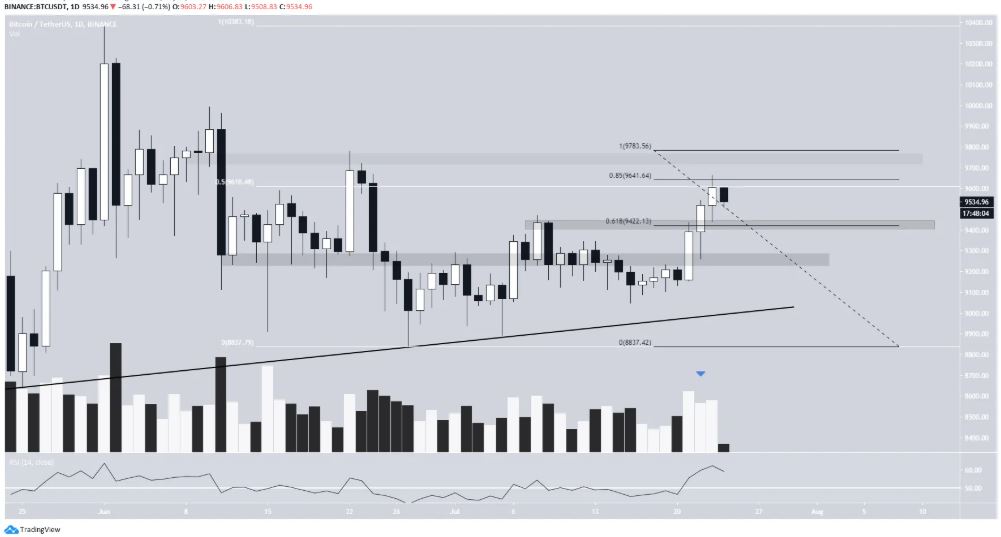 The hourly chart shows the price that has begun to recover after creating a significant bearish divergence in the hourly RSI.

While the price has begun to recover, it seems to have found support above the 50-hour moving average (MA).

Volume has been much lower during the decline, so it’s likely that this was just a pullback instead of starting a new downtrend. 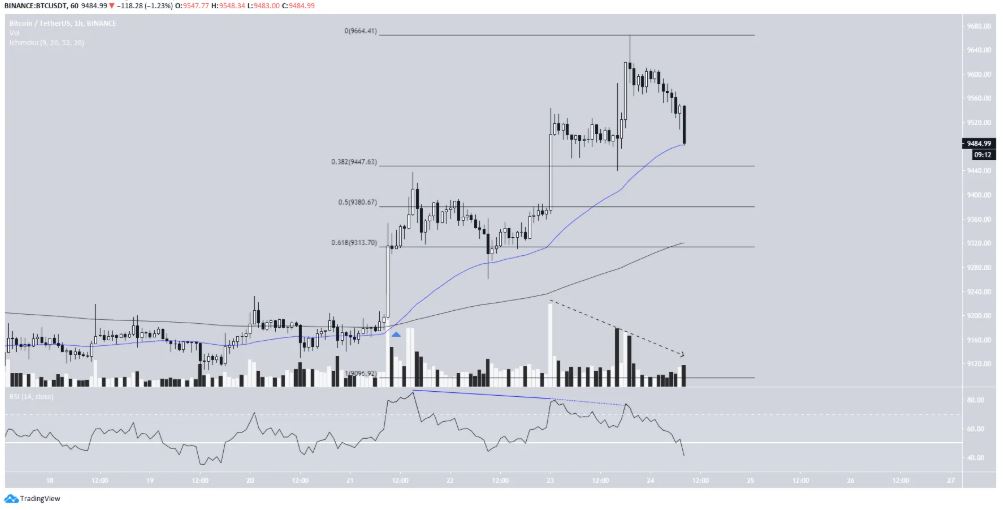 Bitcoin price has increased since July 17. The strong increase on July 21, showing that wave-3 has begun.

It seems that yesterday’s high was the peak of this third wave, and the price is now beginning to correct, currently completing wave A of an ABC formation.

The most appropriate level for this correction will end near the 0.5 Fib level at $ 9,380, which closely matches the support from the first part.

Because the second wave correction has gone deep (0.618 Fib), the current wave will be shallower, so the retreat to 0.38-0.5 Fib levels. 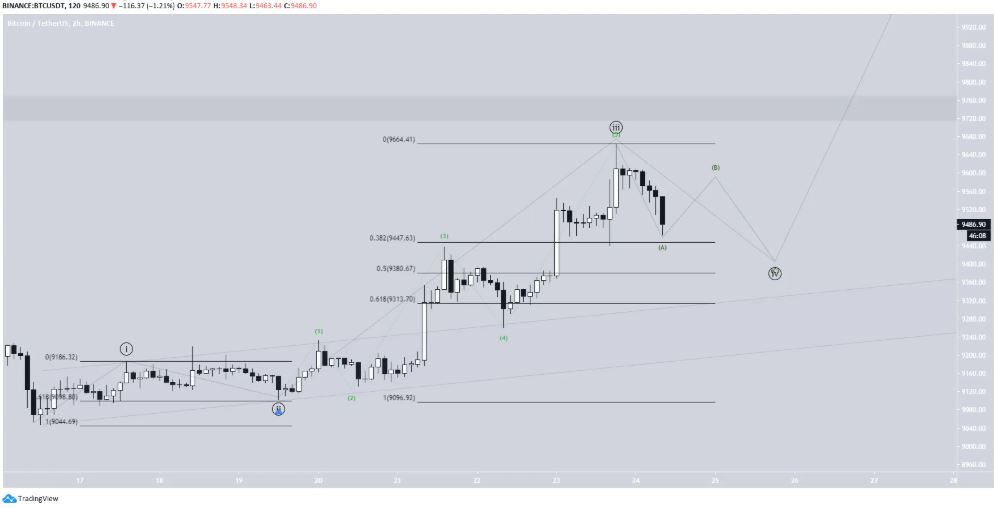 ETH ETH rose higher yesterday that allowed it to break the upper boundary of its macro trading range between $230 and $250.

This allows the cryptocurrency to completely change its technical trajectory, as analysts are currently noticing that it may be ready to push significantly higher in the coming days and weeks.

Analyst “Pentoshi” explained that ETH has now passed many major levels and has only formed the first highest level since March.

A fund manager is setting his goal to $ 350. He points to the breaking of cryptocurrencies over its extended trading range, referring to a chart that shows previous trading range breakouts have caused ETH to see some notable upsides. 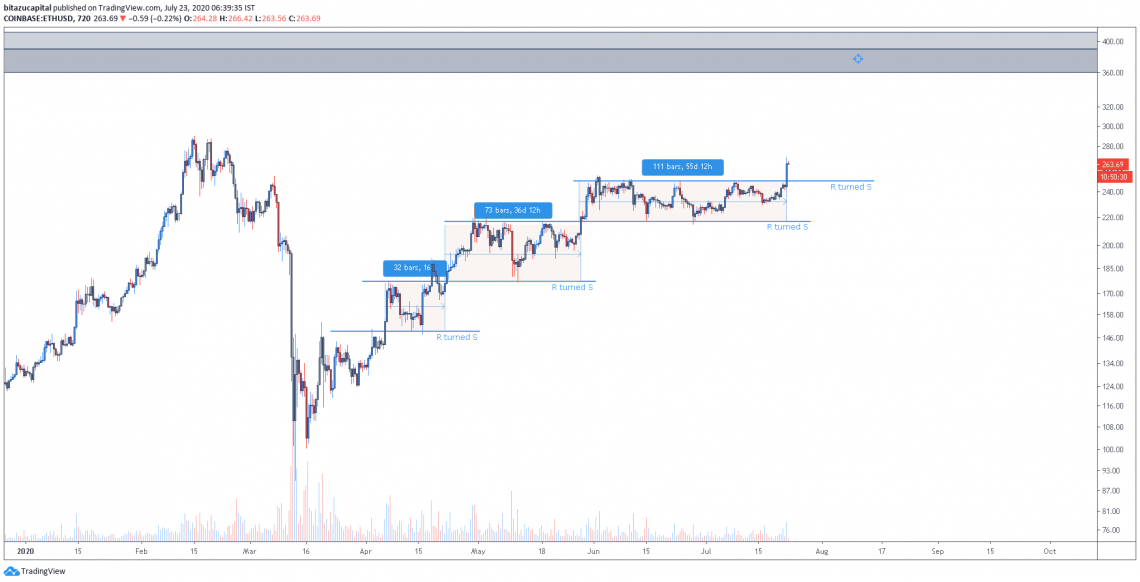 The daily chart of Chainlink (LINK) indicates that its price has gone up when forming part of the ascending channel. When the LINK marked higher highs and higher lows, it moved along the parallel line, noting the increasing volatility at the end of June.

When July started, LINK has increased by 85% since April. With the price registering for further growth, the ascending channel indicates that a price change may originate early in the market. 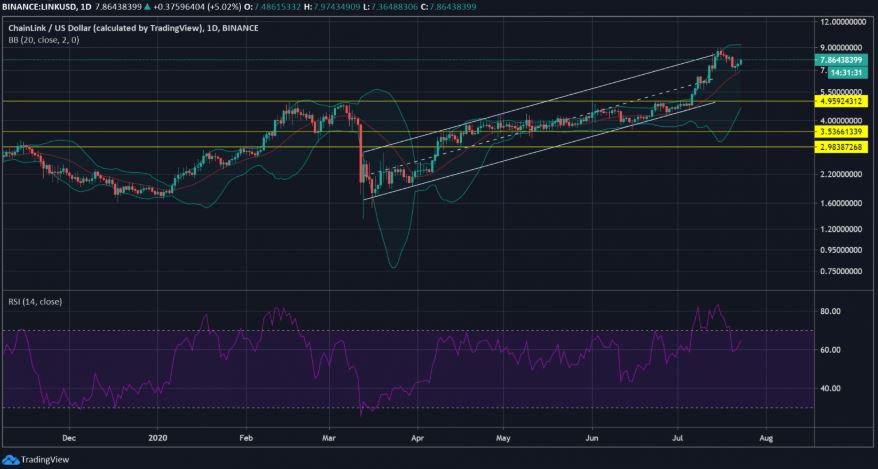 The large divergence on the Bollinger Bands shows an increase in volatility in the LINK market, one that can continue when the bands are far apart. The signal line has occupied the position below the price bars, emphasizing the strong uptrend. However, as the day passes, the signal line is close to the gap and can cross above the price candles.

Moreover, the RSI also indicated that LINK was in the overbought zone from July 6 to July 19 and went into equilibrium afterward. However, LINK once again approached the overbought area, indicating a high buying pressure in the market. 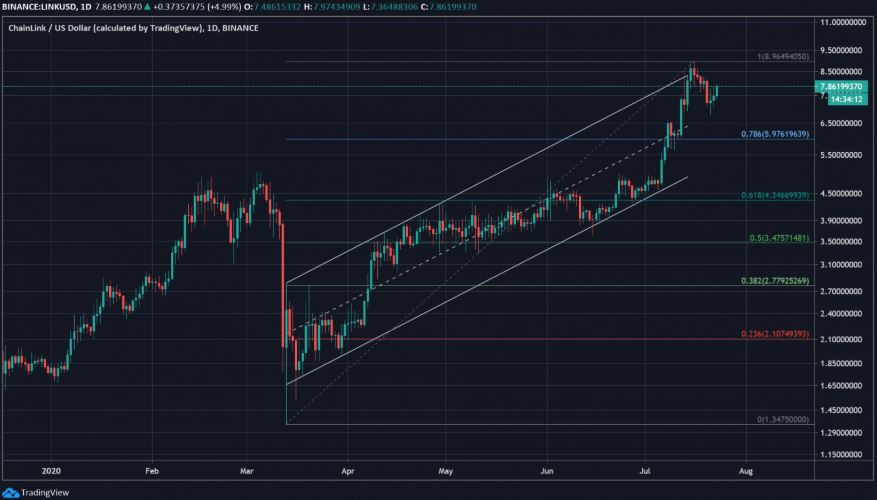 XLM price has broken above a long-term symmetrical triangle, an indication that price may have started an uptrend.

XLM has been locked in a downward spiral since November 2018 and has lost about 90% of its value in the following year. The price hit bottom in August 2019, when the price created a long lower shadow candle that reached 433 satoshis.

Then it started forming a symmetrical triangle and breaking up on this pattern in the first week of July.

In addition to the triangle formation, the price also moved up above the resistance zone of 900 sts, currently playing a supporting role.

Technical indicators suggest the price will continue to rise. The weekly RSI moved above 50 and did not create any bearish divergences. The price has moved above the 50-day MA, which has previously provided resistance and is now likely to act as a support. 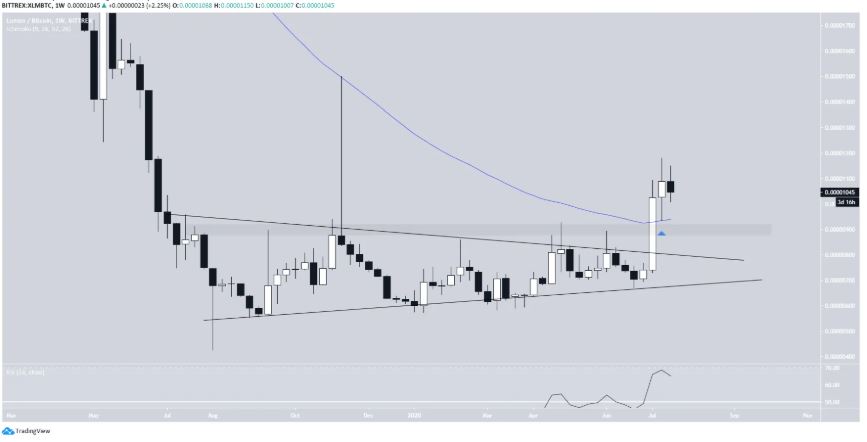 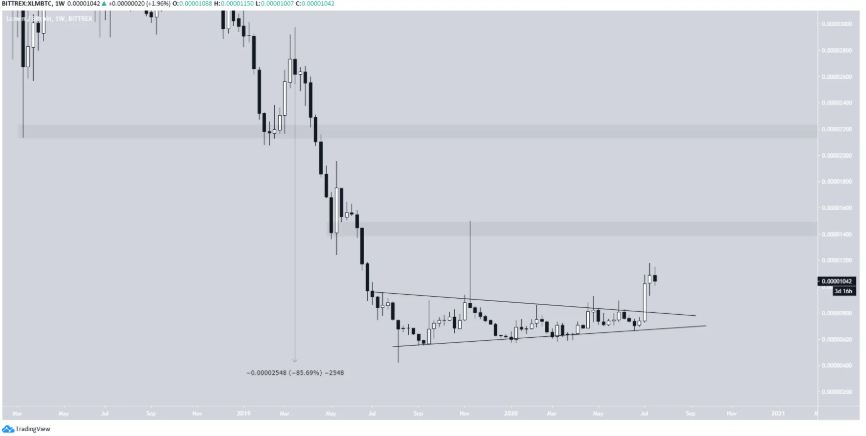 The daily chart shows that XLM has increased at an accelerating pace since June 27. However, it seems that the uptrend may have actually started in May, and the price is in the third wave and may have reached a peak.

While the 50- and 200-day MA has created a golden cross, confirming the uptrend, XLM has created a bearish divergence in the daily time frame, suggesting that a decline is likely to occur.

Dropping below the top of the first wave at 920 sts may invalidate these waves. 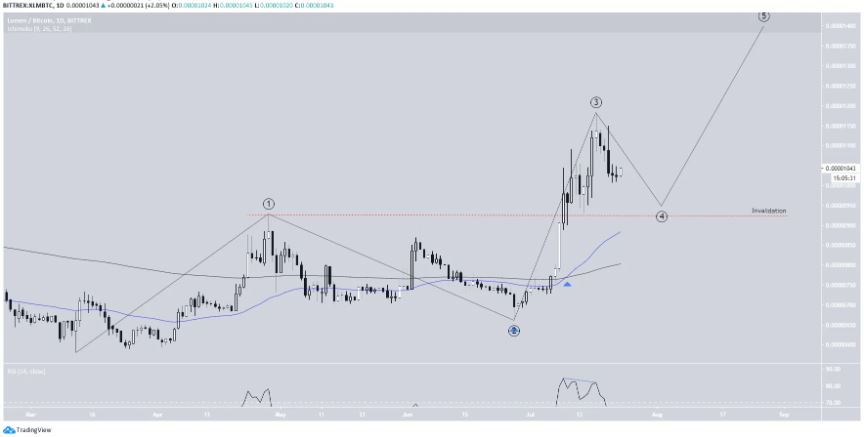 On July 6, DOGE price initiated a rapid bullish move that broke it above the descending resistance line that began in October 2019. After that, it increased by 135% in two days.
However, the price has dropped since then and lost most of the gains earned during the breakout.

The price has pulled back to the previous descending resistance line and found support on the 50- and 200-day MA, which created a golden cross.

This will be a level that is likely to help the price keep moving upwards.

After the breakout, the price has retreated to Fib 0.786 and created a higher low since then. Also, although the slope of the descending resistance line is difficult to pinpoint (due to numerous wicks), the price has broken above this line, even the most gentle slope.

Therefore, there is a possibility that DOGE will continue moving upwards.

LEND suffered the most significant decline in nearly three weeks, after increasing by more than 1,000% since April 2020.

Its rise has come amid a booming craze for decentralized financial projects (DeFi). The Aave protocol allows LEND users to earn interest on deposits and property loans at steady or variable rates. The protocol also provides an extremely ultra-short duration, collateralized flash loans.

Meanwhile, LEND is also increasing the number of users of its lending protocol and optimism surrounding the “Credit Delegation” product launch. The bids for LEND tokens increased thanks to the ParaFi venture capital fund, investing $ 4.5 million in Aave. 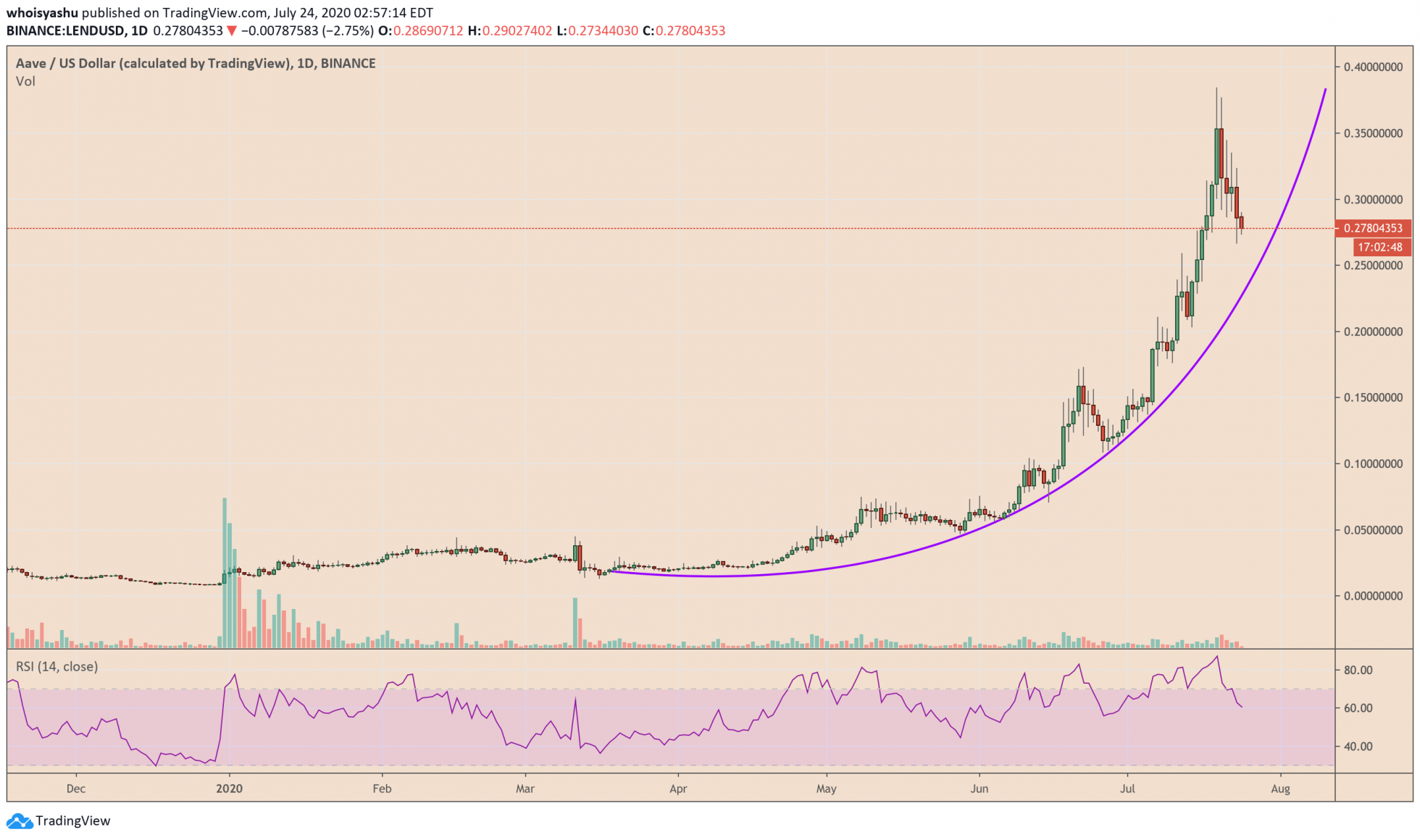 The parabolic rally supported the token in setting a record high of $ 0.384 earlier this week.

The all-time peak of LEND has driven daytime workers to offset their rising position – to ensure short-term profits partially. The first sign of selling sentiment has led to a more definite downside trend. As a result, the LEND / USD exchange rate fell by 30% from its $ 0.384 level on July 23.

The decline also appears when Bitcoin has caught the attention of traders after a breakout move. BTCUSD on Tuesday closed above the critical resistance of nearly $ 9,300, resulting in a wave of renewed enthusiasm in its market.

The increasing institutional interest in Bitcoin price is not hard to see as U.S. regulators green light custody

Bitcoin Suisse has raised $49 million in Series A