Crypto price analysis 7/21: Bitcoin will see a ‘monster breakout’ in the next few days as breaking $9,300 plus ETH, BCH, XLM, LEND

At the time of writing, King Coin has actually only increased by 1.6% in the past 24 hours and has been trading within the same 5% range for the past two weeks.

However, with the stock market showing extreme strength, Bitcoin may rally. The S&P 500 advanced higher on Monday after starting a slow session. At the close on Monday, the leading stock index traded 0.85% higher than the beginning.

With the strong correlation that has formed between the two markets, BTC may soon increase in the near future. 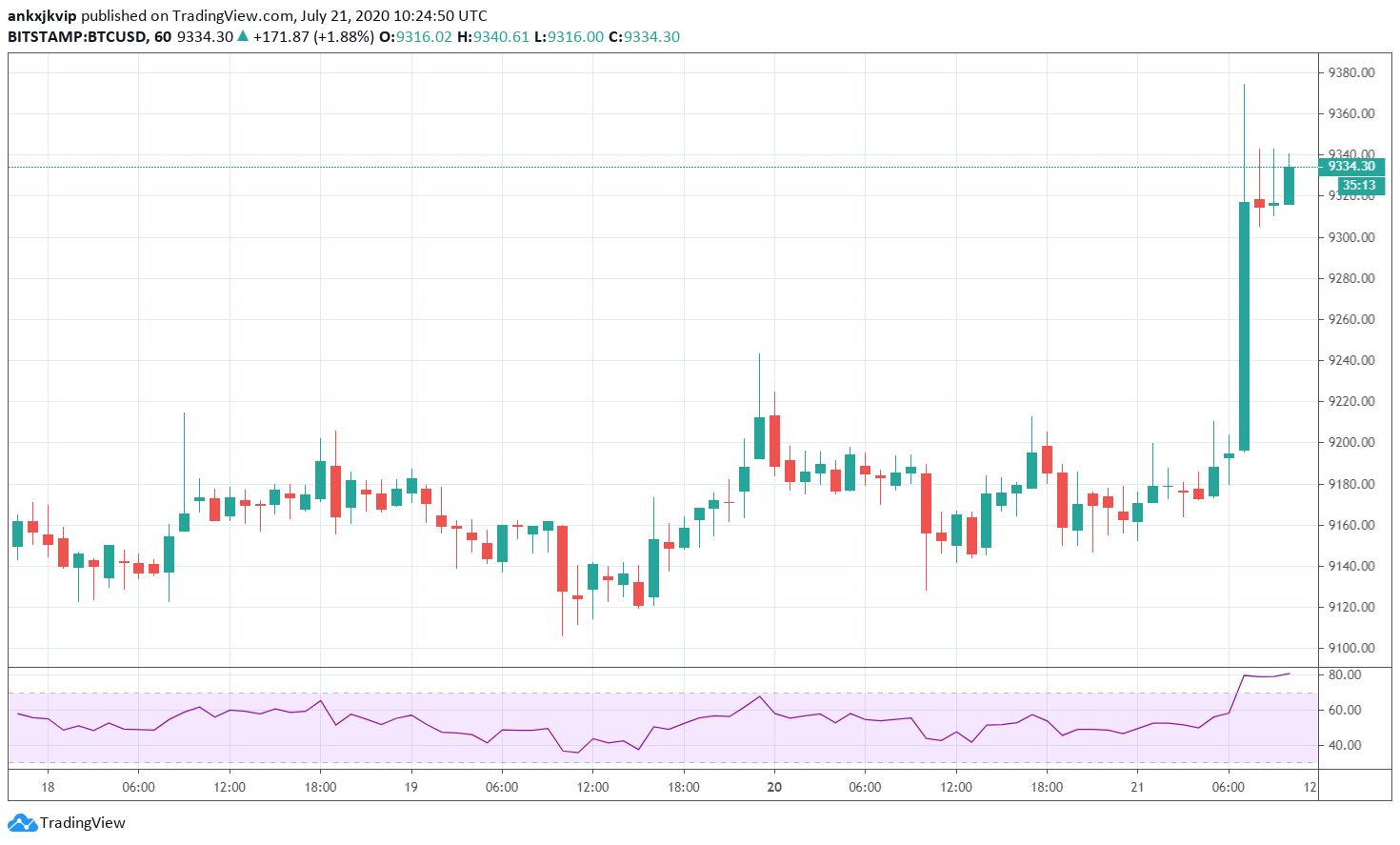 However, this move is far different from the explosive boom that some people are expecting. Case in point: volatility indicators, which barely notice 1-2% moves here and there, remain at multi-year lows. In fact, volatility in the Bitcoin market is at its lowest level since the explosive price hike of 2017.

Analysts are still convinced that the explosion has been imminent, citing these volatility indicators.

Luckily for the bulls, there seems to be a growing case for Bitcoin to continue higher after this latest upward move.

According to trader “CryptoBirb”, Bitcoin will witness a ‘monster breakout’ for the next three days as the price continues to tighten on a macro scale.

He shared the chart below that shows that according to the Bollinger Bands, an important technical indicator that represents volatility and major levels, the price action of BTC is extremely tight. 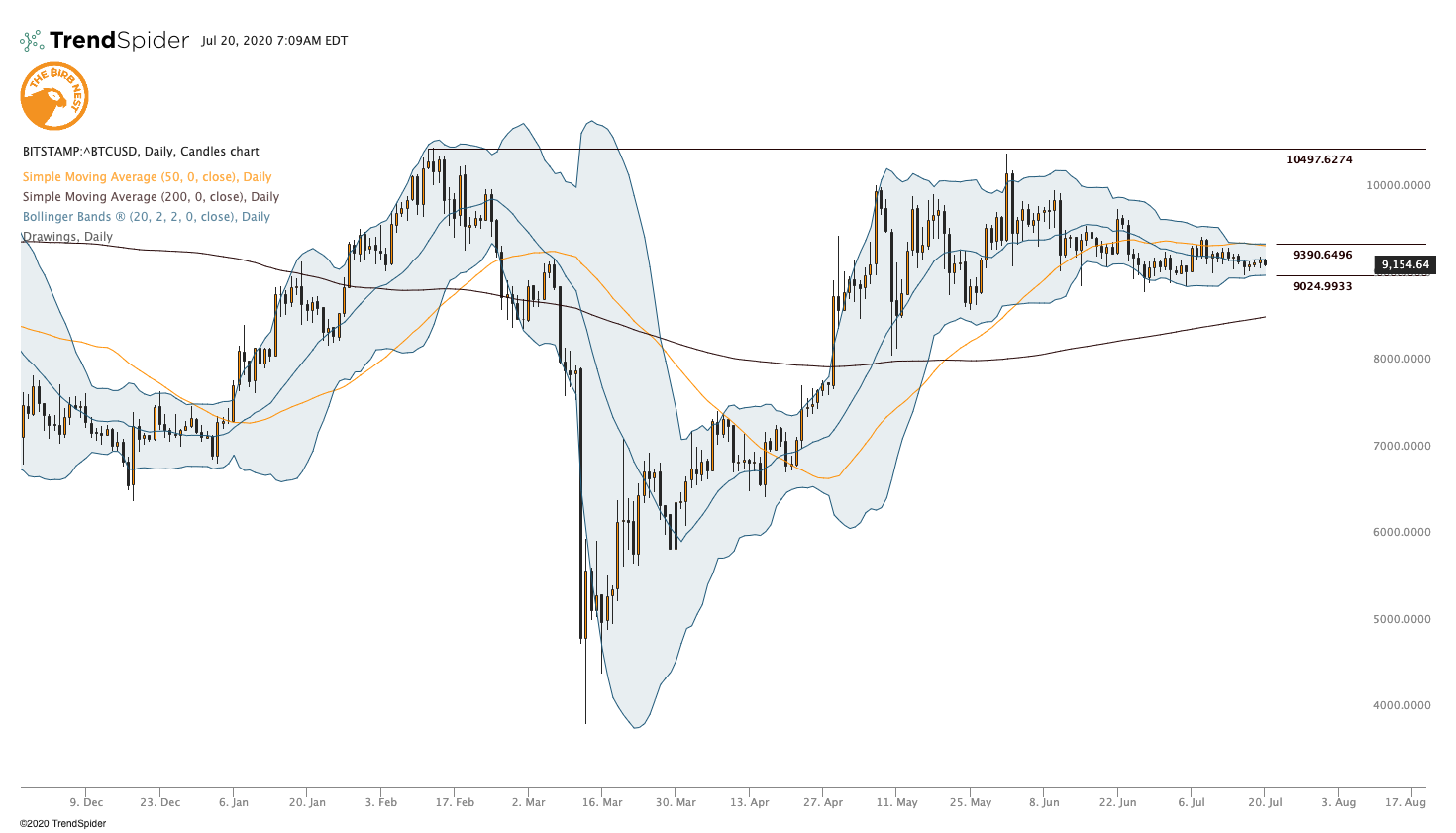 Analysts have found that the Bollinger Bands have been at their tightest since November 2018. Of course, following the consolidation was a 50% decline in the two weeks ending the bear market.

This suggests that a macro change rate is likely to occur within the next week or two.

After another decline of nearly $ 240, the Ethereum price corrected lower. ETH traded below the support of $ 236, but it still paid a good price above $ 232.

The price is currently trading above the $ 237 and 100-hour SMA levels. However, it is presently facing barriers near the $ 238 level. There is also a major downtrend line forming with resistance near $ 238 on the hourly chart of ETH / USD.

However, the price is facing many hurdles on the upside, starting at $ 225. There is also a major downtrend line forming with resistance near $ 226 on the 4-hour chart of the BCH / USD pair.

A successful break above the trendline and then $ 230 can start a new rally. If successful, the bulls are likely heading towards retesting the $ 245. Any other benefits can push the price beyond the $ 250 resistance level.

Stellar (XLM) has seen some strong momentum in the past few weeks but is starting to show some signs of faltering as its buyer fails to overcome a critical resistance level that it has tested many times.

However, its current signs of weakness may not represent its short-term outlook because one analyst noted that a range of factors suggest that XLM may be preparing for a new rally.

At the time of writing, XLM is trading more than 4% down at its current price of $ 0.095. This marks a drop from its recent high near $ 0.11 that was set earlier this week.

It is important to note that the cryptocurrency’s stalling momentum comes after it posted a wild rally that caused it to rise from a late June low of $ 0.06.

Before implementing this movement, an analyst predicted that a significant trend change was occurring, indicating the existence of a 301-day ascending triangle.

After breaking out of this technical model, the cryptocurrency started the escalation that eventually brought it to a recent high.

Analyst “Benjamin Blunts” are currently noticing that XLM may have plenty of fuel. In a recent tweet, he explained that XLM might soon increase. The chart he gave shows the goal to increase compared to BTC, about 60% higher than the current price.

“XLM is +46% since I started this thread, and I’m just here to remind you that it is going to get absolutely launched soon. It is easy to get caught up in the Defi craze, but they aren’t the only things that are hot right now.” 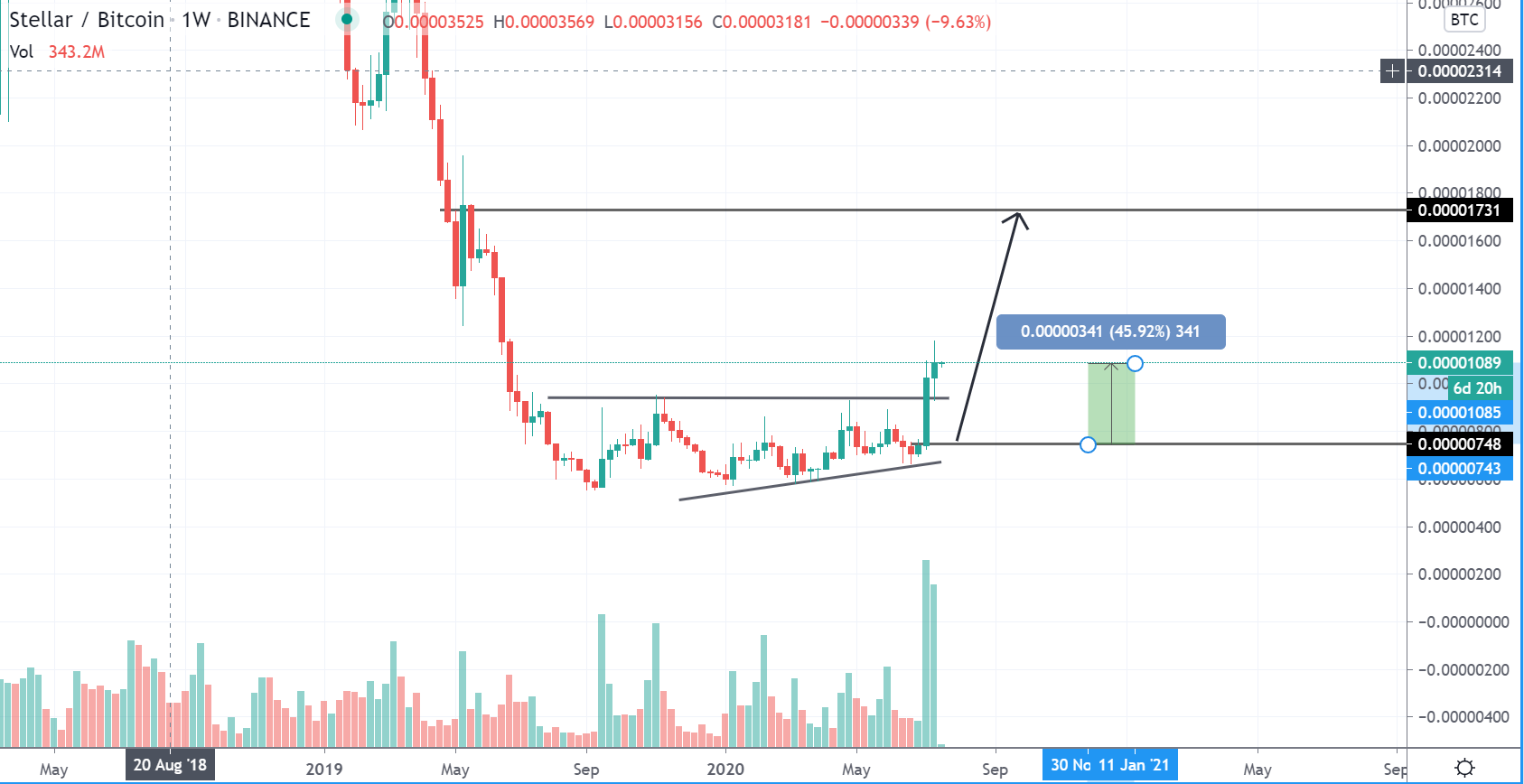 LEND has become the focus of the cryptocurrency market after the 1,500% price increase it enjoys throughout the year. In July alone, LEND soared almost 185% to reach an annual new high of $ 0.38. 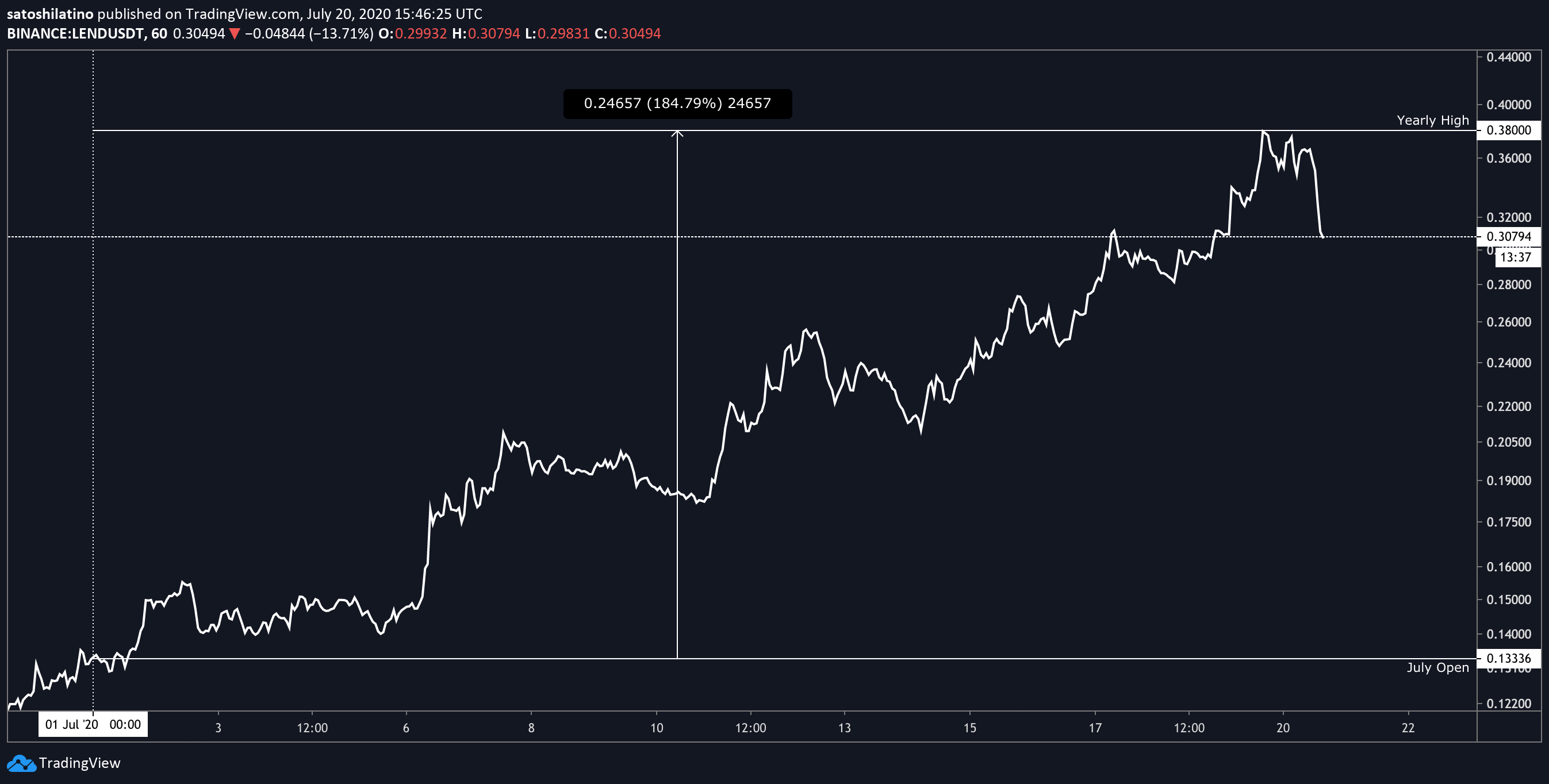 Given the significant benefits that Aave has posted, various figures predict that it is reaching its depletion point. Increasing the sale order may push DeFi tokens into the correction phase before the uptrend returns.

The TD Sequential indicator has proven to be essential in determining LEND price action. This technical indicator was able to predict some of the most significant depletion points on its 3-day chart over the past year.

At the end of February, for example, after it climbed to $ 0.043, the TD setup gave a sell signal in the form of a green nine candlestick. After forming the price decline, LEND has experienced a great price impulse, causing its price to plummet by nearly 62%.

The TD Sequential could also accurately estimate that this altcoin has reached an overbought zone in late April and June. After these sell signals are confirmed, the token has dropped by over 23% each time. 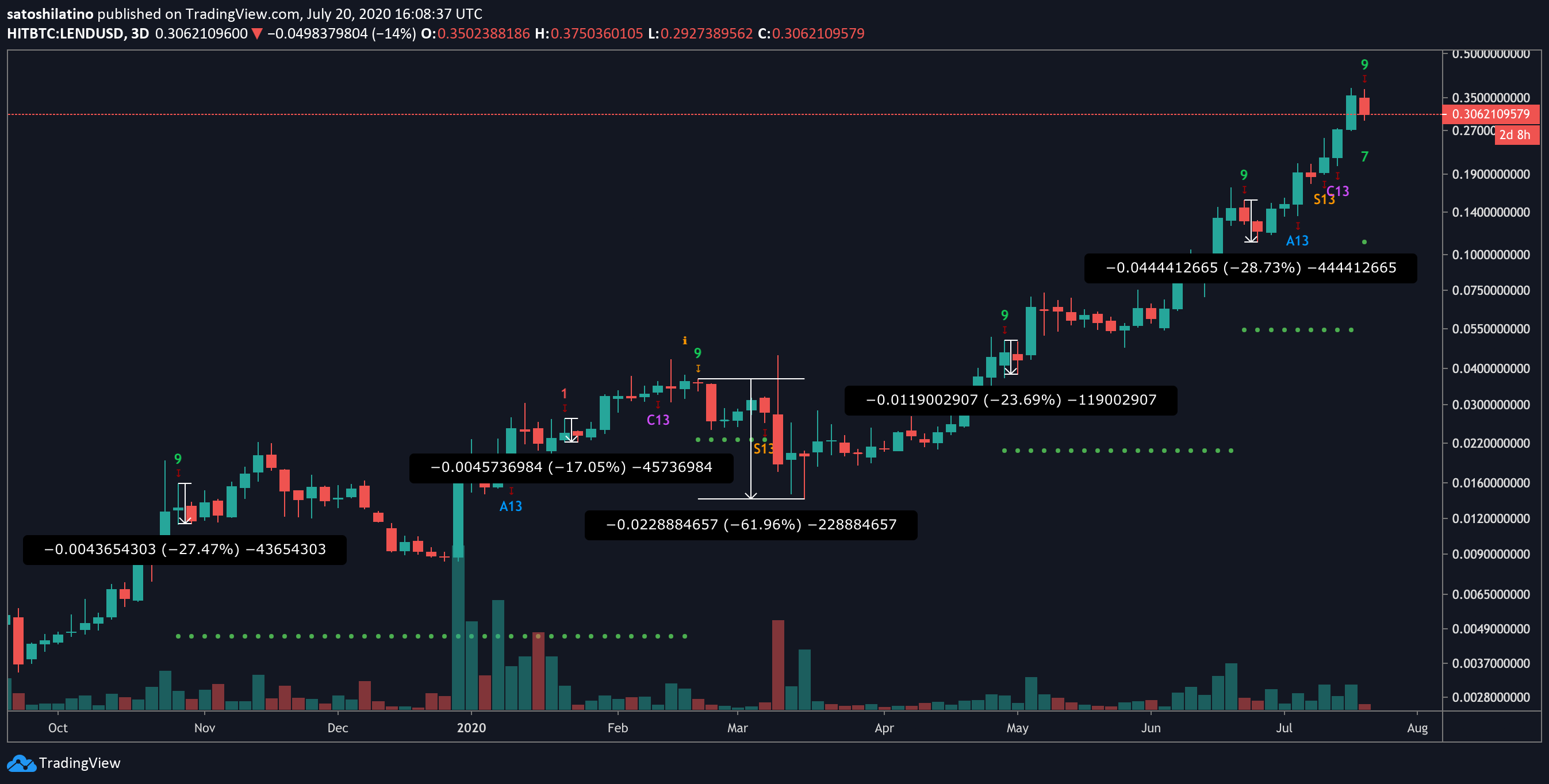 Now, this technical indicator again shows that LEND is ready to fix. The bearish formation develops as a green nine candlestick, estimating that the LEND may decline in one to four 3-day candlesticks.

Russia released the first cryptocurrency bill, removing the ban on the issuance and use of crypto