Bitcoin price continued to weaken last week as the $ 9,000 support level has been tested multiple times. However, the market itself is not taking action because the altcoins like DOGE are surging very fast.

Is the market ready for a major momentum change and a big volatile move by BTC?

Bitcoin seems to be in a somewhat precarious position, as some technical factors are currently showing that it may soon see some noticeable short-term disadvantages.

At the time of writing, Bitcoin is trading up slightly, with the current price of $ 9,148. This is the area that has been trading over the past week.

Although the selling pressure in the area between $ 9,000 has proven to be significant, the bulls continue to resist the decline below $ 9,000.

This has caused the consolidation phase of cryptocurrencies, with BTC currently ranging from $ 9,100 to $ 9,300.

The lack of direction in recent weeks has simply marked an extension of the period of macro consolidation that Bitcoin was captured in early May.

This trend may end soon. Analyst “Big Cheds” recently pointed out that Bitcoin’s Bollinger Bands are currently the tightest since October 2018.

$BTC #Bitcoin – Daily BBs have not been this tight since October of 2018 – I hope you have your popcorn ready pic.twitter.com/D7cLqmlvw5

While talking about this model, analyst “Dave the Wave” noted that he was expecting it to see a 50% Fibonacci retracement.

The analyst further explained that a retreat of 0.5 Fib means that Bitcoin is down about 30% in the USD trading pair. This means it can soon be trading at $ 7,000.

If this decline occurs, it can also create a series of liquidations that cause the price of BTC to fall even further.

XRP was the only coin to decline during the week that constituted a 2.03% decline.

Looking at the hourly chart, XRP is about to retest the $ 0.20 resistance. However, the upward momentum is unlikely to continue as it is not supported by trading volume. Moreover, it keeps going down. In this particular case, it is highly likely to see a false breakout at resistance, followed by further declines.

Looking at the daily chart, XRP is about to continue trading sideways until the end of July and early August 2020. Trading volume will not decrease; however, it still does not have enough strength to grow.

Therefore, the bulls cannot manage to escape the bearish channel, formed at the end of April 2020. Correspondingly, trading in yellow between the $ 0.19 and $ 0.1950 ranges is the most likely option for XRP.

Looking at the weekly time frame, XRP is in a sideways trend; However, trading volume continued to decline. A bearish divergence has also been formed, which means that the coin may fall. The closest support level is at $ 0.1275, where prices will sink towards by the end of the 2020 summer if the bulls fail to push the price above $ 0.20 in the short term.

Chainlink (LINK) is one of the best performing crypto assets over the past few weeks and months. Since falling to a low of less than $ 2 in March, the asset has more than quadrupled, trading as high as $ 9 earlier this week.

The strong performance of production assets comes from a wide range of fundamental developments. For example, China’s Blockchain Service Network (BSN) revealed in June that it would use Chainlink technology.

Despite this strong performance, not everyone believes LINK can continue extremely powerful protests over the past few months.

According to a chart shared by a technical analysis Telegram channel, LINK has just printed a “Sell Quasi 9” on TD Sequential. This is a technical indicator that prints “9” and “13” candles at inflection points in the trend of an asset.

This latest signal indicates that altcoins may soon see a retreat after increasing by hundreds of percent. 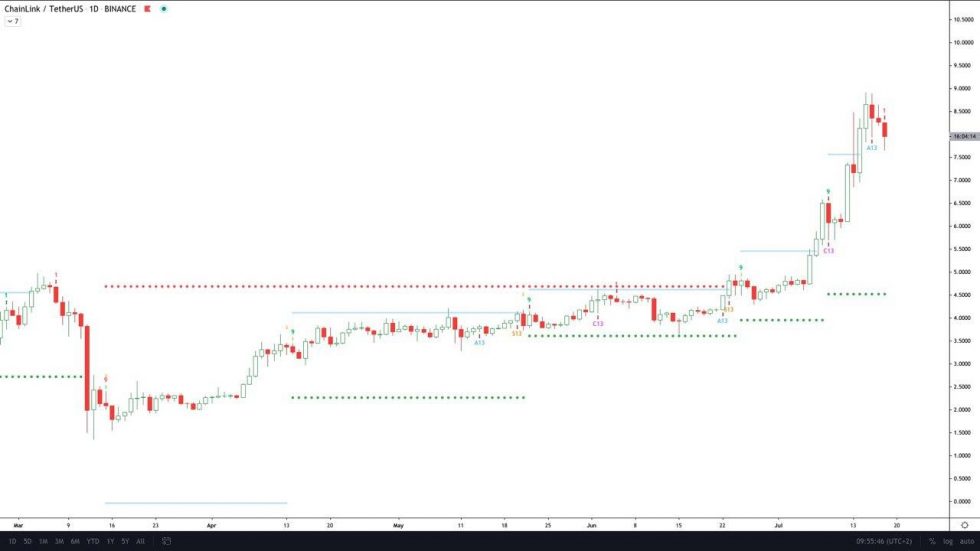 This sentiment is also repeated by others.

Trader “CryptoHamster” noted on July 16 that bearish divergences were forming while TD Sequential printed a few normal “9” candles for LINK. Another trader, “Josh Olszewicz,” added that with LINK’s RSI at all-time highs while the price nears two significant resistance levels, there could be a pullback. 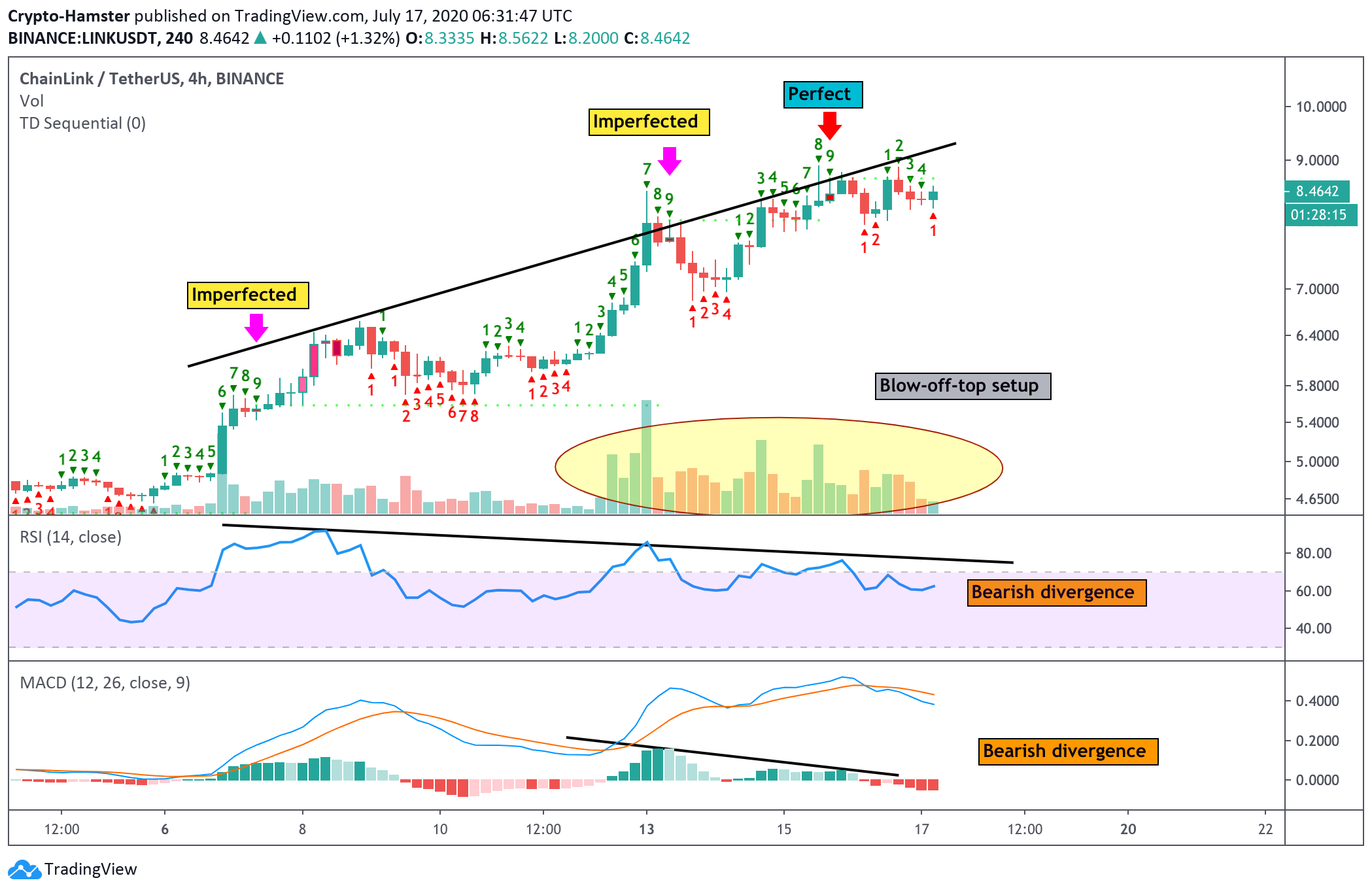 What is Aidos Kuneen (ADK)?