Crypto price analysis 7/18: Bitcoin is on the cusp of entering its next bull phase plus ETH, XRP, LINK

A recent Q2 report by Grayscale Investments shows that the company has raised $ 905 million in Bitcoin and other altcoins. In Q1 this year, capital inflows into various Grayscale products were $ 503.7 million. The sharp rise in investment suggests institutional investors are building their position when Bitcoin price is stuck in a range.

However, in the short term, the US Federal Reserve’s policy actions may impact the next directional move. Investors hope that the Fed will expand its current stimulus programs that are expected to end soon.

Any disappointment is likely to lead to a sharp decline in the stock market as investors rush to lock in their profits. Because Bitcoin’s correlation with the S&P 500 is so high, it can also follow and break from its range. Such a move could also lead to profit booking in altcoins that have outperformed Bitcoin in recent weeks.

Bitcoin’s recent price action hasn’t changed much to understand the current state of its macro trends.

BTC has mostly fluctuated between $ 9,000 and $ 10,000, with trading ranges narrowing significantly over the past few weeks as it currently trades around $ 9,100.

This has caused the volatility of cryptocurrencies to reach historic lows, seemingly indicating that a significant movement is forming.

Analyst “Bitcoin Jack” has come up with a chart showing that BTC tends to consolidate after halving, with this stage eventually leading to it entering a new parabolic cycle.

If history repeats – and there’s no guarantee it will – the cryptocurrency could be well-positioned to see some notable gains by the end of the year.

As for what could drive this parabolic-capable movement in the coming months, analyst “Cantering Clark” recently noted that Bitcoin is likely to see a “cascade” of liquidations once this trading range is broken.

“Bitcoin is so compressed that any break likely will get the dominoes falling. Even intraday stop clusters hitting should be enough to carry into the longer-term position areas to get the cascade going.”

Accordingly, the bulls have to gain control of cryptocurrencies in the near future because an upward breakout can create a large stream of liquidation of the sellers helping to push the price of Bitcoin higher.

ETH has closely monitored Bitcoin price action, which is the main reason why it is currently trading at a lower level in its trading range of between $ 230 and $ 250.

The seller tried to pin ETH below his short-term support level, but the buying pressure established here has proven to be quite significant.

Its next trend may depend largely on whether the buyer can begin to push it back to the top of its range.

Because it has formed a prominent correlation with Bitcoin in the past few weeks, Bitcoin price action will also affect it.

Analyst “Wolf” recently explained that ETH is on track to confirm a bullish technical model, and also allow it to see some serious downsides in the coming weeks.

He noted that the inverse head and shoulders pattern is forming on the weekly chart. A clear confirmation of this model may be enough to bring ETH to new yearly highs. 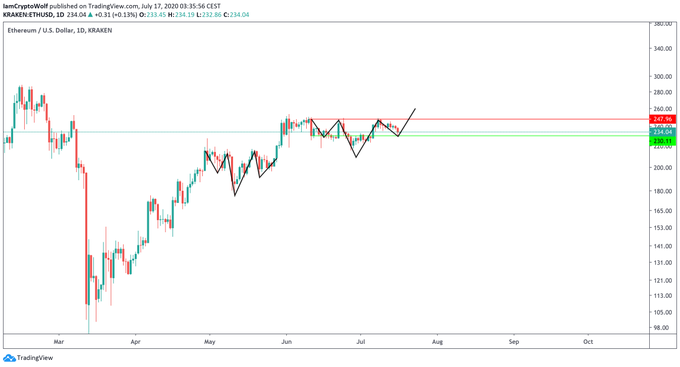 The continued growth seen by the DeFi industry could also begin to have tangible effects on ETH price action.

XRP hasn’t had the best year yet. Starting the year in good spirits with some upbeat price action, it was soon overshadowed by ETH and BTC. Even if BTC lost 50% of its value and started the second quarter of 2020 in recovery mode, XRP did not work well.

The short-term XRP price outlook is not bright. It dropped to as low as $ 0.188 on July 16, a rebound is underway, but it is unlikely to push the price as high as $ 0.21 at the beginning of last week. Since breaking out of the wedge dropped on July 16 when the price dropped from $ 0.197 to $ 0.185, the altcoin is currently trending with an ascending triangle.

Resistance levels have pushed price downwards of $ 0.197, $ 0.198, and $ 0.199, respectively, but the current trading price of $ 0.194 is still very far away, and the triangle will prevent every move on the base. The current trading volume for XRP has also decreased over the past few days.

XRP is unlikely to move above the aforementioned resistance levels, especially if the volume decreases, and the CMF decreases. If there is a breakout above $ 0.195, XRP is unlikely to rise as high as $ 0.208, the highest resistance level in the short term. A push down will result in more movement between the support at $ 0.197 to $ 0.204 and form a broad reversal head and shoulders, with the head at the $ 0.189 low.

Sharing the LINK / BTC chart, he wrote: “I don’t wanna be THAT GUY, but LINK might be overbought here.” The analyst gives four technical signals to support his position:

What is Haven Protocol (XHV)?