Veteran trader Peter Brandt believes that a new altcoin season will probably begin in the near future and he predicts that altcoins are likely to outperform Bitcoin (BTC) in this next run. In the short term, altcoins can start a rally without the support of Bitcoin but in the long-term, it is unlikely that altcoins will rise in price if Bitcoin struggles to go up.

On July 9, the S&P 500 corrected and that led to a drop in Bitcoin, which showed that the correlation between the two was still intact. When Bitcoin broke below $ 9,200, it drew in profits from altcoins and pulled their prices lower.

After trying to rise past $ 9,500 this week, Bitcoin was unable to sustain its momentum again. Currently, BTC is trading at $ 9,245.

The noticeable pullback is not caused by Bitcoin but from the S&P 500 decline on Wednesday.

Despite the power seen in recent months, Bitcoin is still in the macro consolidation model.

Trader “Michael’s Trading Journal” shared the chart below that shows BTC is consolidating at the cross-resistance formed at the all-time high of $ 20,000. Bitcoin is also trading below the $ 10,500 horizontal resistance, which has been an important level for over a year now.

Bitcoin failing to surpass these two critical levels could lead to a pullback.

“Where are we? What’s going on? (1) Weekly. Consolidating at resistance. Until horizontal & diagonal resistance is broken, a drop to the 8ks at least & 7k is logical Can stay in this weekly triangle until Q2 2021.” 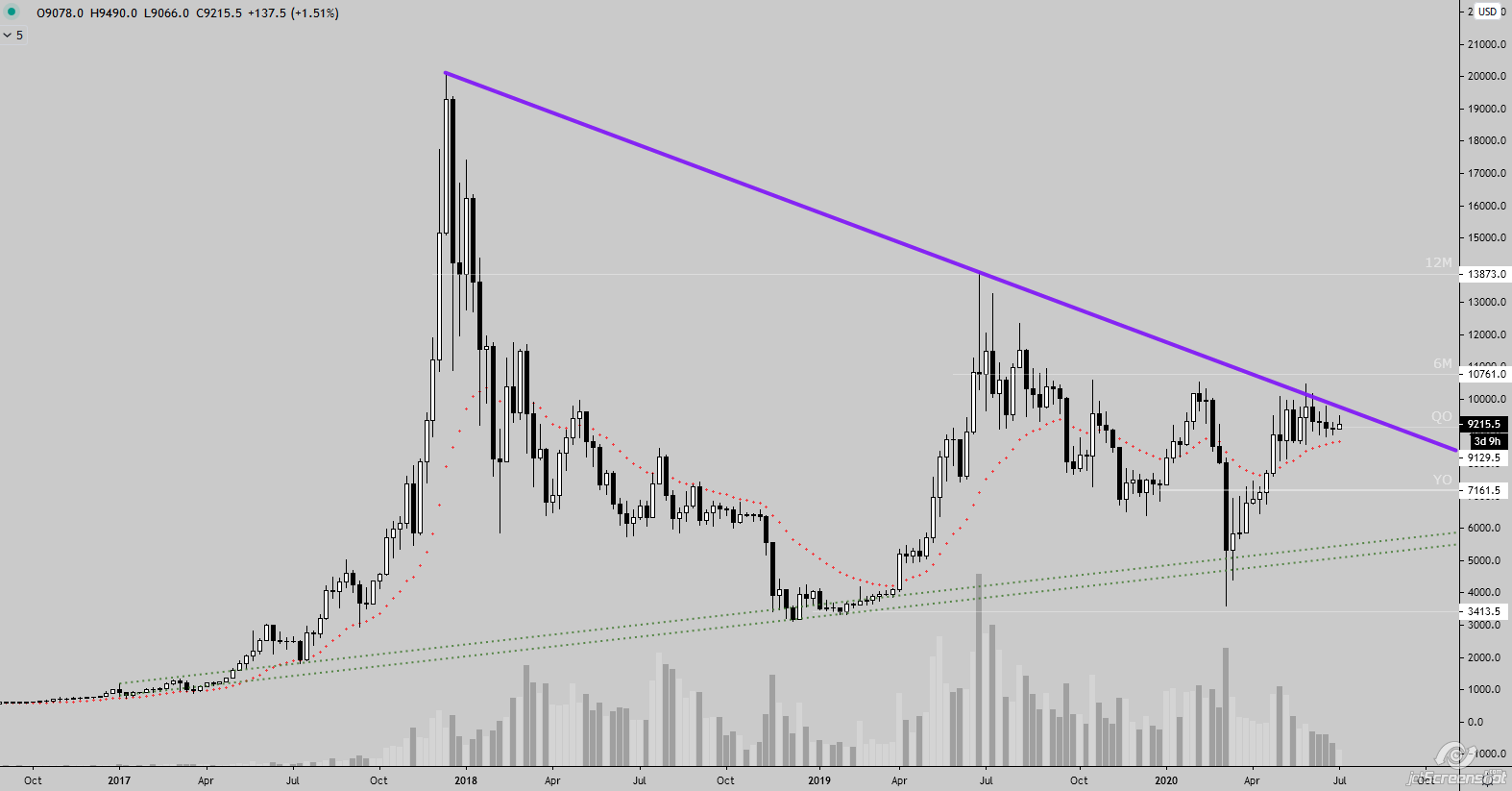 Another analyst made a similar observation, saying that the bear case is expected to cause BTC to drop below $ 7,000.

The trader said that Bitcoin’s recent price action looks similar to the discount scheme shared by the late technical analyst Richard Wyckoff. If BTC follows the diagram, it will likely trade below $ 7,000.

“A couple more clues developing that lend themselves to HTF distribution. 1. Rising Demand on the verge of failing. 2. Side by side, ascent vs descent with selling the dominant pressure from volume.”

Stellar (XLM) has given rise to a significant price increase over the past few weeks, with the price rising to new yearly highs just days ago.

However, it is currently showing some signs of weakness in the face of grim rejection that has caused a sharp decline in price.

Analysts noted that this persistent event could eventually result in a complete retreat that would get it back around its latest parabolic start.

Analyst “Josh Rager” noted that XLM seems to be showing some signs of breaking after its rejection at recent highs.

“XLM: Looks like the breakdown is the name of the game right now for many altcoins. I had high hopes for Stellar too, as there was a real opportunity to hit 50% to 70% if Bitcoin continued trending up. XLM needs to hold this level, as it could head back down between 825 to 860 sats.”

IOTA price is currently trading in the resistance zone of $ 0.245. This area is extremely important as it plays a supporting role for much of 2019 before the price finally breaks down. Therefore, an increase above this level may cause the continuation of the current bullish move at an accelerating pace.

Before starting the current bullish movement, IOTA has created some bullish divergences in the weekly RSI.

However, the weekly candle is currently forming a shooting star, as the long upper shadow penetrates this resistance. If the price doesn’t close above, that could be a strong sign that the uptrend has ended and IOTA has begun to correct. 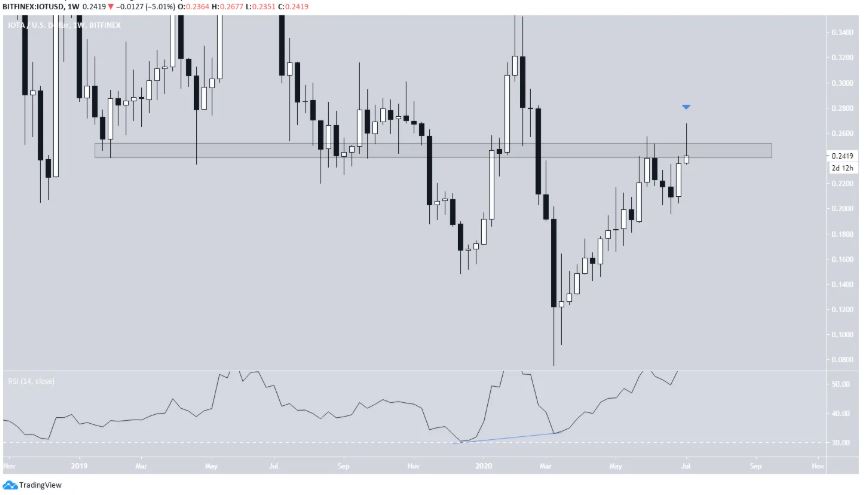 The daily chart seems to fall further. Price has created a two-headed pattern, which is combined with bearish divergence. Moreover, the second bottom has an evening star pattern, which is itself another discount.

Although the price is still trading above the 200-day moving average (MA), a fall below the level can trigger a quick downward movement, with a possible rebound at $ 0.21. If the price drops the entire height of the sample, it can drop to $ 0.154. 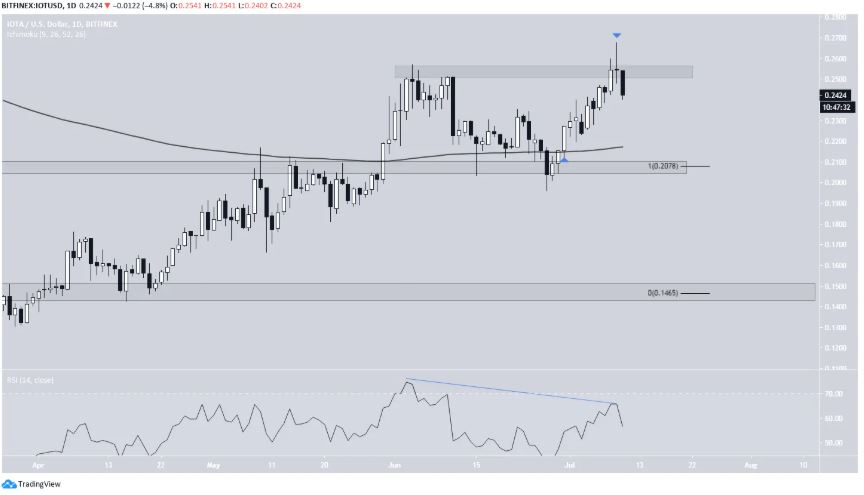 The digital currency soared to $ 6.50 before facing some rejection that caused a slight sell-off, although it is currently in the process of returning to this high.

Data from Glassnode reveals that the top one percent of LINK addresses now hold nearly 77% of token supply.

While looking towards the chart seen below, it seems the top addresses have increased their visibility at a rapid rate over the past few weeks. 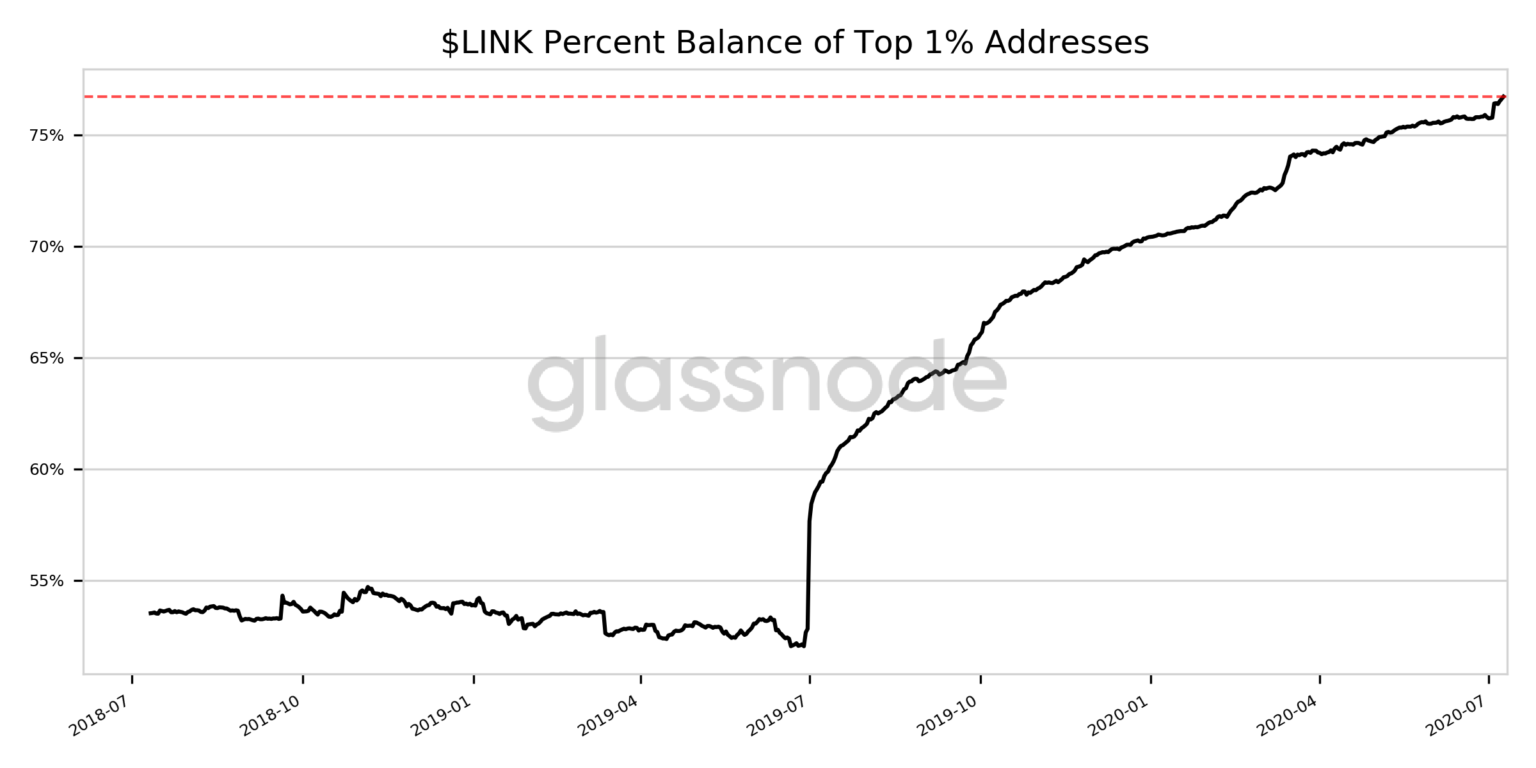 The Chainlink gains posted over the past week also seem to be driven in part by a boom in network activity.

Santiment talked about this in a recent post, explaining that LINK saw some of its highest network activity outputs in the past week. 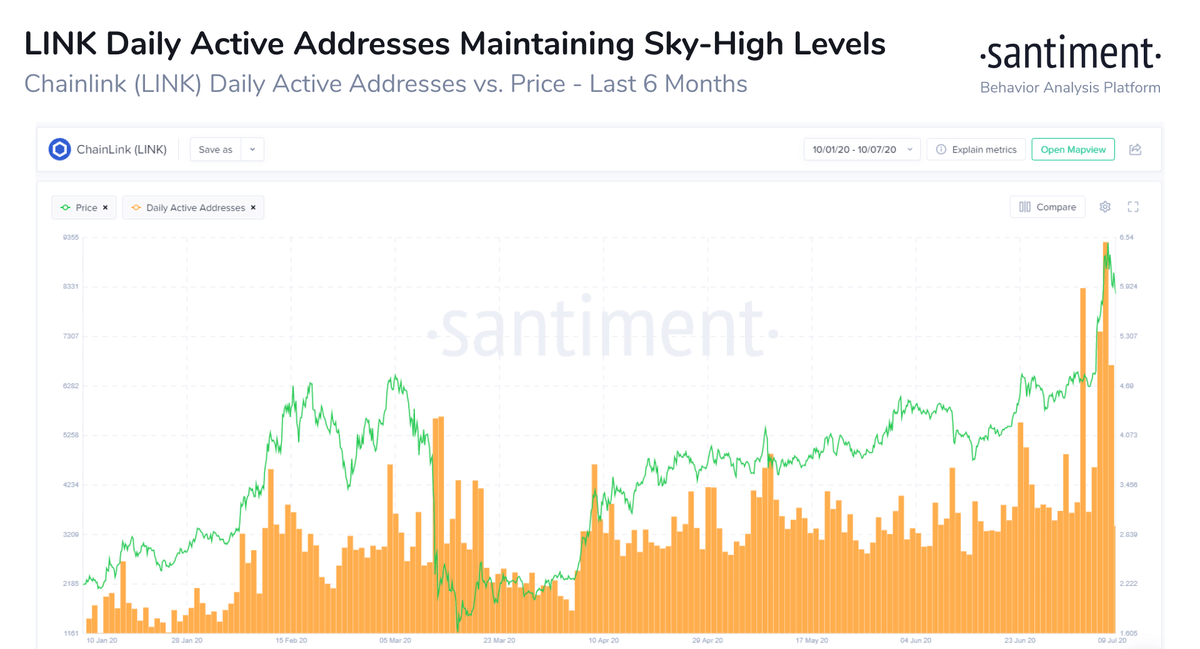