Bitcoin may be struggling to reach $ 10,000, but its progress is on the right track.

Adding the latest update on July 1, PlanB, the stock-to-flow model maker, shows that Bitcoin is operating precisely as its historical price-raising needs are.

When Bitcoin was hovering near $ 9,100, one of its old fractals was pointing to an official breakthrough towards $ 70,000 or more.

First discovered by Artem Shevelev, a market analyst on TradingView, the model shows Bitcoin in a seven-stage growth period. So it looks like, the cryptocurrency that ran to an all-time high of nearly $ 20,000 in December 2017 succeeded six steps, each of which involved specific price moves and indices.

Shevelev noted that Bitcoin had formed a similar pattern since 2017. It is trading inside the giant symmetrical triangle while going through stages, including medium-sized increase/decrease triangles, called flat zones, inverted triangles, and sudden crashes.

The chart above shows the strangely identical nature between the two samples. If correct, Bitcoin is currently in the penultimate phase before it tries to break out of the giant symmetrical Triangle.

In his chart, Shevelev envisioned the price rising at an extremely high rate as in 2017. Earlier, the rally took cues from emerging ICO excitement. Traders require more Bitcoin so they can exchange it with promising start-up tokens. 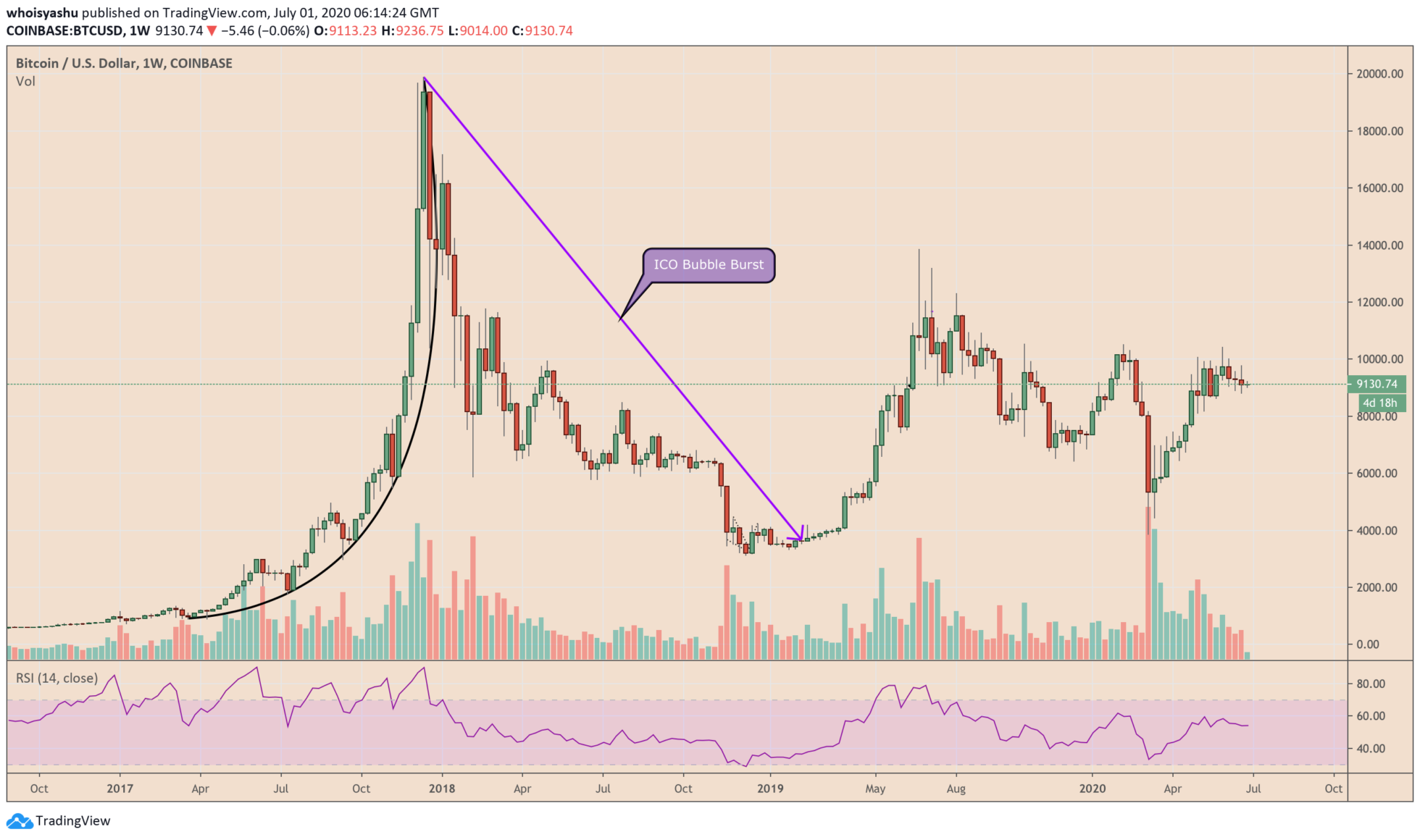 “So, after breaking out of resistance in early 2017, the price of Bitcoin began to rise,” Shevelev said.

“And after crossing, previous highs, [the] market flooded with new traders and fresh money. [It] caused insane growth of the price for about 357 days. [But] will this phase repeats after we cross 20k again? This is [a] topic for [discussion].”

Shevelev’s chart sees Bitcoin rising to $70,000 but does not mention the source of the cryptocurrency’s next massive funding. That makes it more dependent on institutions like hedge and pensions funds, family offices, and others.

Recently, the Ethereum price made another attempt to overcome resistance at $ 228 and $ 230. ETH price could not continue higher and formed a high swing near $ 230.

It seems that there is a decisive ascending channel forming with support near $ 224 on the hourly chart of ETH / USD. The first major resistance is near the $ 228 level, followed by the extremely important $ 230 level. A successful close above the $ 230 resistance level could trigger a new rally above $ 232 and $ 235.

A successful daily close above $ 0.18 and a 100-hour SMA could create a new rally in the coming sessions.

Tether’s market cap officially reached $ 10 billion on June 30. At the beginning of the year, the market capitalization of the assets was nearly 4.5 billion dollars. And in early 2019, the figure was less than $ 3 billion.

Some see USDT’s market cap growth as a sign of growing interest in cryptocurrencies.

Because USDT can easily be traded into Bitcoin, Ethereum, and other coins, large companies/traders can theoretically mint their assets through Tether. They can then deposit the money to the exchange to get the property.

Compound is an Ethereum-based protocol that allows investors to borrow and make money by lending cryptocurrencies. The platform supports assets from Ethereum and BAT to stablecoins like DAI and USDT.

USDT has quickly become one of the most popular currencies on the platform. Last week, Compound reported that more than 150 million USDT dollars were deposited in the protocol.

With the new capitalization milestone, Tether further strengthens the top 3 when it is more than $ 2 billion away from XRP’s market cap.

Glassnode report: The number of Bitcoin whales has been rocketing higher since the start of 2019