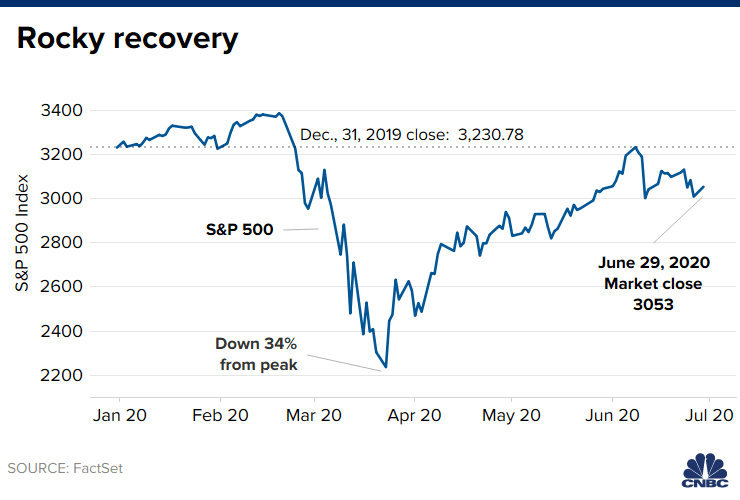 On Monday, the Dow climbed 580 points, helped by a 14.4% gain in Boeing’s stock, as certification flights for the Boeing 737 Max began Monday. The S&P 500 also registered a gain, climbing 1.5%. Monday’s gains brought the 500-stock index into positive territory for the volatile month of June.

AZCoin News has reported some analysts have suggested that Bitcoin is still somewhat or strongly correlated with traditional markets like the S&P 500. Any crash affecting stocks or traditional assets could still cause the crypto market to go to the bears, as they did during the March bloodbath.

Yesterday, bitcoin started a decent recovery wave from the $8,813 swing low against the US Dollar. BTC climbed above the $9,000 pivot level to move into a short term positive zone.

The recovery wave such that the price was able to settle above $9,100 and the 100 hourly simple moving average. Moreover, there was a break above a crucial bearish trend line with resistance near $9,170 on the hourly chart of the BTC/USD pair.

However, the price is lacking momentum above the $9,200 resistance level. It is currently consolidating near the broken trend line at $9,170. An initial support is near the 23.6% Fib retracement level of the upward move from the $8,813 low to $9,226 high.

In the past few sessions, Ethereum price started a steady rise above the $220 level against the US Dollar. ETH price managed to recover above the $225 resistance level and the 100 hourly simple moving average.

However, the price failed to gain momentum above the $228 and $230 resistance levels. A high is formed near $230 and ether is currently correcting lower. It traded below the $228 level and the 100 hourly SMA.

An immediate support could be $225 since it is close to the 50% Fib retracement level of the recent wave from the $221 low to $230 high. There is also a crucial ascending channel forming with support near $224 on the hourly chart of ETH/USD.

The channel support is close to the 61.8% Fib retracement level of the recent wave from the $221 low to $230 high. On the upside, the price is clearly struggling to clear the $228 and $230 resistance levels.

If ether price settles above the $230 resistance level, there are high chances of a sustained upward move. The next major resistance is near the $235 level, above which it could revisit the $250 resistance.

This past week, bitcoin cash price broke the main $225 support level to start a sharp decline. BCH even traded below the $215 support level and settled well below the 100 simple moving average (4-hours).

It tested the $205 support and remained well bid above the $200 handle. As a result, the price started an upside correction above the $215 and $220 levels. It is now trading near a major resistance at $225 (the recent breakdown zone).

The 50% Fib retracement level of the downward move from the $245 swing high to $205 low is also acting as a resistance near $225. More importantly, there is a crucial bearish trend line forming with resistance near $230 on the 4-hours chart of the BCH/USD pair.

The trend line is close to the 100 simple moving average (4-hours) and the 61.8% Fib retracement level of the downward move from the $245 swing high to $205 low. Therefore, the bulls need to clear the $225 and $230 resistance levels to start a steady increase.

If they succeed and the price settles above $230, there could be a decent upward move towards the $245 resistance level in the coming sessions.

At the time of writing, Cardano is trading up 3.5 percent at its current price of $0.085. This marks a notable climb from daily lows of $0.081 that it set earlier this morning.

This past Saturday, ADA’s price took a major hit as the entire crypto market began reeling lower. It fell as low as $0.076 before buyers were able to step up and slow the decline.

In the time since it has been marching higher and is beginning to face some resistance around $0.084.

This price has proven to be a powerful resistance level over the past few weeks, and it does appear that this is the only thing stopping it from reaching its year-to-date highs of $0.089.

While pointing to this crucial resistance, one pseudonymous analyst who goes by the name “Bagsy” explained that it is “time to pay attention” to Cardano, as a firm break above this level would be technically significant. 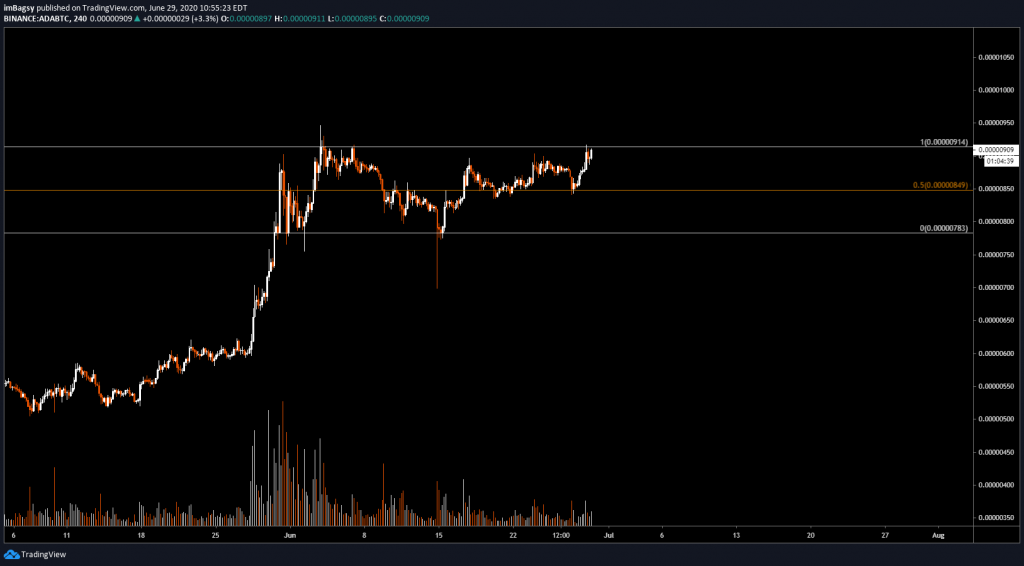 If this level is broken, there is a good chance that buyers will then target a move to $0.09, where its all-time highs currently sit.

Bitcoin had a nearly 3,500% return on investment since 2015, 70 times higher of five traditional stock markets