For a brief period of time yesterday, it seems that Bitcoin is implementing a trend-defining movement that will mark a solution to the prolonged sideways trading period that cryptocurrencies have faced over the past few weeks.

Its volatility has now dropped to annual lows, which tend to occur before it creates a major movement.

This indicates that the cryptocurrency market may see some big fluctuations over the next few days – potentially setting the tone for BTC and other altcoins to trend throughout the rest of the year.

Bitcoin is trending inside a Falling Wedge, a pattern that develops following a downward price trend while leaving a chain of lower lows and lower highs behind. Meanwhile, the short-term moving averages (MAs) of the cryptocurrency have formed a Death Cross. 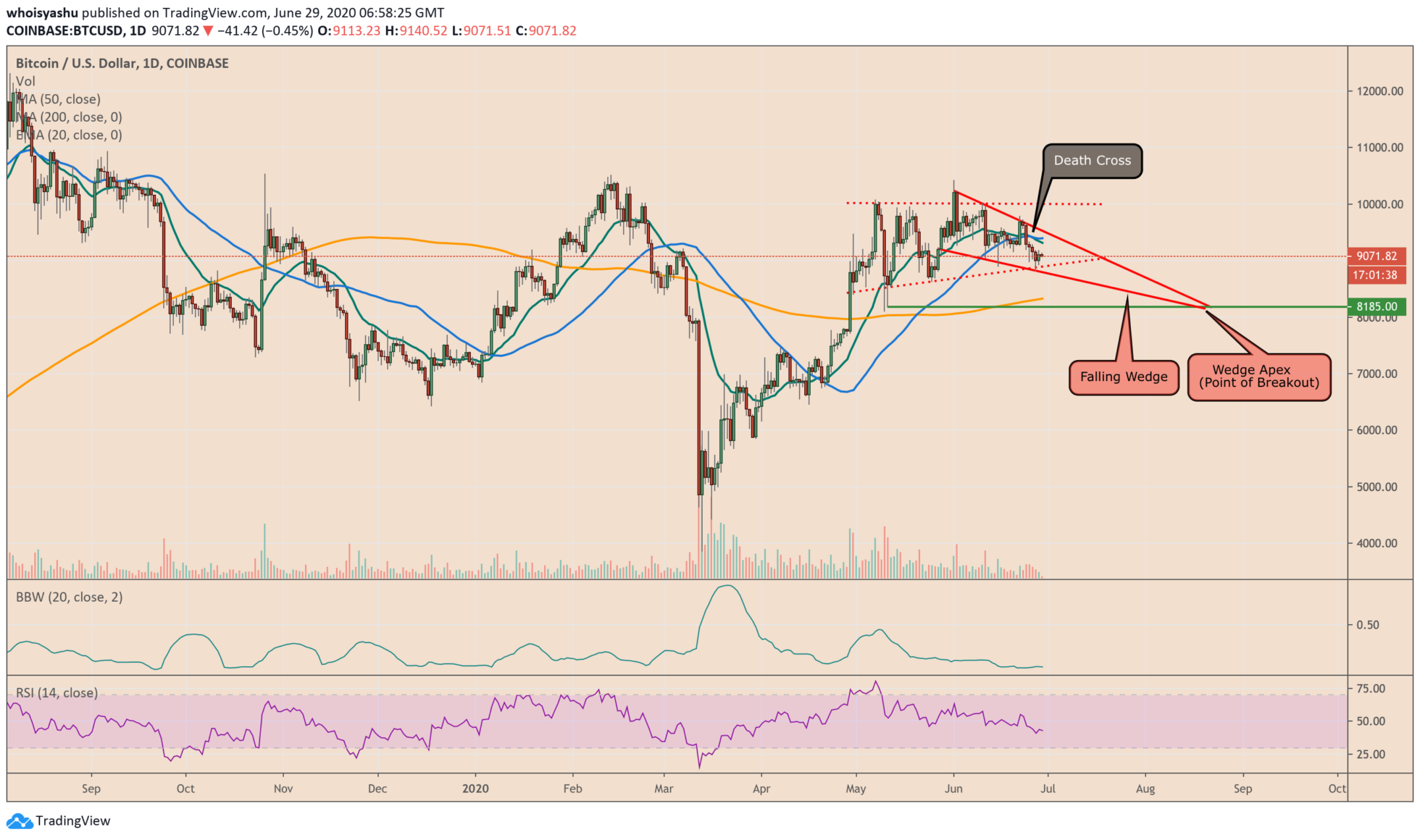 On June 26, the 50-day SMA crossed the 20-day EMA. Traders often see the crossover as a sign of an immediate sell-off. Part of the reason is that the historical accuracy of the model has been a factor in forecasting price declines.

In March 2020, the 50-20 crossover caused the cryptocurrency to plunge by more than 50%. Similarly, its appearance in November 2019 caused Bitcoin to correct by about 20%.

The current fractal shows Death Cross complimenting the Falling Wedge structure. The Falling Wedge is a bullish indicator that requires an asset to trend lower before attempting to overcome the uptrend. Those who follow the chart can use the Death Cross as a suggestion to move price lower towards the top of the Wedge.

That apex, likely to mature in August 2020, is just near $ 8,200, a strong support level to overcome Bitcoin price reduction efforts in May 2020.

The $ 8,200 level is also close to the 200-DMA cryptocurrency. The orange wave, as shown in the chart above, has also acted as a support level for recent bulls.

If the confluence holds, then the Bitcoin price will drop to $ 8,200 while maintaining the Wedge range.

Price was able to climb above the $ 220 and $ 222 resistance levels. However, ETH appears to be facing an important resistance near the $ 228 and 100-hour SMA levels. There is also a large bearish trend line forming with resistance near $ 226 on the hourly chart of ETH / USD.

The pair is currently consolidating near the Fib 23.6% retracement of the recent rally from the $216 low to $228 high. The initial support is near the $ 222 level (recent breakout area).

Over the past week, the price of XRP has extended its fall below the support of $ 0.19. XRP has broken many key supports near $ 0.188 to move further into the bearish zone.

The price even soared above the 50% Fib retracement level of the decline from the $0.1866 high to $0.169 low. However, the previous support level of nearly $ 0.18 is now acting as a strong resistance for the bulls.

Cardano (ADA) is one of the hottest cryptocurrencies throughout 2020. The increased usage rate and remarkable development process have helped fuel this upward trend, allowing the altcoin to rally more than 270% from the low in March.

There are several important factors that can influence its trend over the next few days and weeks.

Data from Messari sheds light on this trend, showing that ADA is followed by Ethereum in second place and Vechain in third place.

While the price is not a direct reflection on basic utility, usage, or outlook, Cardano has advanced thanks to advances in all of these fronts – mainly due to Shelley’s progress in development.

In the short term, the growth of ADA may be hindered by the great resistance it is advancing very quickly.

In / Out of the Money data from IntoTheBlock shows that the price area between $ 0.08 and $ 0.09 may not be able to breakthrough in the near term. 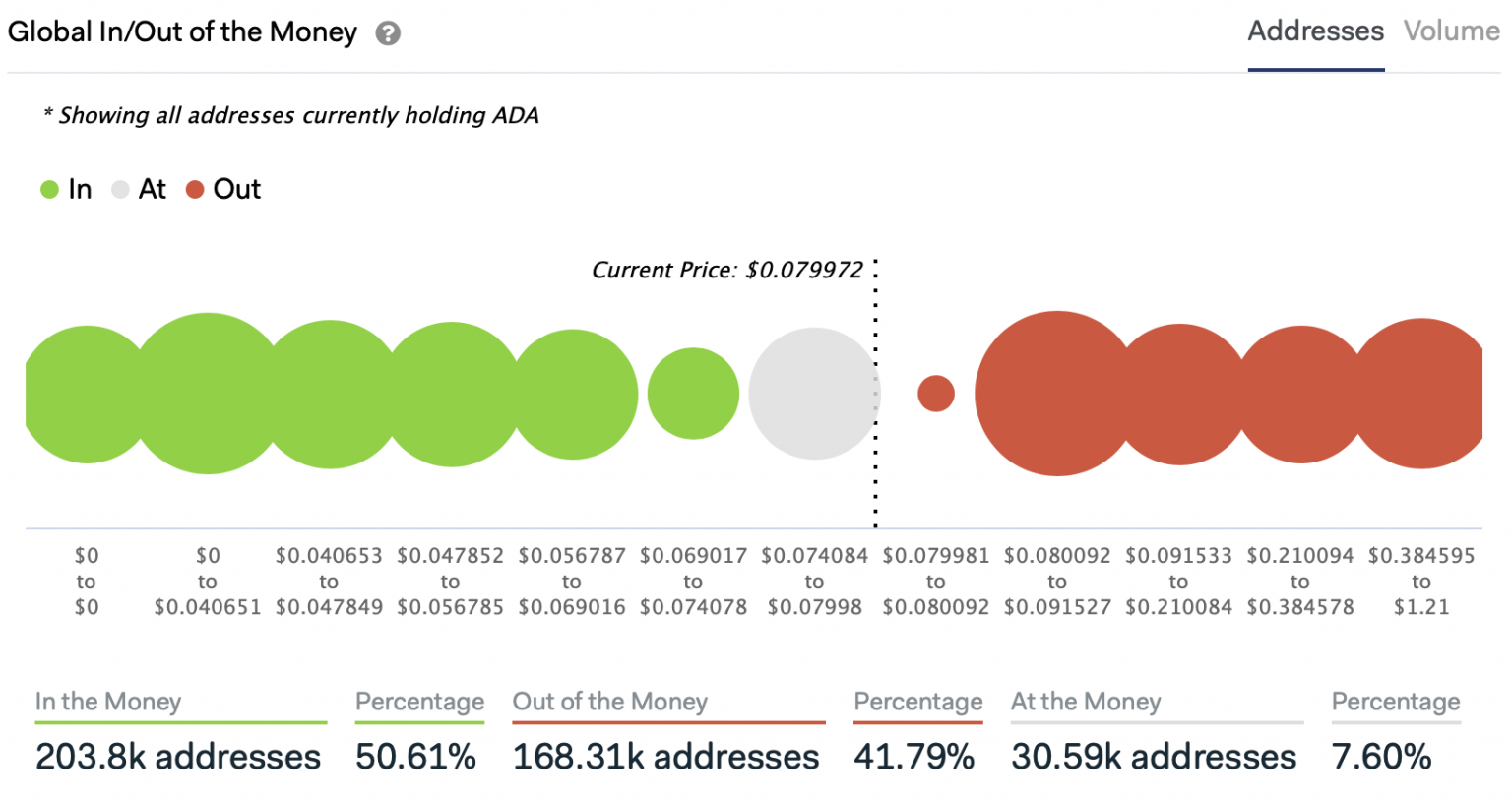 It seems that major investors are paying attention to the impending resistance of the cryptocurrency, as its large number of transactions has been decreasing recently. 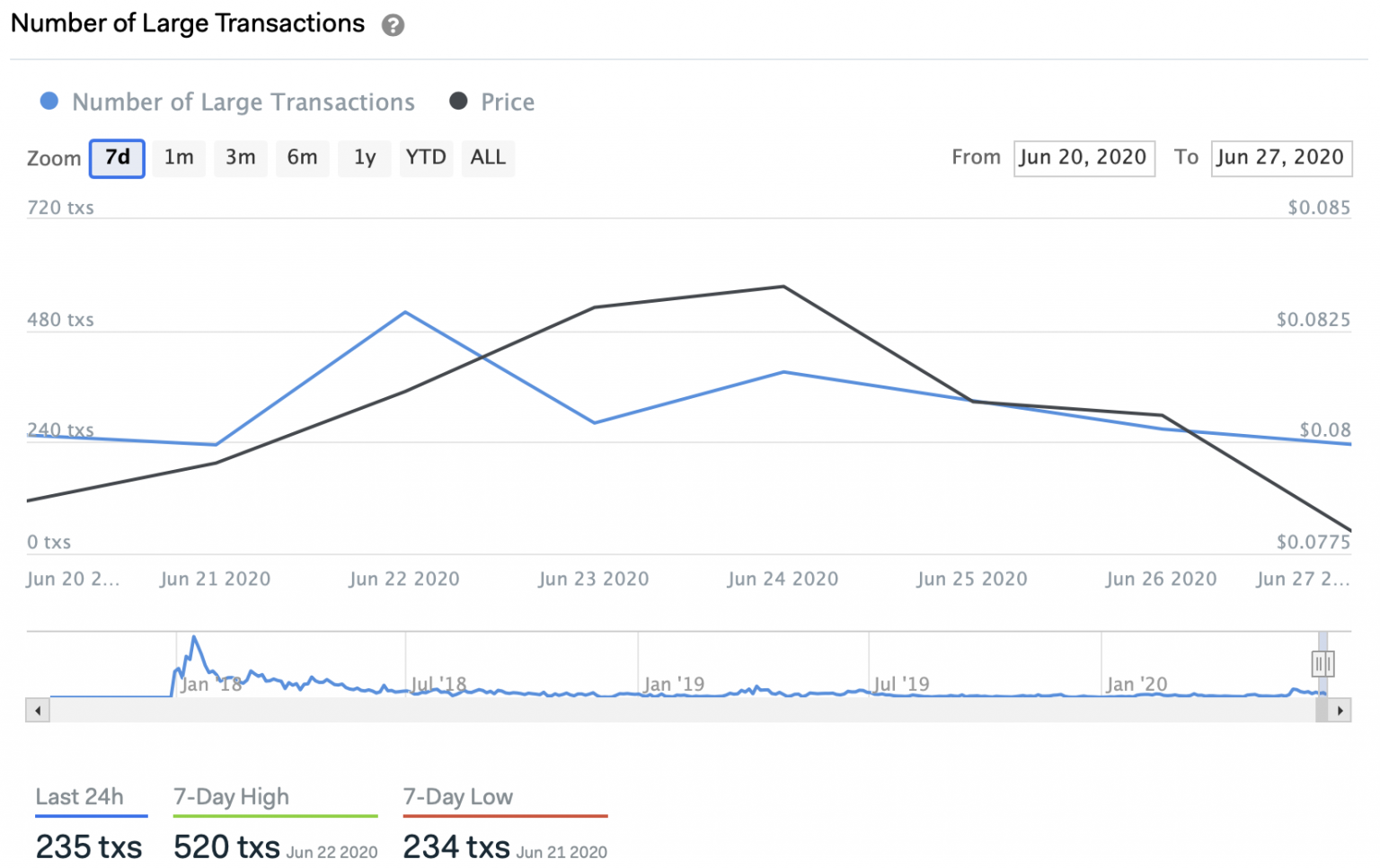 This massive drop in ADA tx volume signals that large traders are sidelined as the cryptocurrency approaches a heavy resistance level, which could signal that it will prove insurmountable.

Ripple CTO David Schwartz denying his involvement in Bitcoin creation, is that true?