A bearish stock market is currently appearing badly for Bitcoin.

The correlation comes after the growing proximity of the S&P 500 to BTC since March 2020. Data on Skew shows that the correlation for a month between the two markets has increased to 43.1%, the highest in more than a year.

The moves in Bitcoin and S&P 500 are almost identical this week. The founder of market analysis firm Ronnie Moas Standpoint Research called it a near 1: 1 correlation.

The Stochastic Relative Strength Index (Stochastic RSI) has long been a leading signal in technical analysis. It gives traders an idea of ​​whether the current value of RSI is overbought or oversold.

This indicator is quite accurate in predicting Bitcoin Bitcoin price action over the past few years. The one-week Stochastic RSI had flipped bearish just one or two weeks after peaking at $ 14,000 in 2019, predicting a 60% collapse ensuing.

Analyst “JB” has observed that Stochastic RSI over 12 hours, one day, two days and three days are bullish:

12h, 1D, 2D and 3D are over-sold and look like they want to reverse while monthly also is turning bullish!

Only weekly is over-bought but not pinned to the top yet. pic.twitter.com/SiF6wAqDOV

The three-day Stochastic RSI is especially important as a bullish cross was last seen after the fall of March to $ 3,700. Another one of these crosses is about to take place.

The analyst also shared the chart below to reinforce the bullish case.

Accordingly, Bitcoin is likely to re-accumulate Wyckoff rather than distribute Wyckoff. The Wyckoff re-accumulation scenario will mean that BTC is about to enter another uptrend. It will likely bring BTC towards $ 12,000 and go beyond considering consolidation rates in recent weeks.

Yesterday the buyer reinstated ETH price from the low to the resistance zone of $ 233.33. During the day, the pair tried to gain a foothold above this resistance, but the buying volume was below the average and the price could not test the two-hour EMA55.

Today, the price could fall back to yesterday’s low, and if the bears increase the pressure, the fall will continue to support at 100% Fib ($ 222). If there is no strong pressure, then buyers will try to gain a foothold at the average price.

Yesterday’s price recovery of XRP was capped at $ 0.184. During the day, the pair consolidated in a narrow range of sides with support at $ 0.181. 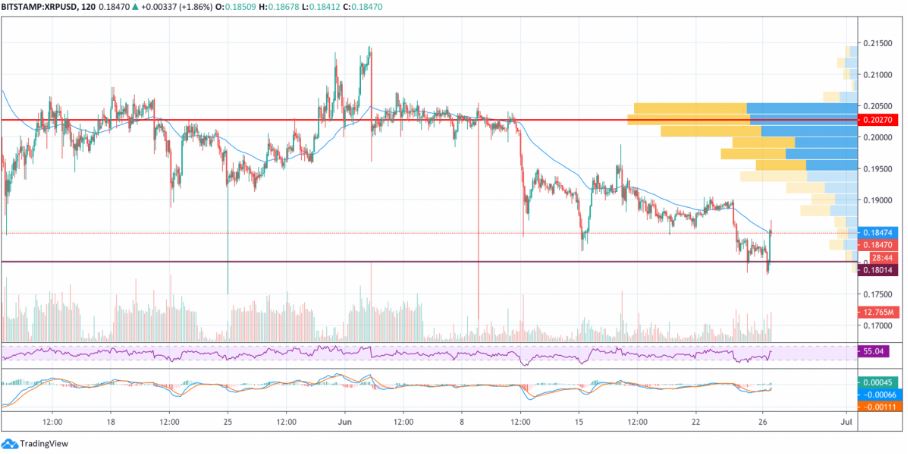 If the bulls fail to recover the pair above today’s average, the decline will continue yesterday’s lows and with strong bears from the bears, the price can test support at $ 0.17.

Bitcoin Cash has been low after plummeting on June 24. Although the altcoin remain fairly stable throughout the year and can even recover along with other altcoins, subsequent market bouts soon dragged it down to $ 230.6.

Any potential price hike will now depend on the possibility that Bitcoin violates its key levels and climbs to $ 10,000.

BCH has been trading close to the critical support level, preventing any further declines. However, the daily moving averages are beneficial for the bears. 50 DMA [Pink] was hovering above the candlestick price after fixing the downside a few days ago. Moreover, 100 DMA [Blue], recently approached 50 DMA for a discount. Besides, both DMAs continue to resist any significant price increases for the coin.

The RSI has been rejected by the 50-day moving average for the past week, around which the coin price has fallen.

BSV has dropped below $ 170 in the past 24 hours to $ 168 at the time of this writing. The market seems to have dropped in general, but BSV seems to keep moving sideways for a long time.

Although the BSV has dropped over the past day, the long-term chart of the asset shows that the strong consolidation between the $ 218 and $ 164 range has been sustained since April 3. On April 8, BSV’s price peaked at $ 218 after the March crash and has remained below $ 218 since then.

Currently, a declining wedge pattern suggests that BSV can register a rally but is unlikely to break through immediate resistance at $ 198. One of the main indicators at this resistance is 200 MA that is hindering altcoin.

Bitcoin SV will likely undergo a rally in mid-July, which could reach $ 198 but breaking the area above $ 198 is not easy.

It can also be determined that a trend reversal of 200 MA could have occurred due to the price breakout that occurred on June 11. A negative pullback from a descending triangle leads to Bitcoin SV falling below $ 184 and the asset still below the 0.786 Fib level.

From the chart above, the BSV is also likely to retest at $ 155, but because the support at $ 164 is very strong, the asset may be able to sustain above the range.

Debit cards of Crypto.com and TenX customers been frozen for use in the UK and Europe because of Wirecard scandal

PlusToken moved $186 million worth of Ethereum, leading investors to fear a dump in ETH price