The United States is only at the beginning stages of reopening its struggling economy. Stimulus and money printing left, and right has kept the economy and stock markets afloat. But it can’t save the health care system nor can it fight a virus.

With fear returning, cases rising, and all that uncertainty looming over markets, another crash could be ahead.

The last crash came about when markets first learned of the potential impact the pandemic was going to have. With another wave of the virus starting, another wave of selling is likely.

The $ 1 billion Bitcoin options contract scheduled to expire today has brought both excitement and anxiety to traders as the price that has fluctuated without a clear trend in the past 30 days.

Some analysts believe today’s expiration will help end the range of transactions for months and provide some much-needed momentum for Bitcoin. Although this assumption is reasonable, one trader recently believed that the decline seen yesterday was a movement caused by options. As such, Bitcoin may continue to prolong its tedious consolidation in the coming days and weeks.

On June 25, Bitcoin continued to decline from the previous day, falling to the $ 9,009 low. However, the price was quickly pushed up, and the price closed at $ 9,249, creating a long lower wick and a hammer candlestick.

Price is still trading in a significant support area, from which a rebound is expected.

A hammer candlestick is often considered to be bullish, especially when it follows a downward move. The price has also bounced above the 50-day moving average (MA), and the ascending support line has been in effect since May 1. 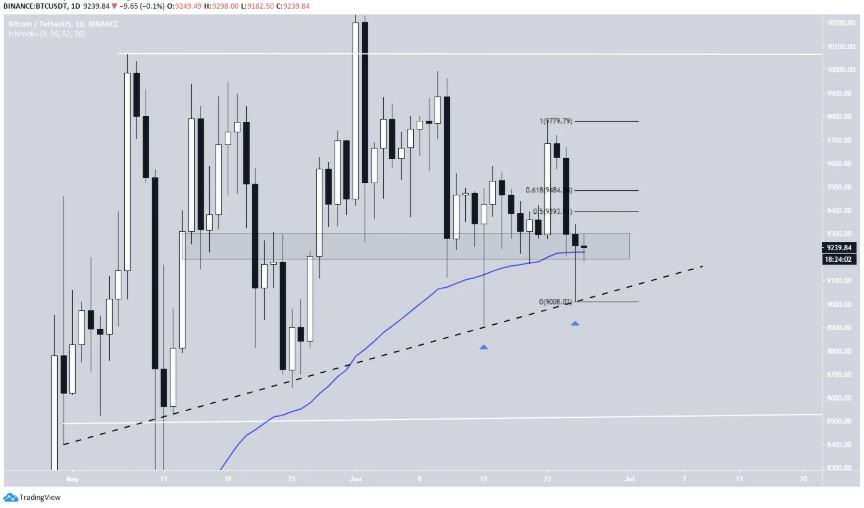 In the short term, the price has shown considerable buying pressure in the form of a long lower wick on June 25 and a bullish hammer on June 26. It is currently attempting to break out of the minor resistance zone of $ 9,300, and the RSI indicates it will succeed in doing so.

If it breaks out, BTC is likely to rally towards the above-mentioned resistance area. 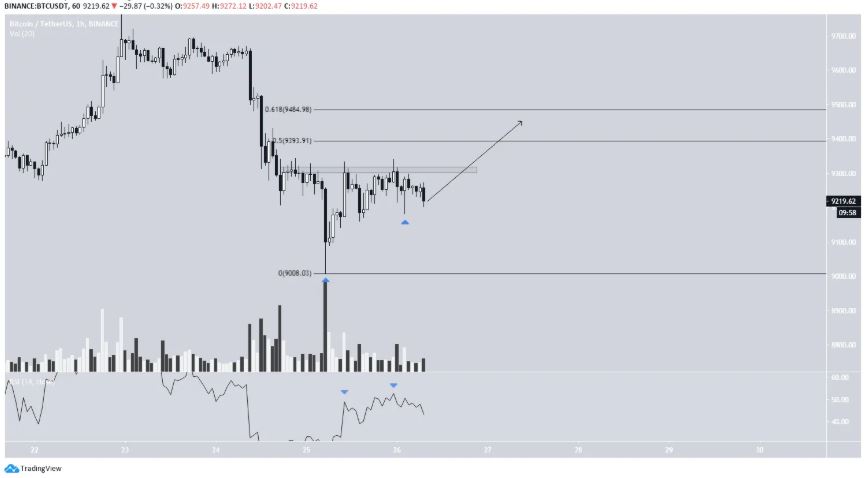 Moreover, the price can trade inside a symmetrical triangle. A breakout or a break from this triangle will determine whether it heads to the low or high range at $ 8,500 or $ 10,050, respectively. The resistance and support lines of the triangle are currently at $ 9,500 and $ 9,000, respectively. 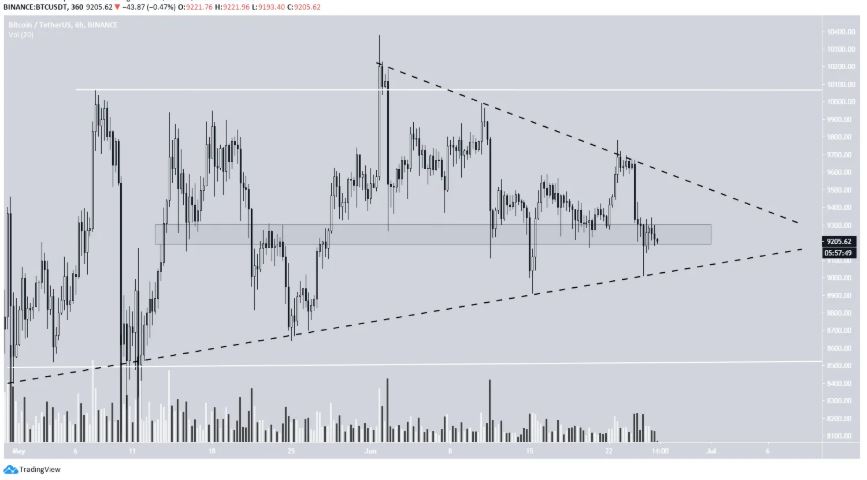 Trader MarketMinds from TradingView believes that the leading currency is about to rise to $ 12,500. According to his analysis, Bitcoin is forming an ‘ascending triangle,’ potentially taking it above $ 12,000.

However, he reminded everyone that Bitcoin is correlated with the S&P500 large stock index, currently facing FUD due to concerns about a second pandemic outbreak and another possible lockdown. 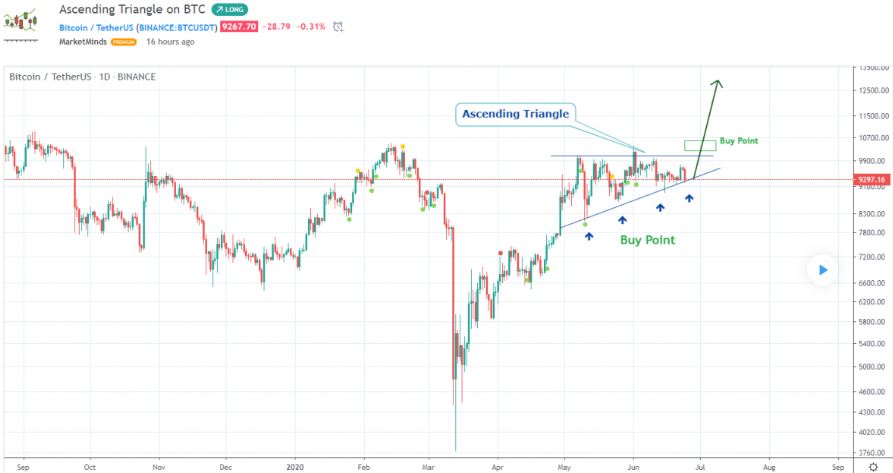 After plummeting below $ 235, Ethereum has found support near the $ 228 level. The ETH price started an upward correction above $ 230, but it was also lower than the 100-hour SMA.

The 100-hour SMA is also near the $ 235 level to act as a resistance. There seems to be a short-term downtrend channel formed with support near $ 230 on the hourly ETH / USD chart. If the pair does not exceed the channel support level at $ 230, it can continue to decline.

The next support is near the $ 228 level, below which the ETH price can test the $ 225 support level. Any other losses could cause a sharp decline below $ 220 in the near term.

The XRP price has been following the downtrend path for the past few days and is trading below the $ 0.19 support level, similar to bitcoin and Ethereum. XRP even broke the support of $ 0.185 and settled below the 100-hour SMA.

There was also a break above a major downtrend line with resistance near $ 0.1825 on the hourly chart of the XRP / USD pair. However, XRP is struggling to gain momentum above $ 0.182 after breaking the recent trendline.

Therefore, the XRP price must settle above the $ 0.125 resistance level and the simple moving average of 100 hours to move further into the upside. 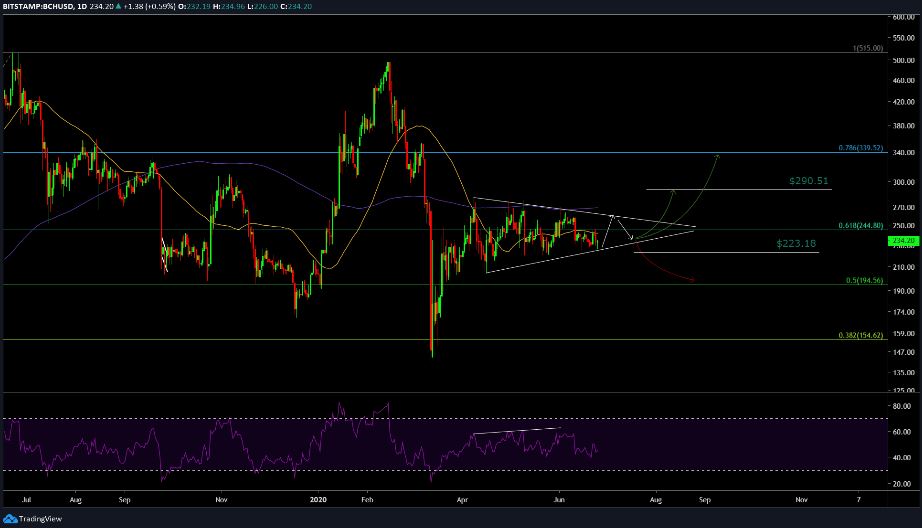 From the chart above, it is clear that the price of BCH has been consolidated since the March crash. This consolidation has formed a symmetrical triangle capable of breaking either way. Besides, the BCH price spike has been stopped at 0.618 Fib at $ 244.80, resistance since the beginning of April.

On closer inspection, it can be seen that the price has formed three lower highs, while the RSI has formed three higher highs, suggesting the existence of a hidden divergence. The bias of this divergence is towards the bears. Therefore, the price movement over the next few days can be expected to go south.

After the first decline, LTC has been moving along a descending resistance line since February 27. This line has rejected the breakout three times so far. The resistance line is also reinforced by the presence of the 50-day MA, which has turned down the price three times. Currently, the resistance and MA are located at ฿ 0.0048.

If the price breaks above this line, the nearest resistance area will be found at ฿ 0.0055. 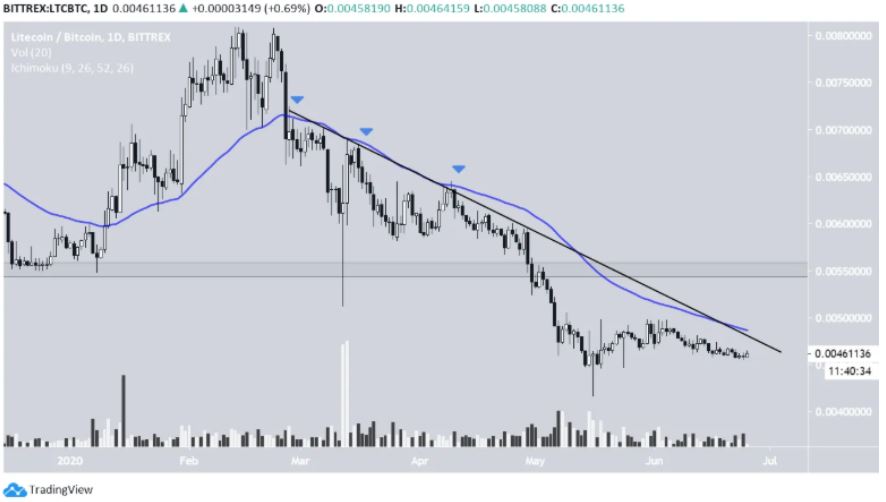 The short-term chart shows that LTC is trading inside a declining wedge pattern since June 5. The descending wedge is considered a bullish pattern, in which the price is expected to break up above the pattern. At the time of writing, the price is indeed in the process of breaking up on the pattern, after rebounding from the Fib 0.79 level of the previous up move.

Moreover, there has been a strong bullish divergence developing on the RSI (6-hour frame), making a breakout more likely.

If a breakout occurs, the nearest resistance is found at ฿ 0.00485, which also coincides with the 50-day MA mentioned in the previous section. 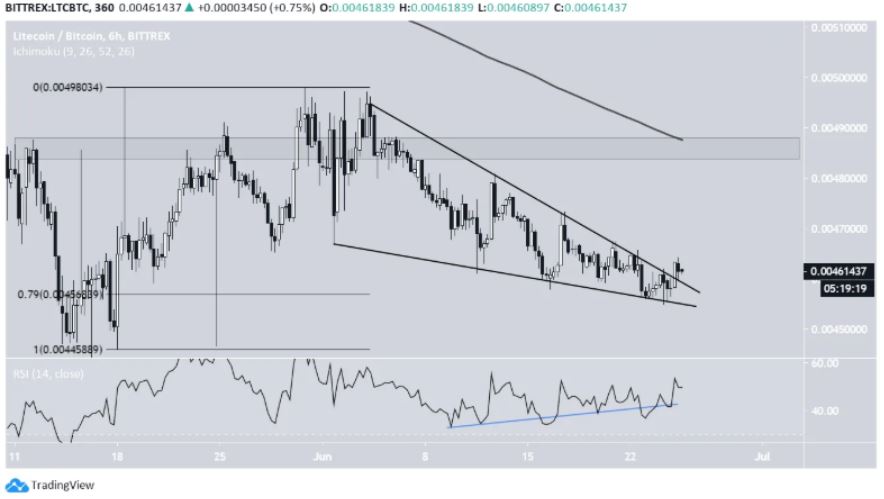 What is FunFair (FUN)?