U.S. stock futures moved lower for overnight trades on Wednesday, after witnessing the sell-off triggered by anxiety about the revival of coronavirus.

The negative headlines about Covid-19 have also brought the stock market into an empty exit on Wednesday. The Dow fell about 700 points, while the S&P 500 and Nasdaq fell 2.5% and 2.1%, respectively. All three benchmarks saw the worst day since June 11.

At the same time, the sideways trend of Bitcoin has ended, the price is trading down nearly 3% with the current price of $ 9,273. The area between $ 9,000 and $ 9,400 has been strongly supported, but it is unclear whether this area will hold up in the coming hours and days.

Not just Bitcoin, most altcoins recorded a 3-5% decline in the past 24 hours.

Bitcoin tested support at $ 9,200 and trading as low as $ 9,204. It is currently consolidating losses and trading within a range above the support of $ 9,200. There seems to be a short-term contract triangle formed with the support of nearly $ 9,200 on the hourly chart of the BTC / USD pair.

Yesterday, Ethereum faced a strong rejection near the major resistance of $ 250. The price of ETH formed a high near $ 250 and recently started falling sharply below $ 245.

The recent decline started after a break below a major triangle with support near $ 244 on the hourly ETH / USD chart. It opened the doors for many losses below the $ 240 and 100-hour SMA.

Ether price even broke the $ 235 support level and traded close to the $ 225 support level. A low is formed near $ 228, and the price is currently correcting higher. It is approaching the Fib 23.6% retracement of the recent decline from the $250 high to $228 low.

If successful, it could open the door for a new increase to significant resistance at $ 250 in the next sessions.

The XRP price failed to erase the $ 0.19 resistance level and began to decline sharply, similar to BTC and ETH. XRP has broken down the support levels of $ 0.188 and $ 0.185 to move to the bearish zone.

The decline makes it slide below the support of $ 0.182 and the 100-hour SMA. There is a break below an important contract triangle with support near $ 0.183 on the hourly chart of the XRP / USD pair.

Tezos (XTZ) price has been rising along with an upside support line since the beginning of April. It is currently bouncing on it a third time. The support is also strengthened by the presence of the 200-day moving average (MA), which is only slightly lower than this one.

However, the price is facing stiff resistance from the 50-day MA and the resistance zone of 29,500 satoshis, previously acting as a support. Until the price can successfully flip this area into support, this move cannot be considered bullish. 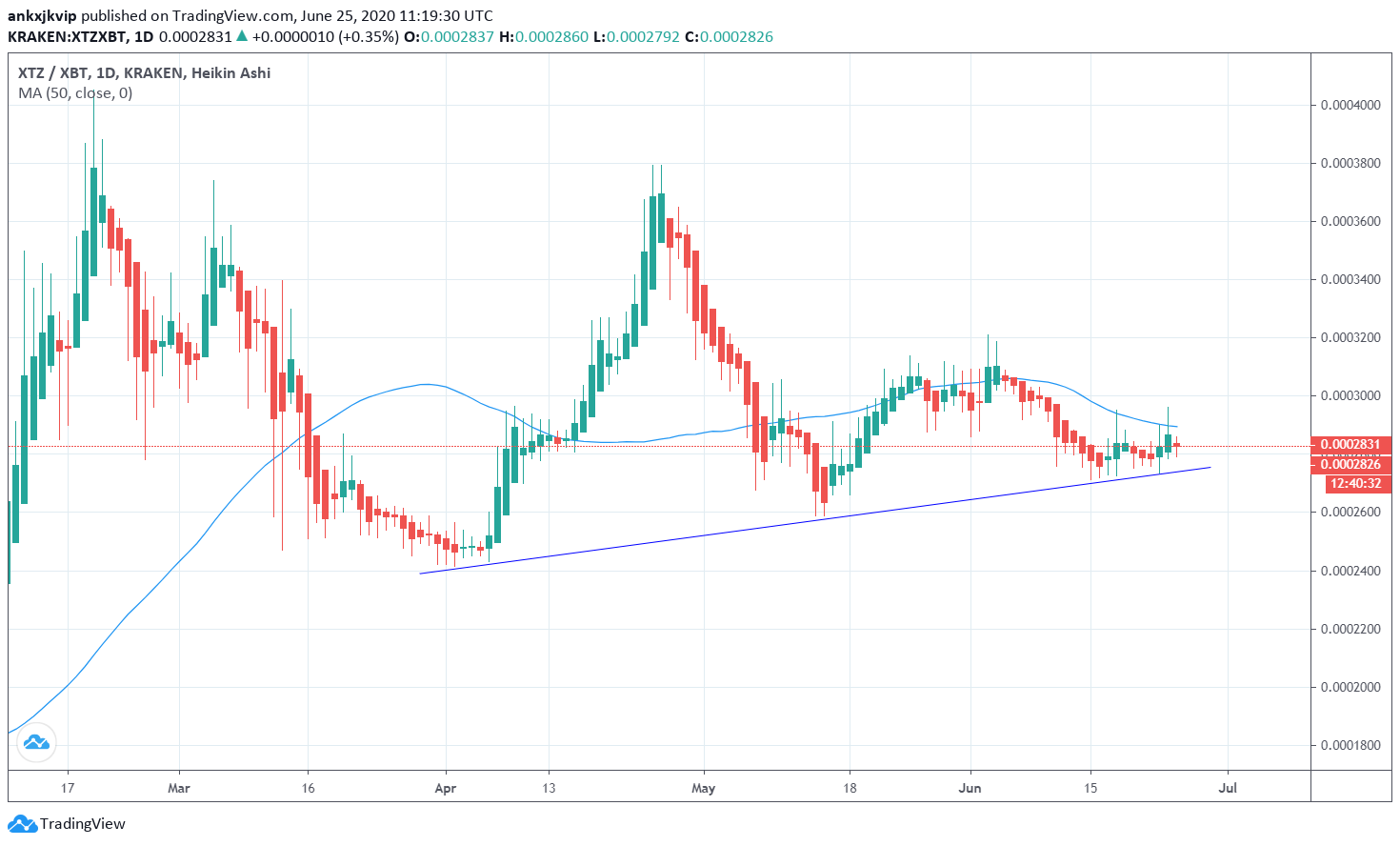 In the short term, XTZ has broken out from the descending resistance line, and the RSI is holding above 50. This is an indication that the price of XTZ will continue to move upward and surpass the previously established resistance. 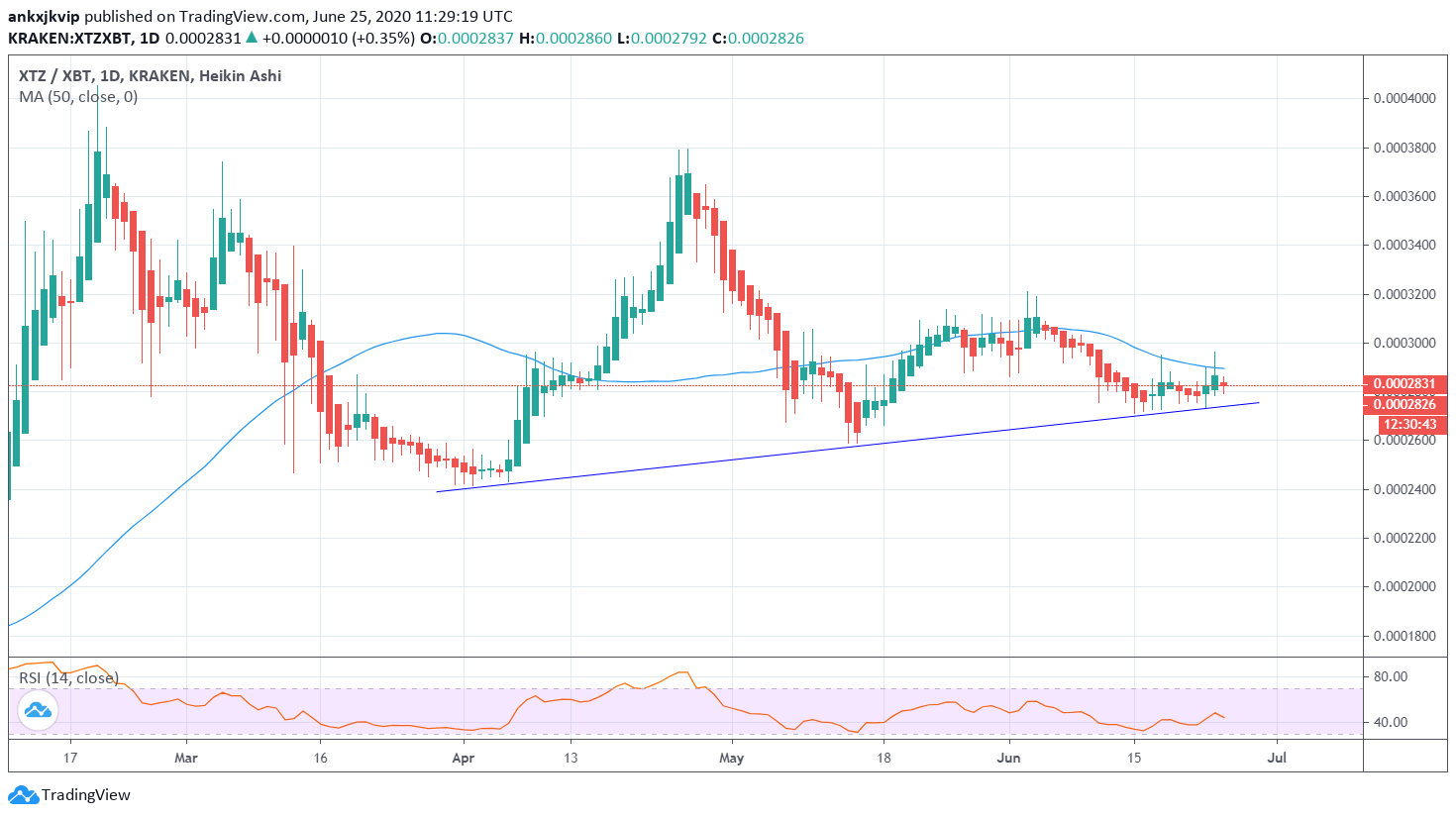 Cardano (ADA) price has increased since January 14. However, the rapid growth rate increased sharply at the end of May, along with the volume. The price reached a high of 947 satoshis on June 4 and has declined slightly since then.

The price must reach at least one of these areas because price action is still rising. This is especially evident in the long low of the June 19 candle. The candle confirmed the previous resistance and immediately bounced. 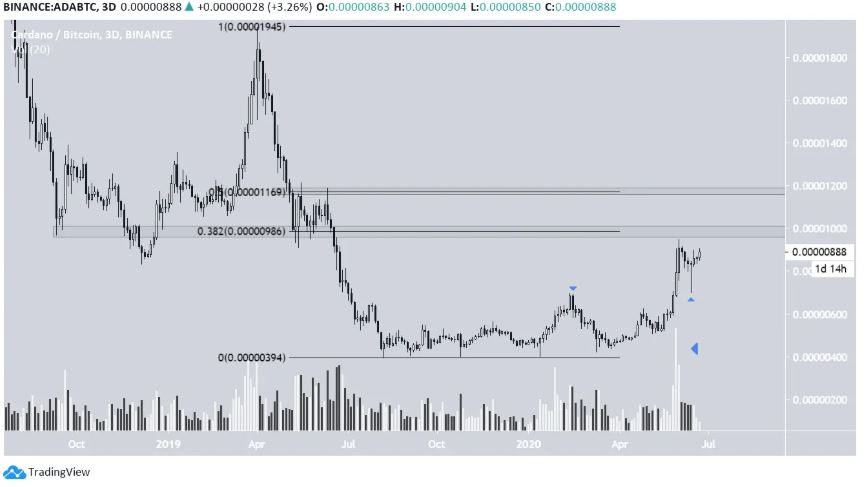 In the short term, ADA is trading inside a symmetrical triangle, except for the aforementioned wick that has come down below the rising support line.

Although the triangle is considered a neutral pattern, the fact that it is happening after moving up makes a break out of the possibilities. The scenario is further reinforced by the fact that there has been no recent price divergence. 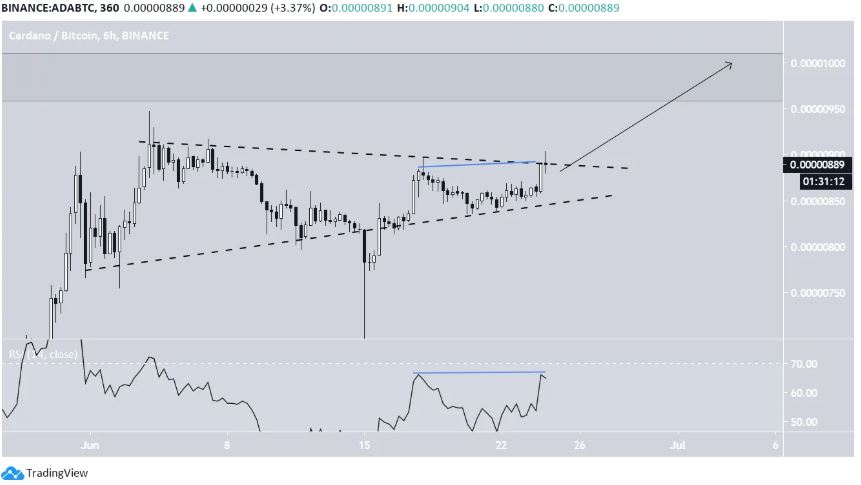 What is Wanchain (WAN)?

XRP whales recently went on an accumulation spree, XRP price has so far failed to rise