The expiration of nearly $ 1 billion worth of Bitcoin options contracts next week could be a catalyst for impending volatility. Arcane Research has investigated the impact of this event on the market:

“Close to $1 billion bitcoin options contracts will expire on Jun 26, accounting for 60% of the total open interest in the BTC options market. In situations like this, there could be significant financial incentives to move the spot price towards a certain level before the expire date.”

Bitcoin’s options volume only accounts for 1% of that seen by BTC futures and spot trading so it is likely that this event may not have any impact on the market.

Over the past week, Bitcoin has been steadily falling from its high above the $ 9,500 resistance. BTC price traded below the support of $ 9,300 and even slipped below 100 SMA (4 hours).

More importantly, there was a break above a major bullish flag pattern with resistance near $ 9,340 on the 4-hour chart of the BTC / USD pair. It opened the doors to making more profit than $ 9,350. 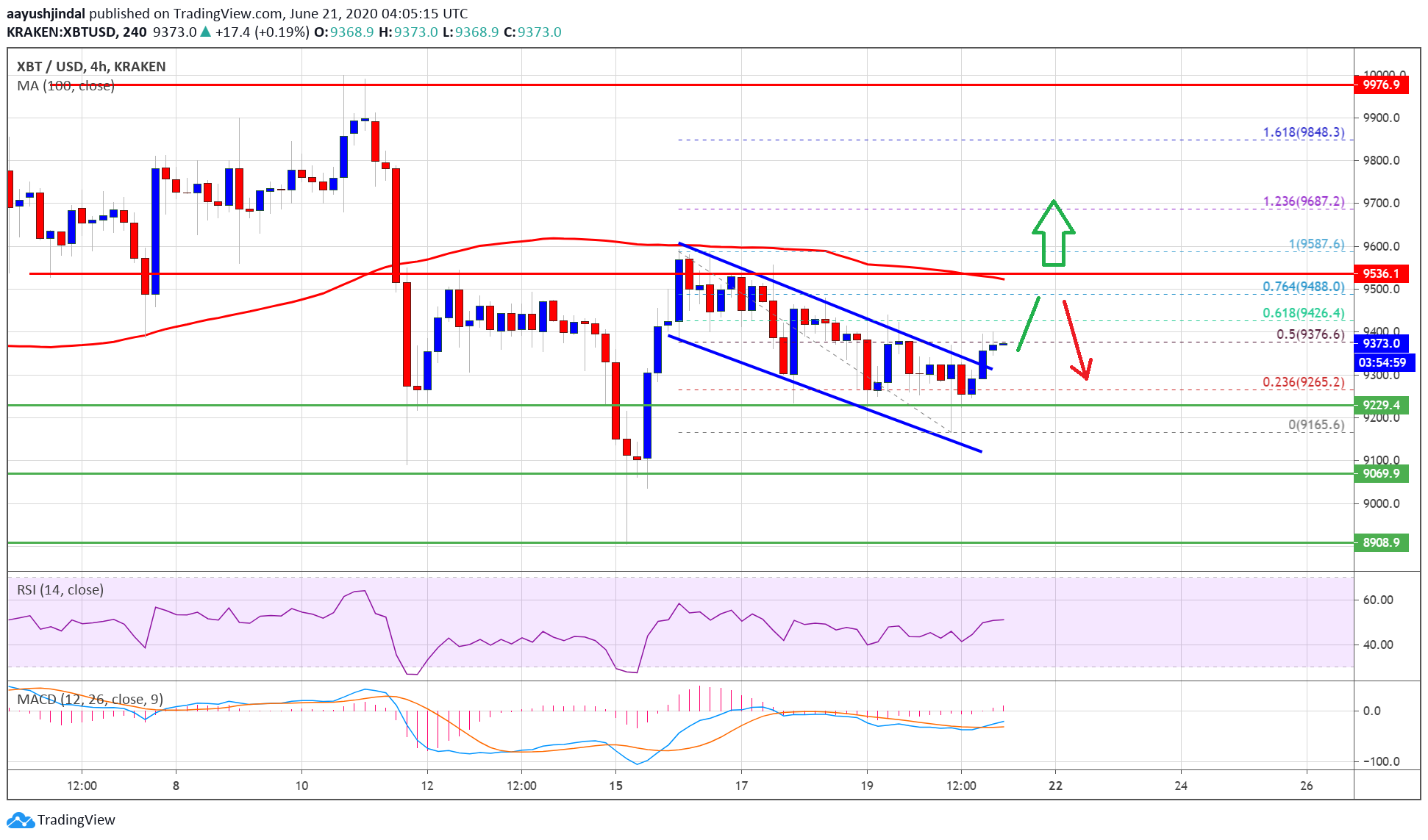 Over the past week, Ethereum has plummeted after failing to break through the $ 235 resistance. ETH price broke the support level of $ 230 and stabilized below 100 SMA (4 hours).

There is also a breakout on a major bearish channel or a bullish flag with resistance near $ 228 on the 4-hour chart of ETH / USD. It opened doors to make more profit than $ 230. 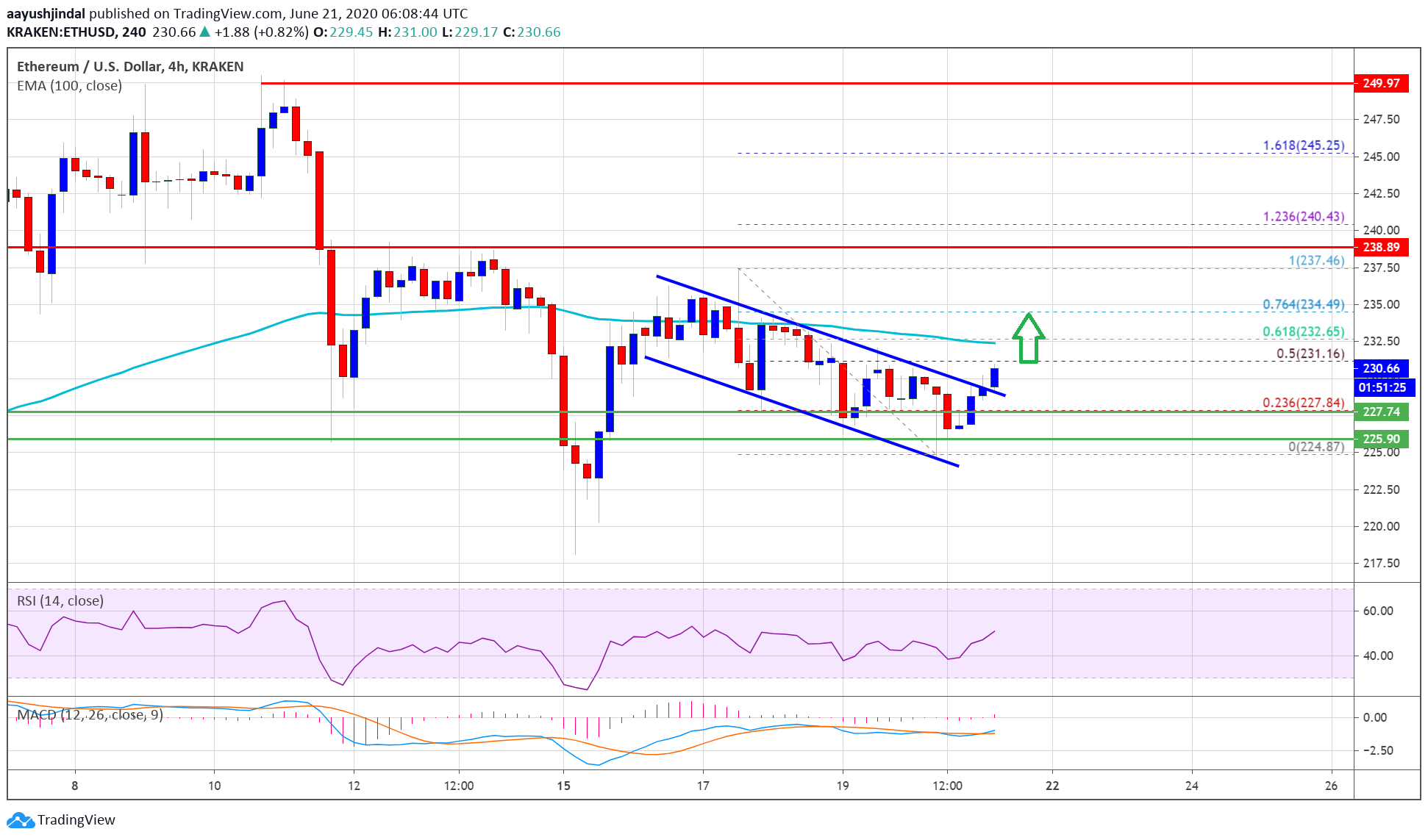 XRP is performing worse than BTC. Since the beginning of the week, it has decreased by 2.59%.

Looking at the daily time frame, a large triangle pattern was formed with an endpoint at the critical support of $ 0.125. Even with small bounces, XRP doesn’t have the power to grow like other altcoins in the top 10. Therefore, the continuous decline is supported by a falling volume, which means that a downtrend has begun. If the price continues to fall, it will slide to the aforementioned support level by mid-summer 2020.

BSV has found support around $ 172. From this point, we can expect growth to the nearest resistance at $ 178.50. The price increase is likely to occur, this is confirmed by the increase in volume with a high concentration of liquidity above.

Litecoin has been quite successful since the price collapsed in March. However, while it has twice crossed the price on March 12, June is still not good. In fact, since the beginning of the month, price has been on a downward trend.

According to the 1-day chart, the LTC price has been in the ascending channel formation for the past two and a half months, a level close to its breakout. If the price breaks out of this pattern, it will likely have a further downside and move towards its next strong support.

Currently, Litecoin has two key supports at $ 39 and $ 35. The resistance is around $ 47. Once the price breaks out of the pattern, it is likely to target Target 1 at $ 39 for a few weeks. If the rally is sustained in the short term, the price could stay in the pattern and head towards the strong resistance at $ 47.

EOS is showing a much better price action than some other altcoins in the top 10.

EOS has been trading in a descending channel since the beginning of the month. Its liquidity is relatively high but the lack of volume has pushed the price of coins down. The potential scenario is a test of the $ 2,403 support level shortly.

Stellar is one of the biggest losers, having dropped about 5% since last week.

XLM is trading in the same way as EOS. Its liquidity is high but trading volume continued to decline. This means no buyers are willing to buy at the current level. The next support is $ 0.065, which can be reached by the end of the month. However, if the bears break this sign, the long-term trend will turn bearish.

Dogecoin emerges among the top rewarding projects for miners, exceeding Bitcoin SV and even Bitcoin Cash