Over the past few days, the S&P 500 has increased but Bitcoin has stalled. PlanB, the creator of the stock-to-flow model, said both assets are highly correlated but their current performance is showing big differences in the short term. Therefore, he predicts the stock market will correct or Bitcoin will rally.

Since Bitcoin collapsed from an all-time high in 2018, investors have been wondering when the cryptocurrency market will enter the next bull market.

An important on-chain indicator that predicts the beginning of some historical BTC price uptrend predicts that the next trend is imminent.

The index approaches the buying area indicated in the chart below that was marked in the history of the start of the bull run. 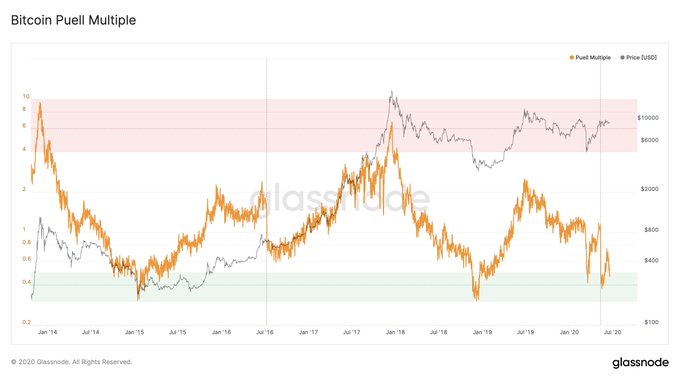 When Bitcoin price dropped to $ 200 in 2015, the Puell Multiple quickly entered the buying zone. The price of BTC increased thousands of percent in the following years. And when BTC reached $ 3,150 at the end of 2018, the buying area was violated by the indicator again.

This historical precedent suggests that Bitcoin will soon begin a longer-term uptrend but it is not the only indicator to show this.

The Bitcoin network made a lower adjustment earlier this month to ensure that BTC blocks are mined at a rate of six per hour or every ten minutes. While some people see this as a sign of a “miner capitulation”, others are more optimistic.

“Today is the 9th monthly downward DA What makes this one unique is raised the 1st to occur post halving. Monthly DDA’s may signal miner capitulation and market bottoms.”

Another on-chain data shared by CryptoQuant (CQ.live) shows that investors are betting on the bull case for Bitcoin.

According to the chart above, the  BTC Miners’ Position Index (MPI)  moves above zero when the price is near the local peak. The metric is currently nearing lows not seen since the market bottom in late-2018/early-2019, suggesting miners see similar potential in BTC to move higher.

Meanwhile, trader “Haven Caesar $ XHV” observed that Bitcoin’s price action since the March 12 to 13 collapse to $ 3,700 looks extremely similar to the pattern seen from April to early June 2019.

If Bitcoin continues to follow the previous trajectory, a strong surge will occur in the coming weeks.

Both periods had a steady upward trend, a vertical rally, followed by a close consolidation. Last year, close consolidation settled higher, with BTC rising 50% in two weeks from the base ~ $ 9,000 of the rally to a 14,000-year high. The target this time will be $ 15,000.

After being strongly rejected at the $ 250 resistance level, Ethereum was stuck in a consolidation that caused the price to slide to $ 230 at the time of this writing.

Analyst “Cold Blooded Shiller” shared the chart below and said that he intends to shorten ETH in the coming days:

‘This is exactly in line with what Renko tells me with a solid divergence already locked in for $ETH. Tired”. 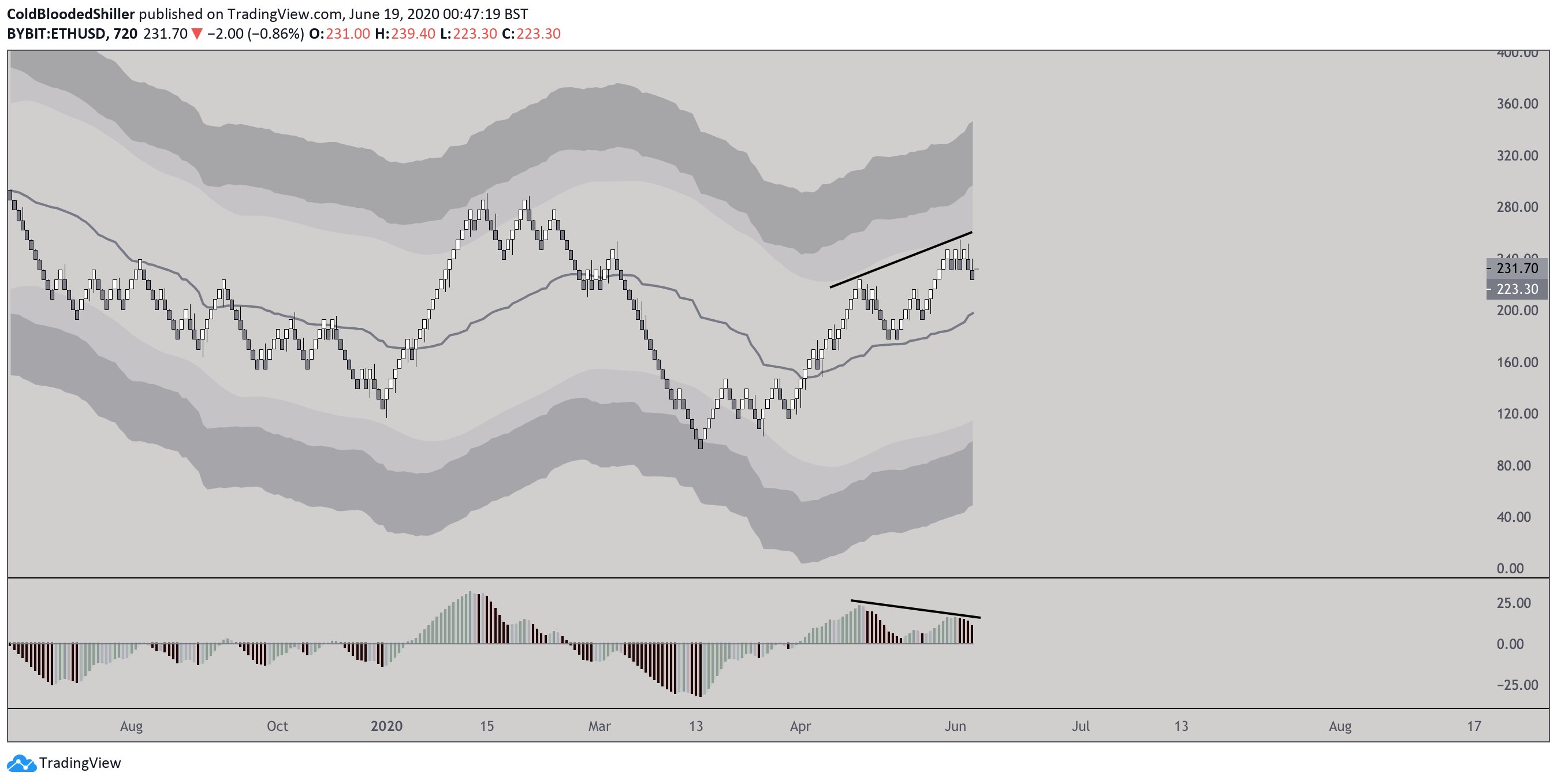 The chart shows that a bearish divergence has formed between Ethereum’s price action on the 12-hour chart and a momentum indicator, suggesting bulls are losing strength.

Adding to the bearish sentiment, history shows that assets are on track to correct for six months. Analyst “Edward Morra” previously noted that a pattern had formed in which ETH protests in the first six months of the year, then corrected lower in the second half.

Yesterday, the seller took the initiative and pushed the XRP price below the support at $ 0.19 in small volumes. Currently, its price has set a local low at $ 0.187.

If the buyer cannot push the price, then the rollback could continue to the purple border above the downward channel. If the volume increases, the pair will return to the area of ​​the average price.

On the 4H chart, the bulls are holding the XRP price at local support levels, attempting to maintain the uptrend. Trading volume, as well as liquidity, did not decrease, which indicates that buyers are creating pressure at the current level. If successful, we can expect growth to the end of the Triangle pattern at $ 0.1934.

Small rollback on small time frames does not change the long-term bearish outlook. Trading volume continues to decline and XRP cannot break out from the descending channel. $ 0.1870 is the first point buyers can show their strength. If this level fails to hold, the next key support is around $ 0.1740. If the bears continue to dive the price lower, the above-mentioned areas could be broken in July 2020.

According to the 1-day chart, the BSV price has been in the descending channel formation for over a month and close to the potential breakout level. If the price breaks out from the pattern, it could rise with a high probability that it will approach resistance immediately.

Currently, there is an important support that it is currently testing at $ 168. The next resistance is $ 189 with another strong resistance at $ 198. When the price breaks out from the pattern, it is likely to target Target 1 in the next few weeks. If the bullish momentum fails to sustain, it could even head towards the second support at $ 160.

The EOS price has been trading in a range of 2700 to 2900 satoshi since May 7. It has twice moved down and up above this range on May 14 and June 5 respectively. Both times returned to the range shortly thereafter.

At the time of writing, the price is trading right above the support line of this range, having created some long lower wicks below it.

There is a potential double bottom pattern, combined with bullish divergence on the RSI. However, the trend is very unusual and the difference is not particularly clear.

In the short term, the price can trade inside a symmetrical triangle. It has shown strength by turning the small area of 2690 satoshi into support, but still faces resistance from the 2710 satoshi area.

A breakout above 2710 satoshi and the descending resistance line of the triangle will indicate that EOS is likely ready to continue moving upwards.

In this next cycle, DeFi will likely help push ETH price to $1 trillion CoinMarketCap?