Gita Gopinath, Chief economist of the International Monetary Fund (IMF), warned on June 16 that the world economy is on a slide much faster than its April forecast.

When European countries entered the first weeks of blockade, the IMF once considered that the world economy would experience the worst financial crisis since the Great Depression of the 1930s. At that time, the agency forecast world GDP to drop 3% this year. Up to now, when some economies began to reopen, the IMF continued to warn the situation could be worse.

Gopinath also warned that financial markets could face a sharp correction if the medical or economic situation is getting worse.

Meanwhile, the crypto market is stabilizing after the latest plunge, causing the Bitcoin to slide below $ 9000. BTC rallied again on Tuesday along with similar moves in the US futures market.

Bitcoin is forming a bullish structure even if the short-term trend supports the downtrend.

It is following a textbook technical model called the Falling Wedge. The indicator is confirmed when an asset declines continuously while leaving behind higher lows and higher highs. It leads to two contract descending trend lines acting as parameters for assets.

When it appeared, Bitcoin was trending downward inside a Wedge Falling. The top of the pattern is $ 10,428, the resistance from June 1 that caused bitcoin to correct lower. Since then, the cryptocurrency has been testing Wedge’s upper trendline, which is the lower resistance and trendline as a support. 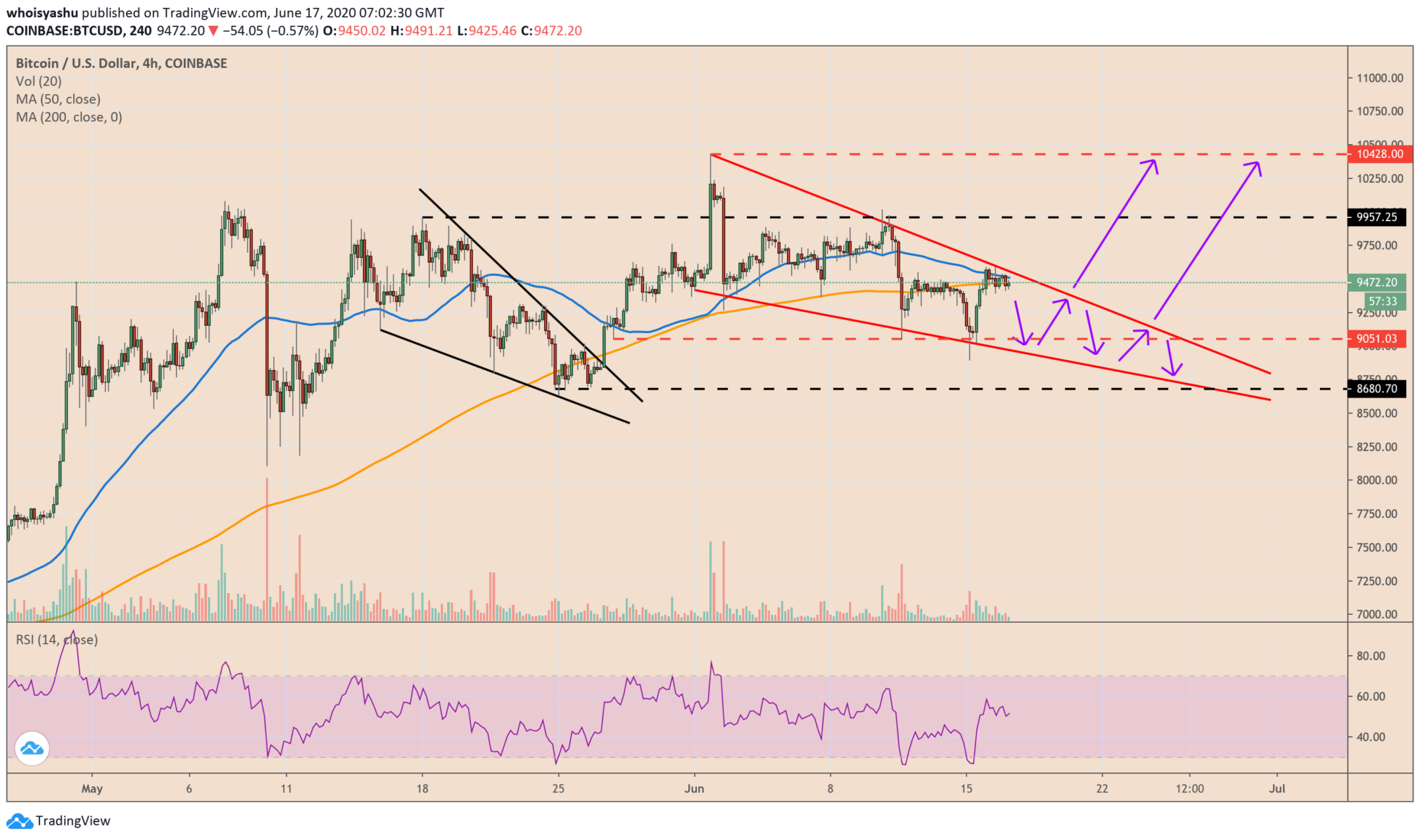 The result of an increased Wedge is usually bullish. As the bitcoin trend continues lower and breaks below key support levels, its recalculation will appear when it closes towards Wedge’s top – the junction where the upper and lower trend lines intersect.

The crypto will then break through the uptrend above the trendline and move towards a bullish target near Wedge. In the current case, that high is near $ 10,428, which is almost indicative of a bullish pattern near the $ 10,500 level.

The Wedge’s conical tip is currently close to $ 8,600. As Bitcoin moves lower, it will keep an eye on potential rebound.

A well-known analyst on TradingView.com saw bitcoin collapse to as low as $ 5,000 if it closed below $ 8,600 – a scenario that would invalidate Wedge.

Meanwhile, the analyst asserts that maintaining above $ 9,200 – the June 2020 support level – will reduce the likelihood of a price hike in failure.

“Any daily close below 8600 will be the right time to exit the market and position yourself in USDT. We can go way lower can even touch the $5k level. Maintaining that $9200 level will save us from being bearish but if somehow BTC manages to close above the $10,500 key resistance, we will be entering a potential multi-year bull market.”

Despite the potential failures, the old fractals show a higher probability of Bitcoin attempting to breakout towards $ 10,500.

Cryptocurrencies formed a similar Falling Wedge pattern between May 15 and 27, eventually breaking out in the upside. Finally, the price was tested and even moved on top of Wedge at $ 9,957, as shown in the first chart above. 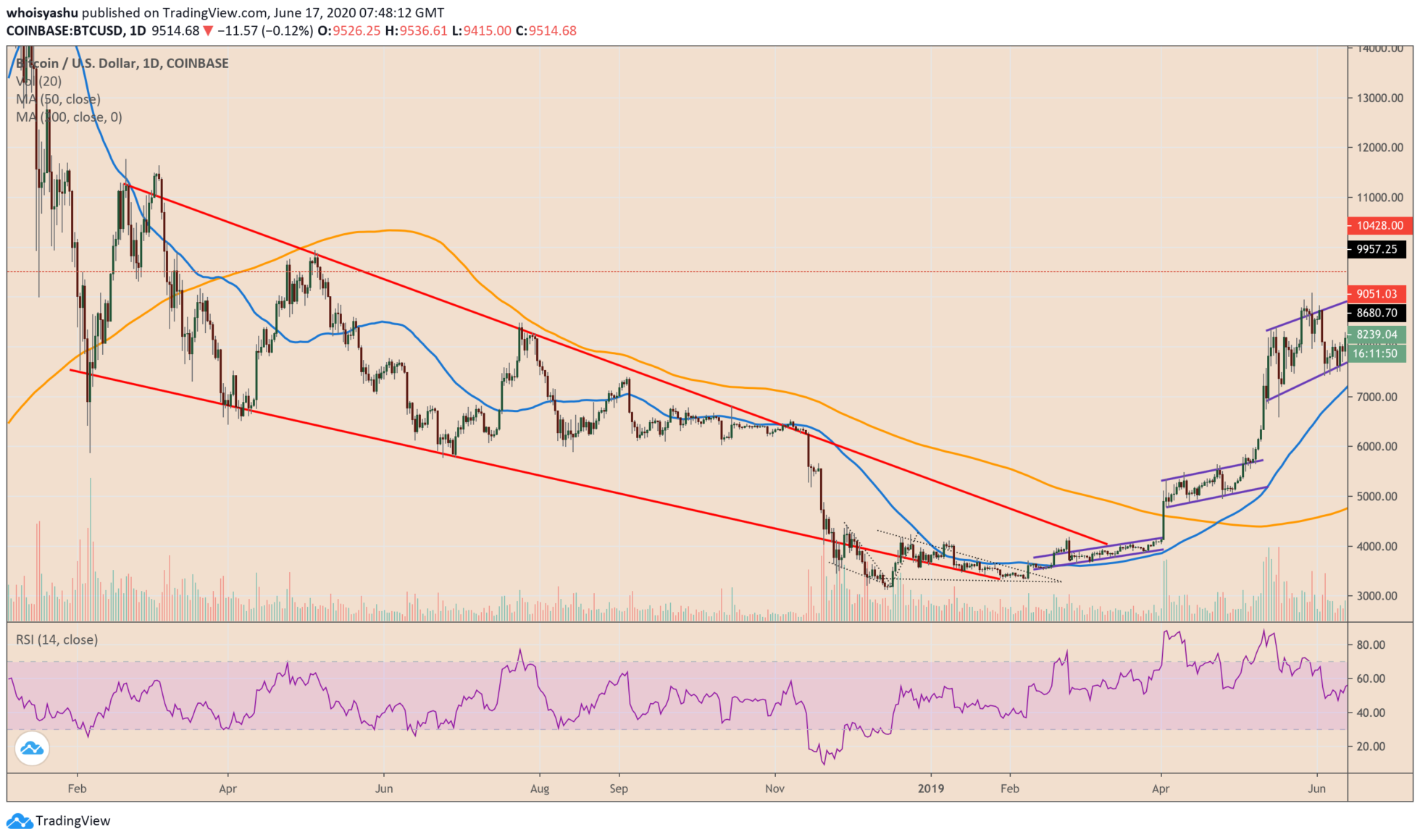 Bitcoin painted another but broader Falling Wedge pattern during the downtrend of 2018. It eventually resulted in a massive breakout that took the price from $3,120 to $14,000.

A high formed near $ 236 and the price is currently consolidating profits. It corrected below the Fib 23.6% retracement of the recent wave from a low of $ 218 to a high of $ 236. It seems that ETH is currently stuck in a range and trading near the 100-hour SMA.

There is also a major ascending channel formed with support near $ 232 on the hourly ETH / USD chart. The Fib 50% retracement of the recent wave from a low of $ 218 to a high of $ 236 is also just below the channel’s support.

Yesterday, XRP set a June low near the upper boundary of the bearish channel but could return to the average price by the end of the day.

Now, it is trying to gain a foothold at the EMA55 for two hours and if the buyers could continue to grow, today the price could reach the psychological level of $ 0.20. This support will keep the price flat for a while. If buyers are unable to push price today, the orange support at $ 0.190 could save the pair from a deep fall.

This month, the BCH price peaked near $ 265 and started a new round of discounts. It has broken down of the $ 250 support zone and the 100 SMA (4 hours) to move into the bearish zone.

It looks like there is a descending channel forming with resistance near $ 238 on the 4-hour chart of the BCH / USD pair. If there is a bullish break above the channel resistance at $ 238, the price can bounce back to the $ 246 resistance.

There is also a large bearish trend line forming with resistance near $ 248 on the same chart. Therefore, BCH price must break the resistance of $ 248 and $ 250 to move to positive territory in the near future.

Litecoin has been trading inside a large symmetrical triangle since April 16. It is expected to breakout from this triangle and towards the long-term resistance levels.

Although LTC has increased since March 13, but during the period from April 16, it was trading inside a symmetrical triangle. While the symmetrical triangle is often regarded as a neutral pattern, the fact that the pattern appears after moving upwards increases the likelihood of a breakout. 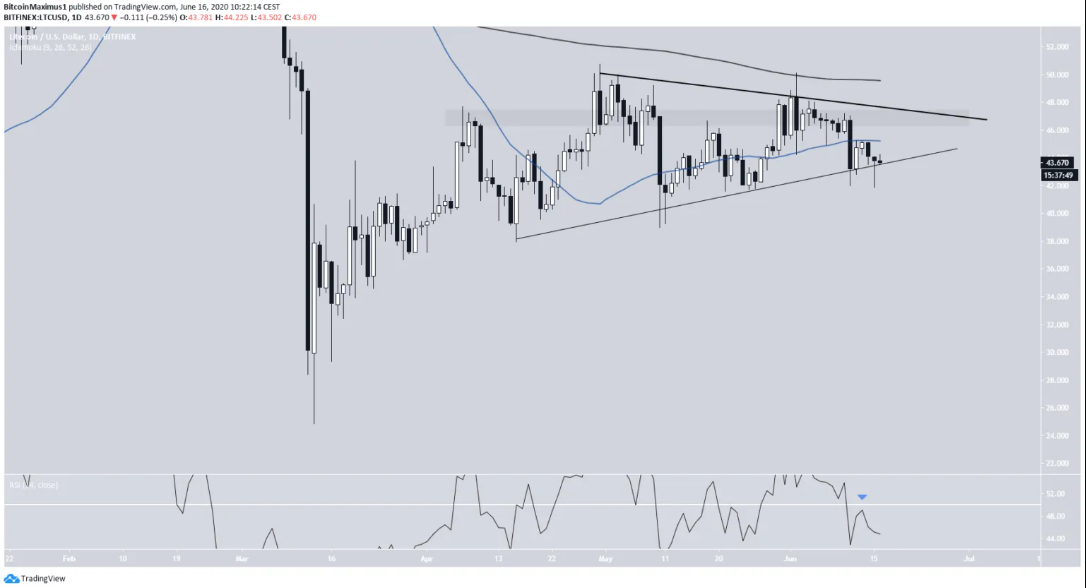 Trader Cryptotoad believes that LTC will breakout from the symmetrical triangle:

“It’s taking a bit longer than expected, but Litecoin is still looking primed for a blast. C’mon LTC show me some of that juicy stuff.”

Former Chairman of the Commodity Futures Trading Commission: XRP is not a security