Bitcoin risks falling after breaking below an important ascending channel while the technical picture of some leading altcoins is not too positive.

The bears took control and could dive the price below the support of $ 9,500 and 100 SMA (4 hours). The decline began after a break below an important ascending channel with support near $ 9,780 on the 4-hour chart of the BTC / USD pair.

There is also a major bearish trend line forming with resistance near $ 9,770 on the same chart. Therefore, the price must break 100 SMA (4 hours) and then the trend line to move into positive territory.

Over the past week, Ethereum price has failed to settle above the $ 250 resistance level. As a result, ETH plunged below the support levels of $ 245 and $ 240.

The decline begins after a break below an important ascending channel with support at $ 244 on the 4-hour chart of ETH / USD. The pair even broke support levels of $ 230 and 100 SMA (4 hours).

A successful break above the $ 240 resistance zone is likely to push price into the positive territory. The next resistance level is near the $ 250 level, above which the price could rise to $ 265.

Yesterday morning, Ripple‘s XRP continued to recover to $ 0.195. However, the buying volume was below the average and the pair turned to consolidation with the support at $ 0.191.

Today, the movement in the party hallway may continue. Even an average bullish impulse can save the situation and return the price to its Control Point (POC) line ($ 0.204). From this POC line, buyers can continue to dive price back to the $ 0.213 resistance level. However, the bears can still strengthen the attack and then the pair will return to the descending purple channel. The support of $ 0.170 can keep the market from slipping into the next local downtrend.

Yesterday, BSV price did not escape the pressure of the bear when it was rejected with the other top 10 coins. Although over the past 24 hours, price have increased marginally by 0.53% but have still fallen by 6.22% throughout the week.

Looking at the daily chart, $ 180 level has served as a strong support for a considerable amount of time. At the moment, BSV is trading above it; However, the lowering of the height is a sign of the upcoming decline.
In this particular case, the bulls need to focus on $ 180. If the bears could break and correct below this level, the next level to watch is $ 170. However, it is more likely that the price will retest the top of the falling channel at $ 190, then a fall to $ 170.

After the sudden market crash in March, Bitcoin was resilient enough to return to an annual high of $ 10,400, albeit briefly. However, the LTC did not register the same level of endurance, as it continued to consolidate quite far below the yearly high of $ 84. Now it seems that the situation has not improved much for LTC and a constant struggle is evident under the downward pressure on the charts.

As illustrated by the charts, the main problem with the LTC price hike story is the inability to soar above the MA 200 (orange line). On the contrary, both Bitcoin and Ethereum have been trying to maintain a positive trend on their MA lines on the charts for the past few weeks.

At the time of writing, LTC price continued to move in the trend lines of an ascending channel. At first glance, a bearish breakout is about to occur when the price is constantly moving below the MA line of the channel pattern.

Considering the possibility of a breakout, LTC may be likely to fall below its support at $41 – $40, a range held since the beginning of May. A rapid rise to the resistance level at $ 48 may appear in the next two weeks, but is unlikely to break the target. Strong support below $ 40 remains at $ 36.

At the time of writing, the RSI is showing a glimmer of hope when buying pressure holds it above 41. However, any move below this level will likely bring it down to $ 36.

As for the Fibonacci retracement level, LTC has been close to the level of 0.618 at $ 44 since the end of April. However, considering the decline, a expected position below 0.5 ($ 39) could appear by the end of June 2020. A deeper pullback will eventually bring cryptocurrency assets close to 0.382.

Moreover, the bearish nature of the MACD, as the red line is hovering above the blue line, is likely to reduce optimism in the market.

The technical picture of BNB is not too positive. It has lost 6% since last week. 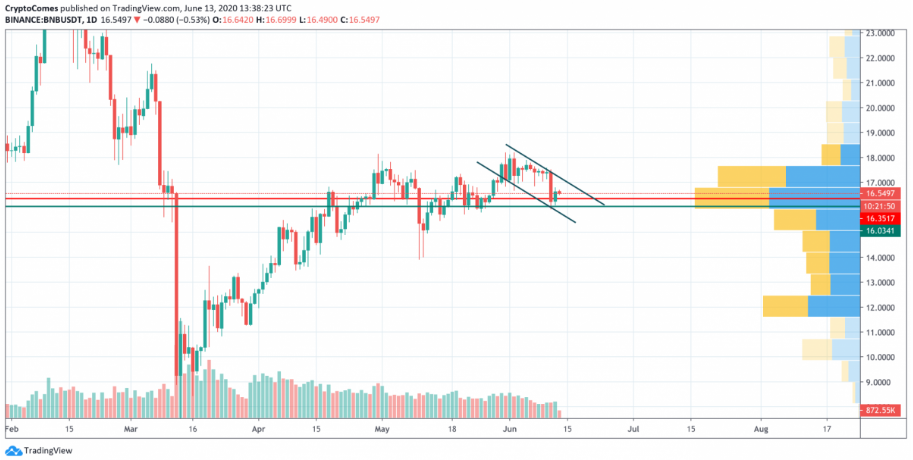 Looking at the daily chart, BNB has increased but it is not accompanied by an increase in trading volume. Moreover, the volume has recently begun to decline, which is not good for the expansion trend. There are also long discount candles with virtually no wicks, indicating that the March 2020 bull run is about to end. The support of $ 16 is the first stop for the bears.

Ripple CTO David Schwartz: Ripple’s ODL product can work “with no XRP infrastructure at all”

What is Bancor (BNT)?