When the bell of closing trading rang on Wall Street, Bitcoin was also in a state of substantial corrections, when the coin fell below the $ 6,000 threshold, having touched the peak of $ 6,900 a few hours earlier. The sharp drop of $ 1,000 from $ 6,670 to $ 5,670 certainly surprised investors when it was outside the range of analysts’ expectations. Therefore, Adaptive Capital, a cryptocurrency hedge fund, had stated that it would shut down all operations.

Adaptive Capital, a cryptocurrency hedge fund, had stated that it would shut down all operations after suffering heavy losses during the March 13 cryptocurrency market crisis when Bitcoin price dropped too low in 2020 at $ 3,775. The Fund has now issued a letter to its investors, notifying the closure and returning all remaining assets to investors.

From October 3, 2018, to May 3, 2019, the hedge fund reported an increase of more than 552.77%. And the cause of the shutdown must come from a series of infrastructure problems with transaction locations.

Although the venue was not listed in the letter of the adaptive investors, BitMex did not work for nearly an hour during a major sell-off, making hedge fund operators unable to meet the market. BitMex has since reported this and has blamed a DDoS attack during the down phase.

Since falling from $ 10,500, Bitcoin price action has been falling, and the positive trend of digital assets seems to have been broken on February 26, when the daily candle failed to reach above $ 9,200. This has completed a head and shoulders pattern and followed by a sharp bearish move for Bitcoin. 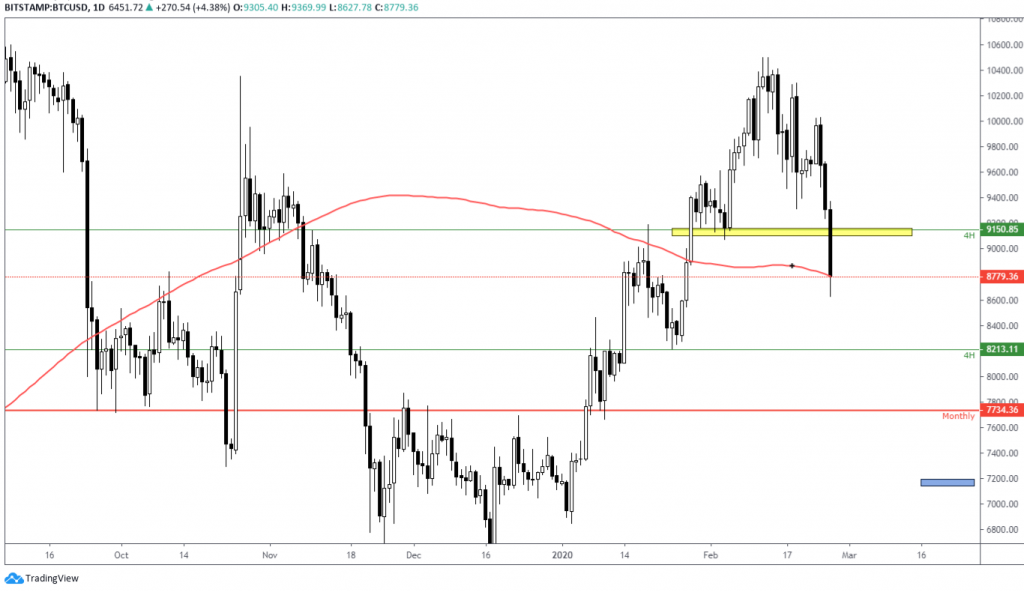 The bloodshed that followed was unpredictable because no one, including adaptive Capital, seemed to expect a depreciation of about 50%, leaving Bitcoin near $ 3,775, a price point that hasn’t been seen since April last year.

Like many institutional investors, Adaptive Capital has had the longer Bitcoin’s price action on longer timeframes in mind. Proof of this comes from an August 2019 tweet from Murad Mahmudov, former Goldman Sachs analyst and the Chief Investment Officer at Adaptive Capital.

At first glance this looks like a weak chop for the next week or so, but my intuition tells me there is steady accumulation happening at these levels.

Don’t try to outsmart yourself on short timeframes, zoom out & think big. In my view, BTC is going to $100K per orangecoin. pic.twitter.com/uccAgZdcXo

With this situation, Adaptive Capital and other hedge funds will be like?

Cryptocurrencies have become popular with cryptocurrencies and traditional financial investors, especially in 2018. They usually range from hedge funds like Alliance Capital to venture capital funds like Digital Currency Group.

In a report published in May 2019, PwC estimates that in 2018, 150 active cryptocurrency hedge funds jointly managed $ 1 billion in assets and despite the negative performance of many new and ambitious cryptocurrencies hedge funds are still being created. However, the number of new funds has been created, although the number of new funds generated has now dropped by more than half in 2019 compared to the previous year.

Despite the signal of the organization’s need for cryptocurrencies and Blockchain technology, this did not come true in 2019, and hedge funds could only suffer too much damage before they throw it into towels. According to a December 2018 report from Crypto Fund Research, nearly 70 cryptocurrency hedge funds have ceased operations.

The biggest problem the SEC worries is that the Bitcoin market is too easily manipulated. Most recently, the SEC rejected another ETF submission by Wilshire Phoenix. The NY-based company hoped to hedge against Bitcoin’s volatility by including US Treasury bonds in the basket.

When the Coronavirus epidemic hit, it’s hard to say how hedge funds and other market players will cope. Still, even as traditional safe-haven assets like gold continue to fail, Bitcoin can find itself to a whole new territory.

Dump then moon. We are undergoing flight to safety right now, BTC is looking for its bottom. But know that once the bottom is in there are strong bullish pressures ahead. It’s this economic environment in the years ahead that Bitcoin was built for. https://t.co/ILn3aXTJXG