Bitcoin formed a Darth Maul candle in the most recent decline from $ 9900 to the $ 9500 area in just a few minutes while some leading altcoins are starting a downside correction. 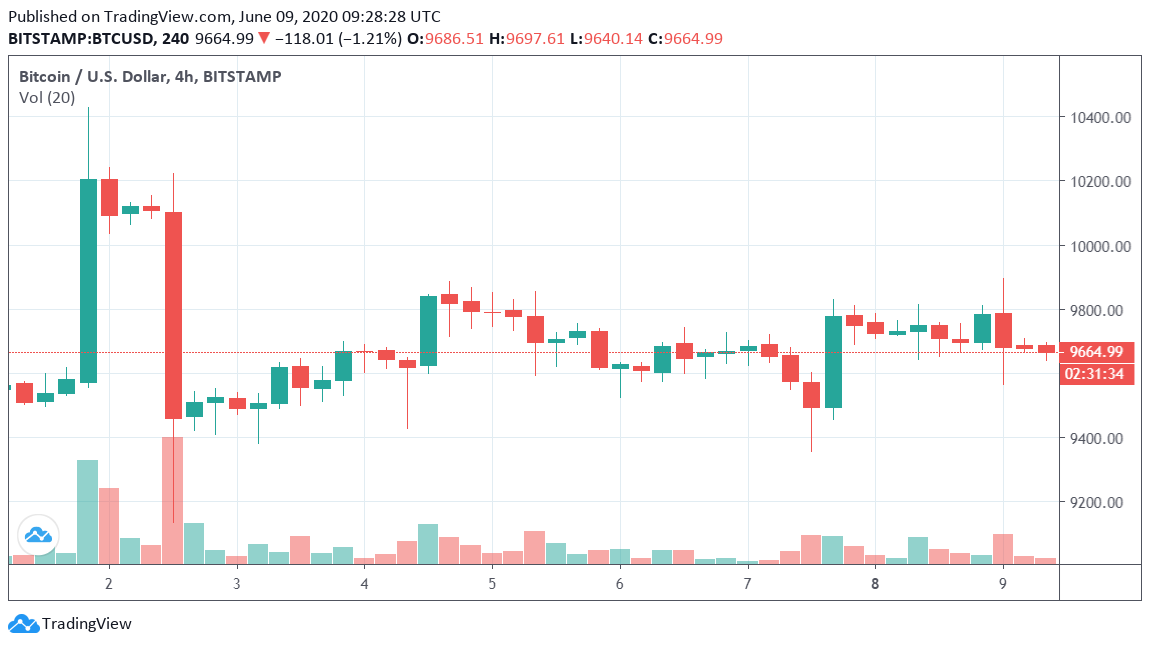 Analysts likened such a candle to the light saber of Darth Maul, the Star Wars villain with a weapon that produces lasers from both sides and Bitcoin trying to stabilize at the beginning of this Darth Maul candle.

Blockware Mining CEO Matt D’Souza summed up the market trend very well in a recent tweet as he wrote:

“Whats interesting is Bitcoin has stayed in a range I call “purgatory” 8k-11.5kish.”

This recent difficulty adjustment isn’t price induced selling from price shock. Its expected as miners upgrade old gen. Whats interesting is #bitcoin has stayed in a range I call “purgatory.” 8k-11.5kish = thin margins for all & will slowly weed out mid gen as new gen come online

A well-known trader recently noted that Bitcoin’s price action over the past two weeks, with a breakout attempt at $ 10,400, looks almost identical to the formation marking a high of $ 10,500 in February.

He shared the chart below illustrating the similarities, showing that BTC could soon sink lower:

“Bitcoin already had something similar before: a very specific fakeout shape followed by a lot of the squeezes in both directions.”

The price of ETH is still in a tight range below the key resistance zone of $ 250. Altcoin has tried to increase further.

If the price breaks the support of the trendline, there is a good support waiting at close to $ 242 and the 100-hour SMA. On the upside, there is a major resistance formed near the $ 248 and $ 250 levels.

If the bulls succeed in closing above the $ 250 resistance, the price could start to rally. The next major resistance may be near the $ 260 and $ 262 levels.

XRP has held steady around $ 0.20 for the past few weeks, but it has been caught in a strong downtrend in the Bitcoin trading pair.

This weakness comes primarily from the overwhelming strength seen by King Coin – although XRP is one of the few larger tokens that haven’t been able to follow BTC in the past few weeks.

In addition to the recent loss of top 3 market capitalization to Tether, it has also witnessed a serious decline in trading volume.

Analysts believe that this weakness will have a short-term impact on its USD trading pair – with the goal of a 20% price drop to $ 0.16.

Trader ‘Benjamin’ wrote about this goal in a recent tweet, explaining that although this marked a noticeable short-term decline, but it can give traders a “pretty sweet long” opportunity. 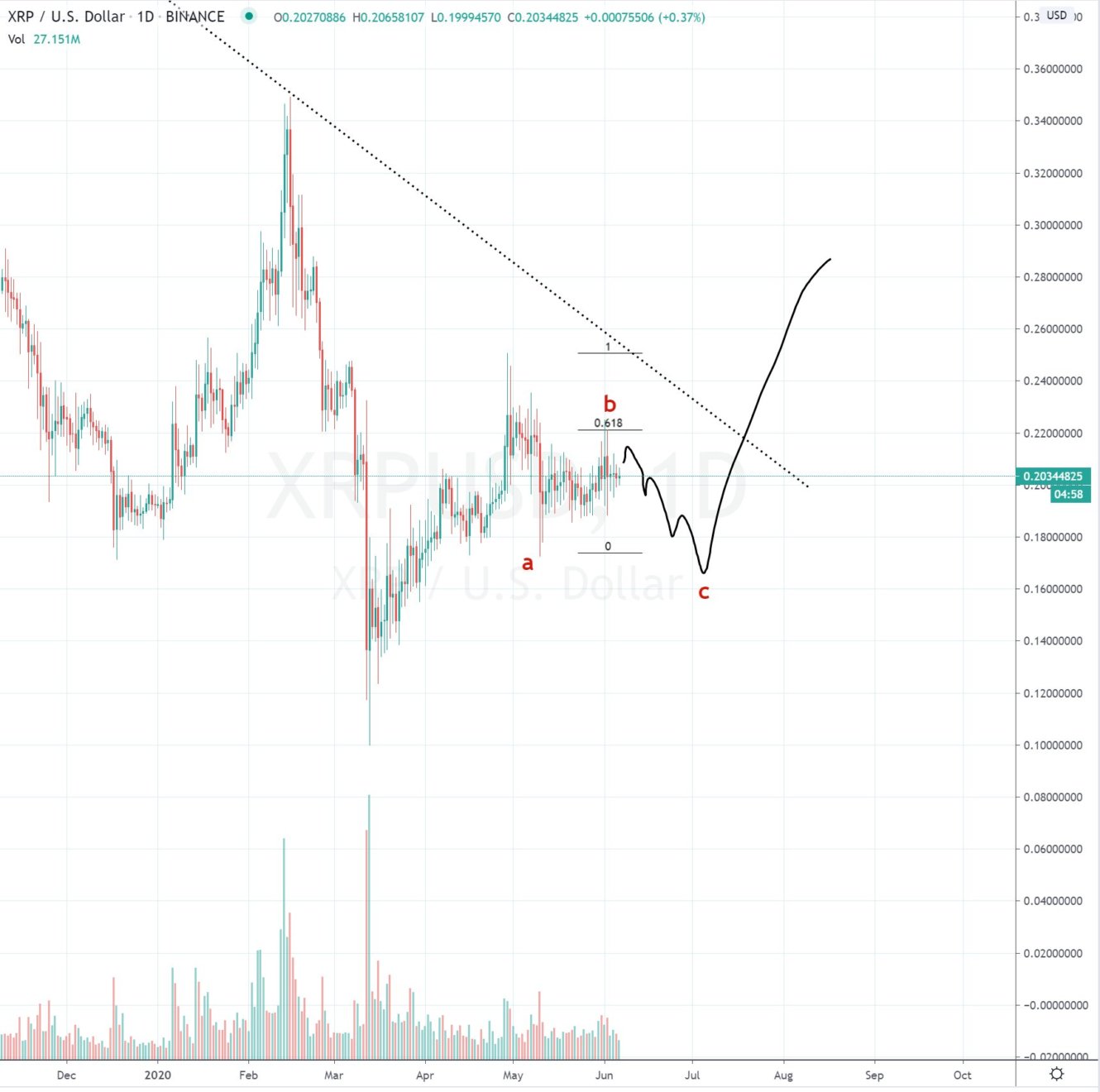 After surging above $ 250, BCH price has met selling pressure near $ 268. The price has formed a new monthly high near $ 268 and has recently started a downside correction.

More importantly, there is a major contract triangle formed with resistance near $ 255 on the 4-hour chart of the BCH / USD pair. The triangle resistance is close to the 61.8% Fib retracement level of the recent decline from a high of $ 263 to a low of $ 246.

Therefore, a breakout above the triangle resistance and $ 260 could open the door for a new rise. The next key resistance is near the $ 268 and $ 270 levels, above which the bulls are likely to target a $ 300 test in the near term.

XLM price has broken out of the long-term descending resistance line. In addition, it has moved on both the 50 and the 200 days MA, which previously created a bullish cross.

However, once the price reached the 900 satoshi area, it was rejected (June 4) and has declined since then. Price is in the process of retreating, before another breakout attempt can be made.

XLM is following an ascending support line, currently at 740 satoshi. This is the lowest level that XLM can pull back and is still considered bullish. 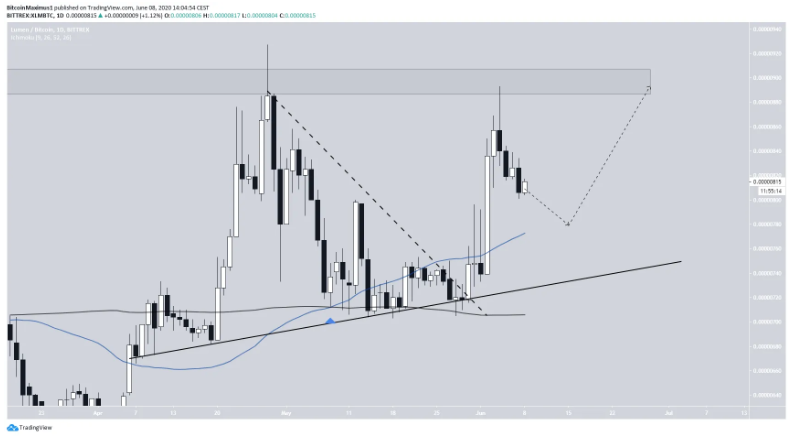 The short term chart shows mixed signals. 50 and 200 hours MA are in the process of making a bearish cross. Meanwhile, the RSI has developed a bullish divergence.

The price is following a descending support line and is expected to slow down as the technical indicators do not show a clear trend. 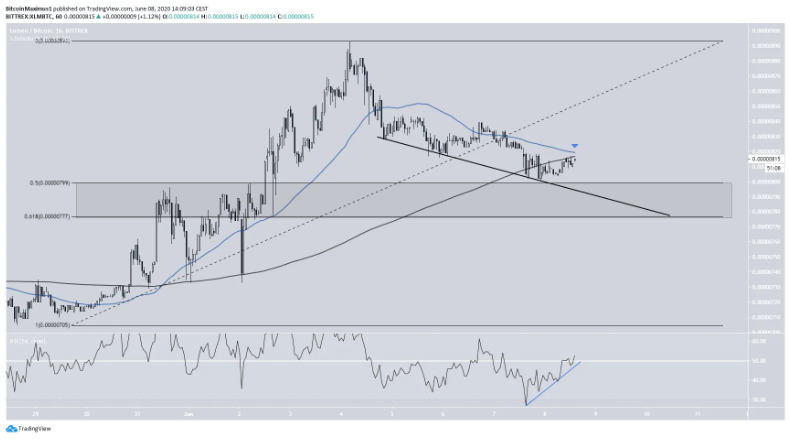 Therefore, the XLM price is expected to continue to sell off until it reaches the aforementioned reversal zone, and then another breakout attempt may be made.

What is Cex? How to register on CEX.io? How to buy Bitcoin with credit card on CEX.io

Crypto Brief on June 10: Bitcoin may see “at…

Crypto Brief on June 08: Bitcoin rebounding above the…

Crypto Brief on June 07: Bitcoin price could plunge to…