Crowd1 is a Ponzi project that is inherently familiar with the cryptocurrency community. Despite being warned quite a lot, many people still buy and sell these projects. Recently, in a new effort to lure in investors, Crowd1 created a Ponzi scheme for the cryptocurrency mobile app. 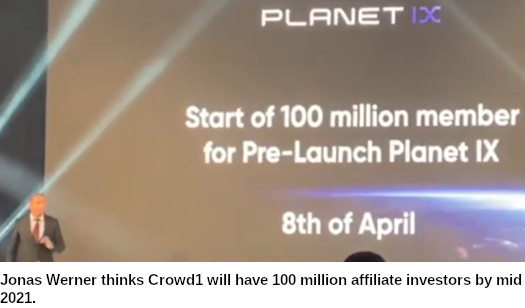 Crowd1 founder Jonas Werner gave a presentation on Planet IX – the just released Crowd1 app. In it, Planet IX is a virtual real-estate game in which Crowd1 has split up patches Earth into hexagons (pix). Crowd1 affiliates invest in pix lots through the Planet IX game app.

Contrary to the actual cryptocurrency, Crowd1 is calling for investment in a certain token. Pix appears to be an internal token that is worthless outside of Crowd1.

Why is the project considered a Ponzi project? Crowd1 dictates how valuable and profitable the pix position is, i.e. cashed out, paid for with the next investment. Not to mention the initial pumping of money that Crowd1 collects by selling its internal tokens and letting affiliates invest in pix positions, which it generates for free. Crowd1 is also jumping on the NFT bandwagon, with affiliate investors able to buy and trade “landmarks” within Platform IX.

Starting this month, Crowd1 is allowing its top affiliates to register and invest in pix Planet IX positions. Over time, affiliates with a lower rating will be able to sign up. Once Crowd1 preloads Planet IX with existing affiliate investors, the public will be encouraged to register and lose money to them.

Crowd1 has stated that their existing affiliates have invested in 48 million pix placements. Planet IX is currently scheduled to go public in July 2021.

The move to crypto by Crowd1 followed The move to cryptocurrency after Crowd1 captured the attention of regulators in fifteen jurisdictions. This will likely put great pressure on the Ponzi scheme to maintain regular banking channels.

Over the past month, China has stepped up its crackdown on Bitcoin and the crypto market in general. Beijing…
Loading ... Load More Posts No More Posts