COSS exchange is ready to resume operations after almost 8 weeks of downtime, but is COSS a scam?

When exchanging COSS offline without prior notice, many people expected this to be yet another escape scam. In a recent update, it looks like the platform will be back.

Cryptocurrency exchange COSS has confirmed that it was acquired by a group of investors, while more than 200,000 users are still unable to access their accounts.

The Singapore-based exchange shut down user accounts in early 2020, under the guise of system updates. At that time, users are informed that the process will take a month; the deadline will be approaching in the next few days.

The identity of the investor has not been disclosed, as well as the purchase price. However, it is expected that the acquisition will allow users to access their accounts faster.

The lockout started on January 8, and understandably, some investors began to get nervous. Several concerns are emerging around COSS’s solvency before locking out, with research showing that the company may have been bankrupt at the time of lockout.

Some speculate the company is preparing to flee with locked-in user money, though the basis for these allegations at this stage is unclear.

The return of COSS

When exchanging COSS offline without prior notice, many people expected this to be yet another escape scam. In a recent update, it looks like the platform will be back.

According to an email sent to the user exchange, the company will soon resume its service. The relaunch was announced on March 4. At the same time, COSS also introduced new management. Besides, COSS said the exchange partnered with XHUB – a financial and commercial technology company. 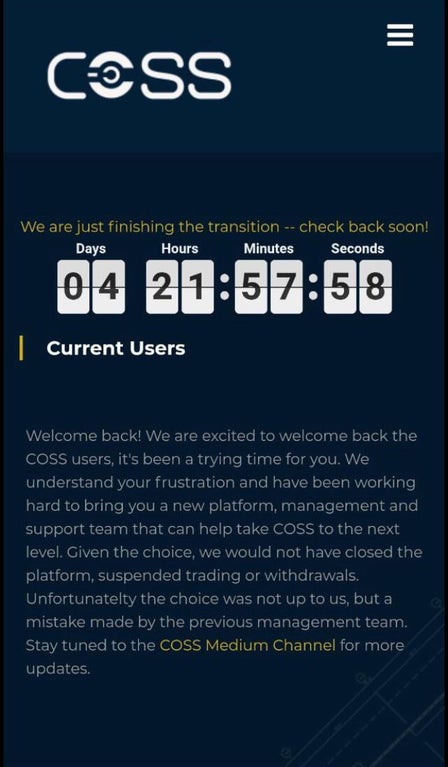 Both deposits and withdrawals will be activated on March 4, 2020. Massive withdrawal queues are somewhat expected, as most people lose faith in this trading platform completely.

Blaming some of the current problems with the previous management team is also a relatively cheap tactic. That being said, many people are never happy with the team before, for many reasons. One can only hope that things will improve from here on out, both in terms of user experience and management.

But is COSS a scam?

Some users have claimed that COSS is a scam and posted these discussions on Reddit. There is even a post that recommends people be careful with COSS and Rune Evensen.

A Shitcoin in a Sea of Shitcoins from r/COSS

The rune successfully escaped the scene, and no one knows about the new owner. No old users will be allowed to use their accounts unless the 3rd KYC is completed. KYC gimmick is basically to buy some time because COSS has no proof of funds and they will hide behind the excuse that they are overwhelmed with KYC requests.

And you, what do you think about this case?

India: The Supreme Court ruled that the RBI cryptocurrency ban is unconstitutional

Chiliz integrates the oracle technology of Chainlink to expand the utility of its Socios.com platform