[Coinlist] What’s Next For Gods Unchained 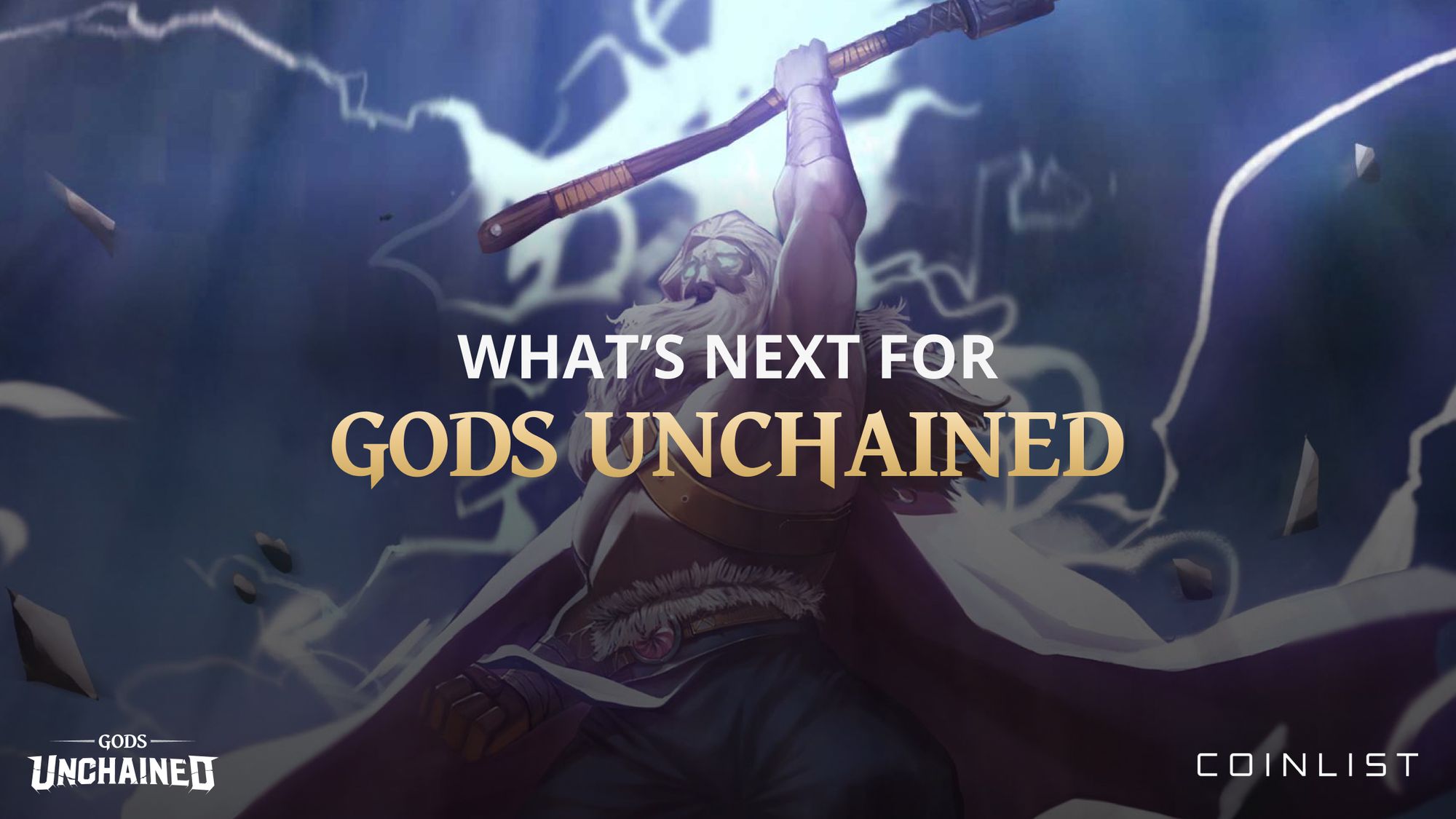 Last October, the Gods Unchained (GODS) token sale on CoinList added more than 20,000 new token holders to the Gods Unchained community with over $10M in GODS tokens purchased. Since then, we’ve launched trading for GODS on both CoinList and CoinList Pro. With the token unlock and distribution taking place this week, we caught up with the Gods Unchained team to see their progress in recent months.

1. A lot happened for you in 2021, how is the Gods Unchained team feeling?

2021 was a year of growth for Gods Unchained. We moved our marketplace to Immutable X, the Layer 2 solution that has saved us and our users millions of dollars in gas fees, making it easier for game items to be traded. When the GODS token went live, we opened The Forge, allowing users to spend GODS to create NFT cards. Here are some numbers to illustrate where we were 12 months ago and where we are today:

2. What’s on the horizon for the GODS token? What can token holders expect from GODS as far as utility is concerned?

We have a lot of this info in our whitepaper, but here’s an update on where we’re at with some of the key players, as well as what we have live now:

1/ GODS staking: Staking rewards will be distributed to all users that qualify as being active stakers. These rewards will be distributed from the Staking Rewards Pool, which consists of GODS tokens funneled in from acquisition actions made in the Gods Unchained store and the Forge. From as early as next week, tokens will begin seeding from those already spent in The Forge to the staking rewards pool so that when the staking goes live later in the year, the rewards pool will be stocked and ready.

Rewards will be claimable by all users who qualify at regular 7 day intervals, and will provide an amount of GODS to each user proportional to the lowest amount held in their Immutable X account.

2/ GODS governance: As a recognition of those who play and hold tokens, GODS token holders will be able to vote on token-related proposals via decentralized governance. Proposals will include topics such as:

3/ The Forge and NFT creation: Last year, we launched The Forge with NFT card creation (known as ‘fusing’). This is where players can use GODS tokens to upgrade their cards from simple game assets to tradable NFTs. The next step will be working on fusing different qualities of NFTs/cards. At the moment, multiple non-NFT plain cards can be fused into a shiny NFT meteorite card. We are now working on the functionality to fuse these into higher tiers, which is a lot more complex but very exciting. Here’s a diagram to help those who haven’t gone through the Forge understand the experience.

4/ Purchasing NFT cards using GODS: The Gods Unchained store is the first point of contact when new NFT expansion sets enter the ecosystem. The cards from these sets are then traded between users on marketplaces that utilize Immutable X’s Layer 2 technology. Involving the GODS token in these functions is a key factor in giving the token meaningful utility, which is why 20% of all primary sales and 20% of secondary trading fees in Gods Unchained will be paid for in GODS.

Here’s how it will work: Purchasers will be able to choose whether they want to spend their own GODS on a purchase to save some ETH/USD, or whether they would prefer to save their GODS for a different use. If the user opts not to use GODS for a payment, or doesn’t have enough tokens to cover the fee, the 20% fee will automatically be swapped to GODS on the open market.*

We’re excited by this as this function not only ties GODS to the heart of the economy, but also ensures GODS moves sustainably through it. After a primary sale or secondary trading fee is actioned, the GODS tokens will be moved to the staking rewards pool (mentioned above) where they will be distributed to all users that qualify as being active stakers.

5/ Daily play-to-earn systems: We currently have a play-to-earn event, ‘Blessing of the GODS’, running which lets users earn fractions of GODS through gameplay achievements. The team is working on pushing live a system which rewards players with GODS on a daily basis, with additional points earned based on the cards users are playing with. Decks with NFT cards will earn more points, with higher shine cards earning even more. This system provides further incentives and use cases for players to fuse and trade cards.

3. And what about Gods Unchained itself? What can we expect to see from the game?

There’s a lot to come with the game, but in order not to ruin the gaming experience achieved through the likes of future expansion sets (e.g. new NFT card sets, we can’t disclose many details. But here’s a high-level overview of what we’re working on.

Not available for residents and citizens of the United States, China, Australia, Canada, and CoinList’s unsupported jurisdictions.

This post is being distributed by Amalgamated Token Services Inc., dba “CoinList,” or one of its subsidiaries. Use of the CoinList website is subject to certain disclosures, restrictions and risks available here.

Nothing in this post shall constitute or be construed as an offering of securities or as investment advice, tax advice or investment recommendations (i.e., recommendations as to whether to enter or not to enter into any transaction involving any specific interest or interests) by CoinList or any of its affiliates.

What Is League of Kingdoms (LOKA)? The 26th Project On Binance Launchpad

[Chainlink] How To Build an NFT Marketplace With…

[Polygon] From Rollup to Validium With Polygon Avail

Bitcoin price is testing an important support zone, although…

[Chainlink] How To Build an NFT Marketplace With Solidity and Hardhat

The share of Shiba Inu (SHIB) being burned increased by 800% to a new record of 12.8 billion tokens shortly after…
Ripple News

Bitcoin price declined by nearly 5% from a high of $30,654 yesterday, tracking losses in U.S. stock markets. The…
Breaking News

[Chainlink] How To Build an NFT Marketplace With Solidity and Hardhat

Non-Fungible Tokens (NFTs) have captured the imagination of the Web3 community. While the most powerful NFT use…
Loading ... Load More Posts No More Posts